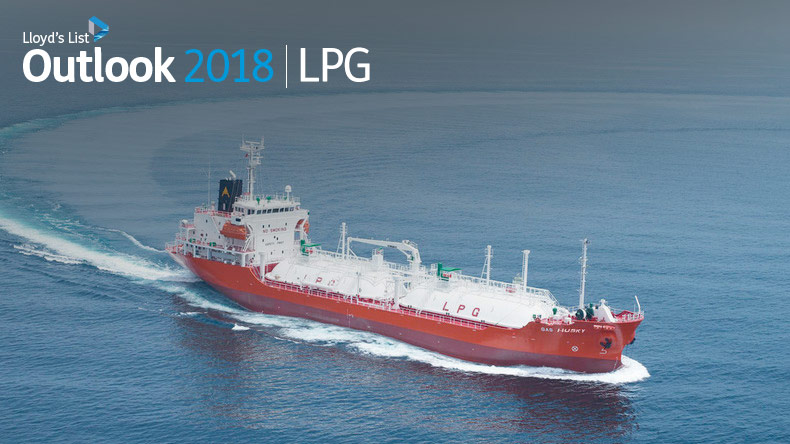 CAUTIOUS optimism is lingering over the liquefied petroleum gas shipping market as a greater sense of balance is leading the industry to whisper about an imminent upturn in freight rates in 2018.

Seaborne LPG trades are expected to show a compound annual growth rate of 8%, up from 64m tonnes in 2013 to 94m tonnes in 2018, data from Epic Gas shows. Supporting the robust LPG demand will be the rapidly urbanising populations in two of the world’s largest economies — India and China.

At the same time, US exports are capturing a growing share of the incremental demand for LPG, adding to the overall tonne-mile demand.

However, the demand story was just little more than a crutch for the sector in 2017, as vessel oversupply stifled the market, pushing freight rates to multi-year lows.

In 2018, however, falling vessel supply fits in well with the outlook for demand for owners.

LPG shipping is nearing the end of its hangover amid the emergence of US LPG exports, JP Morgan said in a report, adding that materially slower growth of the VLGC fleet — which accounts for over 65% of the total capacity in operation — will begin to tighten the market in 2018. Given the dynamic demand situation, the bank sees this sector as having potential for high reward.

According to Lloyd’s List’s annual survey of forecast freight earnings, VLGCs would earn around $18,550 per day in 2018, an improvement of 25.6% compared with this year’s average.

US output and pipeline expansion. US expansion of LPG production and logistics capability is to continue driving shipping demand forward.

Wood Mackenzie has predicted US LPG production to experience healthy growth next year amid rising shale production, with propane output from gas plants increasing to 150,000 barrels per day.

Based on government data, BW LPG estimated US production would amount to 82.4m tonnes in 2018 compared with 78.6m tonnes this year.

On the logistics side, Energy Transfer Partners’ Mariner East 2 pipeline project could be a potential game changer.

The 275,000-bpd pipeline, due to come online in the second quarter of 2018, will transport natural gas liquids from the Marcellus and Utica Shales areas in Western Pennsylvania, West Virginia and Eastern Ohio to destinations including the Marcus Hook terminal in Pennsylvania.

With storage at Marcus Hook limited, LPG would need to be exported once transported there, Stifel said. There should be “an inelastic increase of exports” that will translate into 3%-4% increase in global LPG trade, and handysize LPG tankers could be the main beneficiaries, it said.

Easing vessel oversupply. Banchero Costa’s head of research Ralph Leszczynski expects overall net fleet growth to be just 2% in 2018, against an increase in tonne-mile demand of at least 5%-6% next year. For that reason, Mr Leszczynski strongly believes that the spot market should start improving next year.

Data from Clarksons shows overcapacity could ease in the VLGC segment, with a slower pace of newbuilding deliveries. The number of VLGCs trading in this segment increased from 240 vessels at end-2016 to 259 at end-October, and is expected to be around 273 by end-2018.

There is also some scrapping potential, especially in view of the upcoming new International Maritime Organization ballast water management and bunker regulations.

Avance Gas president Christian Anderson told Lloyd’s List that there is likely to be increased recycling of older tonnage as more investments are needed to keep those ships trading.

“Voyage costs are bound to increase from 2020 as bunker costs will increase and some owners will take this cost by installing scrubbers,” he said.

Generally speaking, owners with a fourth or fifth special survey between 2018-2020 and beyond will have to consider all options when it comes to complying with current and future environmental legislation, Fearnleys analyst Martin Kjendlie said.

Indian demand. Much of the growth for LPG in recent years has come from India, where LPG is substituting biomass as a household fuel as the country’s rural population urbanises by the millions every year.

LPG as marine fuel. A more long-term development that could spur huge demand is the attempts to use LPG as maritime fuel.

In September, Dorian LPG announced it would conduct an in-depth cost-benefit analysis of using LPG to meet the new global emissions standards with American Bureau of Shipping.

Astomos Energy has also signed Memoranda of Understanding with Statoil, Australian LPG marketer and distributor Elgas and Kuwait Petroleum Corp to explore ways to use LPG as marine bunker fuel.

However, Mr Anderson says that the industry still need some technical developments before an LPG-fuelled ship is 100% tier III compatible.

China-related shipping demand. Owners that are betting big on China’s rising demand could face headwinds in 2018, with likely less propane dehydrogenation capacity coming online in the country and its preference for Middle Eastern barrels.

In large part due to requirements from rising PDH capacity, China’s seaborne imports grew to 15.9m tonnes in 2016 from 3.4m tonnes in 2011. BW LPG data showed import growths remained strong in the first half of 2017.

But there are limited new PDH projects starting up in 2018, with one or two units starting up near the end of 2018—so the impact on LPG demand will be reflected mainly in 2019, Wood Mackenzie said.

China’s eight PDH plants, which have been commissioned from 2013 to now, can consume 5.5m tonnes of propane per annum when running at full capacity, figures from Sinopec and Platts suggested. Industry estimates showed that two Chinese PDH plants owned by Fujian Meide and Hengli Petrochemical, which can use up to 1.3m tonnes of LPG, could come online in the latter part of 2018 but delays are possible.

Also, Wood Mackenzie expects China to source propane primarily from the Middle East and said that “US cargo will be the second propane source for China's PDH production”.

The pricing advantage of US propane has weakened against Middle Eastern cargoes in recent months, curbing longhaul arbitrage shipments. While Middle Eastern producers tend to set their prices based on Asian demand, the US prices are mainly determined by domestic demand.

“We do expect the US trade to Asia to be ‘volatile’ during next year,” Mr Andersen said, citing price differentials between regions will be key.

Toss-ups. The expanded Panama Canal has been popular in the LPG shipping industry since its commercial operation began in 2016, but congestion is a major issue.

The cargoes and vessels tracker Kpler recorded a monthly average of 37 LPG carriers passing through the canal southbound this year, compared with 22 vessels in 2016. However, the use by VLGCs has been on a downward trend.

In January-May, a monthly average of 30 VLGCs were recorded, compared with 20 VLGCs in June-October. “Slot availability is currently proving a challenge,” Kpler said.

Other market participants also noted the difficulty in booking northbound transits for ballast voyages from the Pacific.

“Although the Panama Canal is increasing its capacity, I think the VLGC market will continue to struggle with booking slots,” Mr Andersen said. “The main reason being that VLGC trading is basically a 100% spot market, difficult to be planned long time ahead.”

NORWAY's MPC Container Ships plans to raise between $150m and $200m in gross proceeds via a private share placement in its quest to beef up its boxship fleet.

"The net proceeds from the private placement will be used to pursue future investments in container vessels and general corporate purposes. The company is in the final stages of acquiring a significant number of feeder container ships," it said in a statement.

MPC has engaged DNB Markets and Fearnley Securities to help with the transaction that will target Norwegian as well as international investors. Pricing has been pegged in a range of NKr47-NKr49 per share.

THE US has imposed further sanctions on a number of Chinese companies as well as North Korean shipping firms and vessels in connection with the financing of the rogue state's nuclear and ballistic missile programmes.

The Treasury Department's Office of Foreign Assets Control slapped bans on an individual, 13 entities and 20 vessels for their continued commercial links to North Korea and transportation networks that aid the state in terms of operations and revenue generation.

"As North Korea continues to threaten international peace and security, we are steadfast in our determination to maximise economic pressure to isolate it from outside sources of trade and revenue while exposing its evasive tactics," Treasury Secretary Steve Mnuchin said in a statement.

SOVCOMFLOT said it plans to further appeal the decision by a UK court to award damages to shipowner Yuri Nikitin.

The Russian state-owned tanker group's challenge a High Court decision to award $58.3m in damages to Mr Nikitin last year was heard in the Court of Appeal last month. The ruling dismissing the appeal was published on Tuesday.

Sovcomflot said it "intends to seek permission to appeal" and has seven days in which to submit papers to the Supreme Court.

EUROPE'S shipbuilding nations lack the necessary wherewithal to individually handle intensifying competition from the other side of the globe and should consider adopting a concerted approach, according to a report funded by the European Commission.

While the document said the European maritime technology industry leads the world in aggregated production value of shipbuilding and ship-systems manufacturing, "there is no clear targeted European shipbuilding policy in place to offer an integrated and unified approach to the international competition''.

It expects Europe's shipbuilding market for technologically advanced and high value-added vessels to be gradually eroded if markets for the major commodity-type vessels such as dry bulk carriers, tankers and containerships does not see a sustained recovery.

THERE will likely be no respite for crude oil tanker freight rates in 2018, even after the sharp drop this year, as demand for the commodity slows, according to a Drewry report.

NEW YORK-listed Frontline said its loss in the third quarter was due to a rate environment that was the weakest the company had experienced since 2013.

DEMAND for liquefied natural gas is poised to surge in the coming weeks as China looks set to take sterner measures to meet air quality targets for the winter.

KOREA Development Bank is to issue refund guarantees for the latest orders secured by STX Offshore & Shipbuilding within days, a spokesperson in Seoul told Lloyd's List.

THE labour union at South Korea's Sungdong Shipbuilding & Marine Engineering is calling for state help to revive small and mid-sized shipyards in the country after reports that the Export-Import Bank of Korea, SSME's largest shareholder and creditor, had concluded that it would be more profitable to shut down the business.

GLOBAL freight forwarding and supply chain management provider Damco has marked a new phase in its intermodal services with the arrival on schedule in France of its first block train service from China.

CPO Holding's Christoph Geck-Schlich is to join ER Schiffahrt early next year, according to sources at both companies.