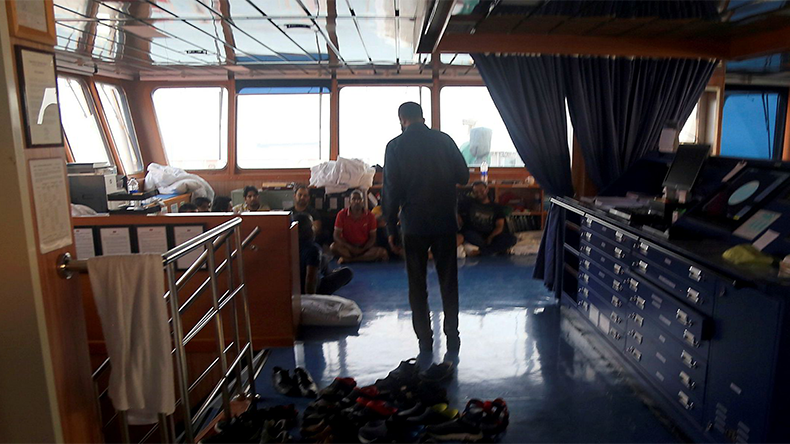 Stena Bulk chief executive Erik Hanell reveals to Lloyd's List that he has explored every avenue to secure the release of Stena Impero’s crew being held in Iran. He talks to Lloyd’s List about the diplomacy under way, known and unknown, as concern grows for the welfare of the men who have been confined to their vessel for 26 days at the centre of an international diplomatic stand-off. Mr Hanell was speaking after the International Bargaining Forum designated the Strait of Hormuz as a Temporary Extended Risk Zone, a move that entitles seafarers to pay bonuses and doubled death and disability compensation.

Meanwhile, Iran's state TV station says that documents have been exchanged with the UK that could pave the way for the release of the very large crude carrier Grace 1, which was detained off the coast of Gibraltar last month.

St Kitts & Nevis is the latest flag registry ensnared in US sanctions against Iran after the aframax tanker Bonita Queen was tracked by Lloyd's List Intelligence loading crude at Kharg Island. St Kitts & Nevis de-flagged the vessel shortly after learning of its movements.

FIATA — the main trade association for freight forwarders — is to seek dialogue with the top carriers in the wake of recent moves by big name lines to impose penalties of up to $15,000 per teu on shippers who misdeclare cargoes.


DFDS has downgraded its growth expectations for 2019 due to the uncertainty caused by Brexit, which has already weighed down results, despite bigger earnings and expanded business ventures. The Danish ro-ro operator claims to be well prepared for a no-deal Brexit. Its customers, however, are not.

Frank Tsao Wen King, founder and chairman of Singapore-based IMC Group, has died at the age of 94.

Accountancy and advisory network Moore Stephens has formalised a group approach to international shipping that, it says, was underdeveloped in the past, despite its strong 75-year involvement in the industry.

Suggestions that South Korea may be ready to join a US-led coalition in the Strait of Hormuz have gathered momentum, with reports surfacing that it is sending a fresh batch of troops to the Gulf of Aden for anti-piracy efforts.

Yang Ming remained in the red in the second quarter of 2019, amid pressure from the escalating Sino-US trade war.

Bulkers owner and operator Pangaea Logistics has outperformed the market in the second quarter of this year, according to chief executive Ed Coll, despite turning in a reduced profit.

Shipping law firm HFW is opening a Monaco office next month, after hiring seven lawyers from the old Ince & Co affiliate in the principality.

Handysize dry bulk shipowner Pioneer Marine announced second quarter profits of $2.2m despite declines in the market and feels optimistic for the remainder of 2019.