Net closing in on shipping’s greenwashed announcements at COP27

Amid the high-profile political pledges and green corridor hot air, there is increasing scrutiny and scepticism around greenwashed claims and plans that lack depth, detail and credible targets 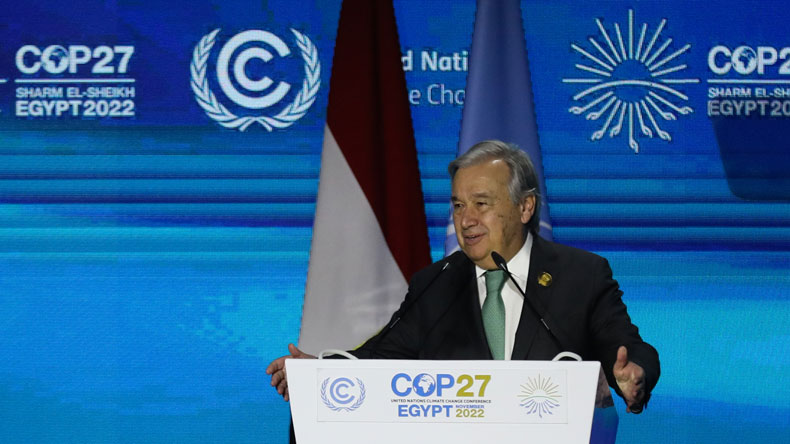 FOUR days into the COP27 climate summit, which had been billed as a showcase of implementation and progress towards zero carbon shipping, there have been nearly 50 significant new announcements promising emissions reduction in shipping.

Dozens more are scheduled before the summit closes in Egypt on November 18. Tangible details of progress achieved in previously pledged plans have been notably less visible.

The headline shipping announcement at the last COP saw 24 governments promise the establishment of six green corridors by 2025 under the so-called Clydebank Declaration.

In the wake of this week’s additional flurry of announcements, there are now over a dozen green corridors being developed as public-private partnerships.

However, none are operational and, as a progress study confirmed in September, limited progress has been observed in terms of scalable zero emissions fuels infrastructure, funding commitments and creation of financial mechanisms.

Industry-backed plan to catalyse supply of green fuels for maritime receives backing from Panama, Uruguay, and Norway as COP27 gets underway in Egypt

Green corridors will take several years to establish, but there is growing concern among senior industry and political delegates attending COP that the focus on new announcements and promises without substance is in danger of eclipsing the genuine progress being made elsewhere.

In some cases, announcement being made without feasibility studies or implementation plans are “borderline greenwashing,” several senior industry figures have told Lloyd’s List.

“Many of these announcements are lacking detail in terms of what they are going to deliver and by when. The question is whether we are moving beyond these headline announcements,” said Charles Haskell, Decarbonisation Program Manager at Lloyd’s Register speaking from the sidelines of COP27. “I would like to see a pause on new announcements that don’t have feasibility studies attached and partners confirmed.”

While the maritime delegations have been pushing a broader discussion at this year’s COP, highlighting the integration of shipping into the wider energy transition and the importance of resilience and social factors, the green corridors and financing have taken centre stage thanks to the prolific presence of US Special Presidential Envoy for Climate John Kerry.

He chaired the launch of the Green Shipping Challenge, during the World Leaders’ Summit on November 7, and he has slipped green corridors into almost every public announcement since.

Mr Kerry has also been pushing shipping’s involvement in the US plan launched on Wednesday to harness cash from the world’s largest companies to help developing countries cut their use of fossil fuels.

The US State Department has been trying to marshal support from governments and companies, including major shipping operators, to develop a new framework for carbon credits to be sold to business, with the proceeds earmarked to fund new clean energy projects.

While the Energy Transition Accelerator, as the programme has been dubbed, has drawn attention from senior industry officials, the plan has again highlighted the lack of substance or understanding when it comes to shipping’s involvement.

The plan is more focused on the energy sector and developing finance initiatives where they can bring in non-government money. When it comes to the maritime link, those engaged with the discussions at a detailed level concede that the focus on green corridors has lacked detail regarding the implications for fuel production.

However, beyond the set piece announcements and high-profile political cheerleading, some significant progress has quietly emerged at COP27 via the UN-led plans to counter the lack of substance being applied to emissions reduction plans and greenwashing generally.

Having set up a high level expert group at last year’s COP26 in Glasgow to examine the integrity of net-zero commitments being made by businesses, financial institutions and governments, UN Secretary General António Guterres unveiled the findings on November 8 alongside a plan for new standards to be implemented.

The new report provides corporates and investors with time-based frameworks to deliver net-zero, based on short, medium and long-term targets. But crucially, the recommendations aim to crackdown on greenwashing and “weak” net-zero pledges that the group warns could undermine efforts to deliver the ambitions on the Paris Agreement by reducing emissions in line with a 1.5°C rise in global temperatures from pre-industrial levels.

While the recommendations are non-binding, the report is effectively a UN-backed recommendation for verification programmes like the Science Based Targets initiative, which will launch a shipping specific trajectory later this year. The expectation is that the SBTI will then be used by several existing shipping programmes, possibly including the Poseidon Principles, to tighten the requirements and increase verifiable transparency of emissions reductions.

The lack of transparency or substance being attached to announcements has become a consistent theme at COP meetings and the subject of increasing scrutiny from environmental non-governmental organisations.

One report, issued by the Dutch-based non-profit World Benchmarking Alliance, this week points out that a “significant proportion” of the 17 shipping companies it assessed for their climate policies lacked depth, detail and credible intermediate targets. That, the report argued, “called into question the credibility of many of the shipping companies’ decarbonisation targets”.

Only four out of the 90 transport companies assessed have 1.5°C targets validated by the Science Based Targets initiative.

Speaking at the launch of the UN Expert Group’s recommendations this week, Mr Guterres warned companies and governments currently churning out “bogus” pledges on emissions reductions that the net was closing in on them.

“So-called ‘net-zero pledges’ that exclude core products and activities are poisoning our planet. They must thoroughly review their pledges and align them with this new guidance. Using bogus ‘net-zero’ pledges to cover up massive fossil fuel expansion is reprehensible,” he said. “Targets must cover all greenhouse gas emissions and all scopes of emissions. For financial institutions, this means all financed activities.”