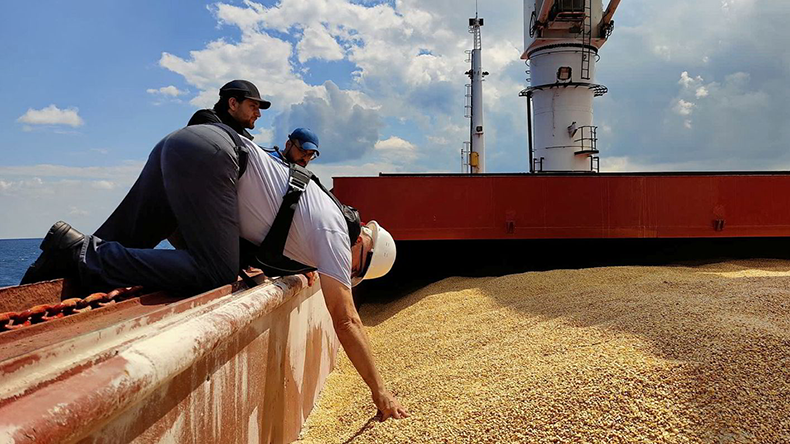 Vessels are having to wait an average of nine days to be cleared by inspectors in Istanbul because of growing demand combined with documentation and compliance issues, according to a JCC statement.

It means the time it takes for one vessel to complete a voyage to and from one of Ukraine’s export hubs under the Black Sea Grain Initiative has increased at the end of September.

The corridor deal, signed in July, allows approved ships to carry grain, other foodstuffs and fertilisers from the Ukrainian ports of Odesa, Yuzhnyi, Chornomorsk.

A ship travelling to one of the export hubs will spend 18 days waiting for inspection, nine on the inbound journey and another nine on the way out. Factor in three days needed to sail to port, three days for loading and two days to return to the Turkish inspection zones, then the total journey is about 25 days, according to calculations by the European Business Association’s grain and oilseeds committee.

Inspections, which are required under the Black Sea Grain Initiative, are conducted jointly by Russia, Türkiye, Ukraine and the United Nations.

If the inspection delays continue then vessels will spend increasingly more time sitting idle, and the export hubs will operate at a lower capacity. Shipowners and grain exporters will incur costs for these delays, and grain prices will rise, the EBA argued in an appeal to the UN.

The JCC has already increased its inspection teams from two to four to meet growing demand. Inspectors have been completing 11 inspections daily during October, up from an average of four daily inspections in August.

The EBA estimates that 25 inspections per day are needed to avoid backlog, a figure confirmed by the JCC, which has been discussing how to improve the inspection process to increase the number of inspections over the past two weeks.

Several proposals have been circulated. The UN has stressed the need for more inspectors, even on a temporary basis to alleviate the current backlog.

The increasing number of vessels now waiting for inspections is exacerbating congestion in the Sea of Marmara.

There are approximately 180 vessels waiting to enter the Bosporus from the Sea of Marmara, according to Lloyd’s List Intelligence data.

In the event the grain corridor is not renewed and if delays continue at the current rate, then some vessels could fail to fulfil their contracts if they end up stuck in inspection zones.

The Black Sea agreement is valid for 120 days from the date of signing. The initiative will be automatically extended for the same period on November 19, unless one of the parties decides to terminate or modify the deal.

The UN’s Food and Agriculture Organization cereal price index rose 1.5% in September after falling 1.4% in August. According to the FAO, the increase was due in part to heightened uncertainty about the continuation of the grain corridor and the potential impact on Ukraine’s exports, which pushed up wheat prices.

The EBA has appealed to the UN and embassies of Türkiye and Ukraine to renew the Black Sea Grain Initiative and increase inspection capacity.

Russia has expressed concerns over the corridor.

The Kremlin says its foreign trade operators are not seeing tangible results from the agreement, while President Vladimir Putin said developing countries are being deceived as they are not the main recipients of grain.

Ukraine’s Ministry of Infrastructure published data earlier this month showing most of the grain exported under the initiative is going to countries in Africa and Asia.

There have been 318 departures from the greater Odesa ports since the corridor opened on August 1, according to vessel tracking data from Lloyd’s List Intelligence.

JCC data shows just over 7m tonnes of grain and other foodstuffs has been exported as of October 11.