‘Whether it is hydrogen, ammonia, methanol, batteries — all this is fiction. Not only in my life, but also my son’s life,’ says Dynacom founder 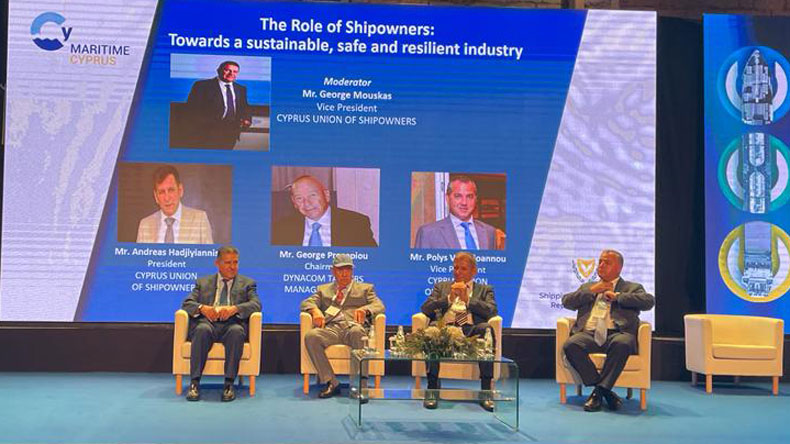 The panel in session.

ONE of Greece’s largest shipowners repudiated global regulations to cut the industry’s greenhouse gas emissions at a shipping conference in Cyprus, insisting “oil was the future” and that future fuels such as ammonia, methanol, and hydrogen were “fiction”.

“Oil will be with us for the next 100 years,” said George Procopiou, who owns a fleet of oil and gas tankers and bulk carriers.“There is no other energy that is so friendly and so easy to handle that can substitute. What it is hydrogen, ammonia, methanol, batteries? All this is fiction. Not only in my life, but also my son’s life.''

Mr Procopiou spoke at the Cyprus Maritime panel that discussed the role of shipowners and sustainability, alongside Safe Bulkers chief executive Polys Hajioannou and George Mousakas, vice-president of the Cyprus Union of Shipowners.

In a wide-ranging discourse, he aired views on European Commission interference, politicians, the stupidity of investing millions of dollars in ballast water treatment, the “lie” that Russia’s invasion of Ukraine was responsible for the high oil price, and the ineffectiveness of current global emissions regulation.

“This is not the sort of thing you say in a public forum, these are the sorts of views that are best kept private,” one participant told Lloyd’s List after the event.

Mr Procopiou’s views on future fuels and climate change simultaneously shocked and delighted the room of some 500 delegates.

Some spontaneously broke out in applause, while others looked at their phones or exchanged looks with those sitting near by.

The 76-year-old founder of Dynacom Tankers Management, Dynagas and Sea Traders has ordered more than 140 ships over his career and is one of Greece’s most prominent private shipowners.

He told the conference that International Maritime Organisation rules to cut greenhouse gas emissions in shipping were creating a bigger problem than the ones they were designed to fix as regulatory uncertainty had cut newbuilding orders.

‘Even though progress has been significant, more is needed to bring us to 5% and beyond,’ says joint study

He also criticised regulations that required shipowners to spend millions on installing ballast water treatment systems “just because of one drop of ballast... that you can compare with billions of cubic metres (in the ocean).”

Mr Procopiou also reprised an often-used analogy to absolve shipowners of responsibility for emissions ahead of the inclusion of maritime in the European Union emissions trading system from 2023 or 2024.

Politicians were supporting policies that discouraged investment in fossil fuels “but they were abandoning Plan A without having a plan B in place”, he said.  This, rather than Russia’s war on Ukraine, had lifted the oil price, he maintained.

Mr Procopiou’s views are considered to be representative of a small circle of influential but private shipowners in Cyprus and Greece, who believe that market forces and the cyclical nature of shipping are best understood and controlled by themselves. They are rarely aired in public forums.

No alternative zero-carbon fuels are available at scale, with ammonia and methanol produced from renewable energy, along with biofuels touted as among the most viable options for shipowners.

Cyprus, Greece and Malta account for about 70% of Europe’s shipping capacity.

More than 300 companies are based in Cyprus, a key shipmanagement centre and the third-largest flag registry for the EU.

Panama and Kenya enter race for top job at IMO

Reducing vessel speed is ‘most powerful way to cut emissions’