Vladivostok recorded a 17% increase in containership arrivals in the third quarter. Collectively, the far eastern ports of Vladivostok and Vostochnyy handled over half of all arrivals, up from 31% in the past year

The downward trend in containership arrivals in Russia, which was caused by the withdrawal of services by major container lines, appears to have softened in the third quarter 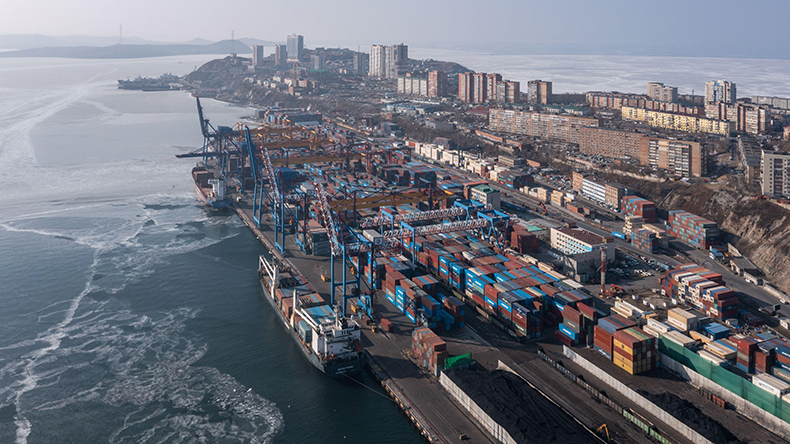 ASIAN partners are propping up boxship trade in Russia as major container lines pull back from the country’s Baltic and Black Sea ports.

Containership arrivals into Russia totalled 558 in the third quarter, according to Lloyd’s List Intelligence vessel-tracking data.

That is 8% fewer inbound journeys than in the second quarter, indicating the downward trend in arrivals could be softening.

Major container line operators and third-party feeder operators began reducing or phasing out their services to Russia in March in response to the incursion in Ukraine.

Boxship arrivals started to decline that month, but activity levels have been recently buoyed by a growth in Russia’s far east trade.

Vostochnyy, another eastern port, received 15.9% of inbound vessels. Combined, they accounted for 54% of activity. This is up from 31% over the same period in 2021.

St Petersburg, Russia’s other main port for containership services, received just 55 vessels between July and September. That is 45.5% fewer than in the previous quarter and 75.6% lower than the number recorded over the same period in 2021. It handled just 9.9% of all containerships arriving in Russia in the third quarter, down from a 22.3% in the past year.

“Sanctions have been successful in this aspect as imports such as critical components are completely down,” said Dynamar senior shipping and ports consultant Frans Waals.

Russia’s laden container trade declined 50% in July compared with the past year, according to Dynamar data.

Only the domestic Arctic trade posted growth, but Mr Waals noted that the volumes there are small.

Only a handful of Russia’s ports recorded a year-on-year increase in boxship callings in the third quarter.

The far eastern ports of Petropavlovsk-Kamchatskiy and Vostochnyy saw a 22.7% and 1.1% increase, respectively.

There were an additional three ports in the area, Anadyr, Egvekinot and Nakhodka, that saw arrivals in the third quarter after no activity in 2021. These figures are small in terms of sheer volume.

The northern ports of Arkhangelsk and Murmansk were also in the positives, with a 16.7% and 13.3% year-on-year increase in boxship arrivals in the third quarter.

Containerships calling to Arkhangelsk and Murmansk are largely facilitating trade between Russia’s northern ports or travelling to and from the far east.

The Kremlin stressed the strengthening of Russia’s economy in the country’s far east at this year’s annual Eastern Economic Forum held in Vladivostok.

Asia is home to what Russia describes as “friendly” countries, who are more open to trade.

“Far Eastern carriers are picking up the cargoes that European carriers no longer touch,” says Xeneta chief analyst Peter Sand. “More of it is now going through the eastern Russian Pacific ports. Not so much via the Baltic Sea anymore.”

He notes that European importers are shying away from rail transportation because of sanctions, allowing trans-Russia cargo to move more easily.