The strange death of Somali piracy

With no attacks on merchant vessels in the Indian Ocean for the past four years, leading shipping organisations have decreed the problem all over. That’s as maybe, but a resurgence can’t be ruled out until Somalia finds the stability it has not enjoyed for 30 years and more 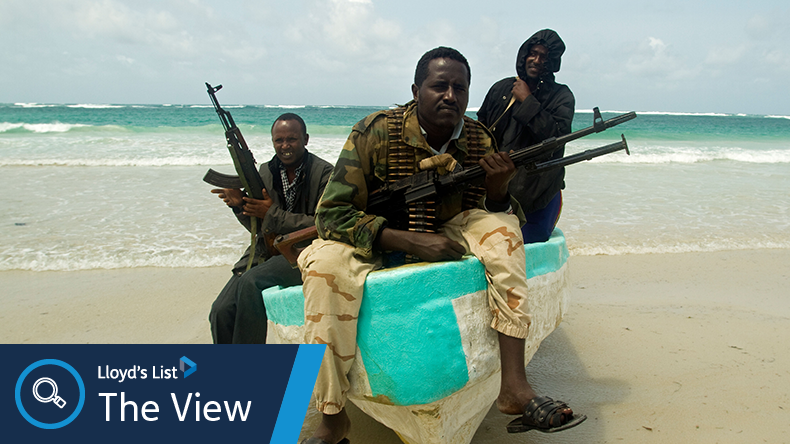 Source: Images & Stories / Alamy Stock Photo The Somali pirate crisis was absolutely awful for all involved. At some points, incidents occurred not just daily, but several times a day.

TWO issues dominated the then-printed pages of Lloyd’s List circa 2010. One was the frightening sums of money shipowners across the board were losing in the wake of the global financial crisis. The other was the frightening frequency with which their ships were brutally assailed by Somali pirates.

On those fronts, if few others, we are living in happier times. Sustained profitability is back for the first time since then, at least in most segments, and Somali piracy appears to have gone away.

With no attacks on merchant vessels in the Indian Ocean for the last four years, six leading industry organisations led by the International Chamber of Shipping and BIMCO have decreed that as of the start of next January 1, the region will no longer be designated a high-risk area.

Additional premiums are still payable, but the Joint War Committee is likely to come into line in three to six months, according to the few underwriters still behind their desks in the middle of August.

What better time for the rest of us to pause for reflection. This was a big story in its day, debated at the general assembly of the United Nations and in much of the international media.

It even generated the subject matter for the thriller Captain Phillips, the first Hollywood piracy movie to feature a boxship captain played by Tom Hanks rather than a swashbuckling Errol Flynn or Johnny Depp character in a somewhat romanticised male lead role.

The Somali pirate crisis was absolutely awful for all involved. At some points, incidents occurred not just daily, but several times a day.

Countless vessels came under fire or were boarded. Many were hijacked, which meant sleepless nights for owners, and ransom bills for P&I clubs that ran to an estimated $238m in 2010 alone.

The cost to the world economy, at least at the peak of the problem, was on some reckonings up to $6.0bn a year. By this stage, container lines were imposing piracy risk surcharges of up to $170 per feu.

Somali piracy additional premiums set to stay for time being

‘The Joint War Committee will not remove the area immediately, primarily to demonstrate that they make their own decisions and do not blindly follow advice from others,’ says war risk underwriter

But those who really bore the brunt were the thousands of seafarers held hostage for weeks, months, and sometimes even years. Over 62 died in captivity, with 25 believed to have been murdered. To all of them, we should extend our heartfelt thanks.

Somalia has been in the grip of anarchy since the ouster of military strongman Mohamed Siad Barre in 1991. The country rapidly descended into Hobbes’ state of nature instantiated; no government in Mogadishu meant no police on land and no navy or coastguard at sea.

Well-meaning liberal journalists promulgated the line that piracy arose around 2000 by way of justified response from fishers angry about the invasion of their waters by western industrialised trawlers.

Whatever credence that explanation carried in the early days, hijack for ransom soon moved on to other vessel types, becoming a straightforward criminal enterprise entirely detached from the righteous indignation of the wretched of the earth.

The young men who undertook the dangers of navigating skiffs hundreds of miles out in the hope of capturing a chemtanker were sometimes paid the equivalent of a year’s local salary for a single successful mission.

For ‘a year’s local salary’, read a few thousand bucks, for work with an inevitable substantial death toll. The bulk of the payoffs went to a handful of crime chiefs, reputedly enabling at least two of them to live openly as multimillionaires in London.

Limited organised western naval intervention arrived on the scene in 2001, in the shape of US-led Combined Task Force 150, and by 2008, World Food Programme shipments were being protected by European Union navies grouped as EU Navfor.

The private sector also responded with the provision of armed guards on board, which soon became an express stipulation of war risk insurers.

The turning point came in 2012, when EU Navfor expanded its remit, reducing cases of piracy to 75 from 237 the previous year. Again, the industry needs to offer its deepest gratitude for what has been achieved since, which has slowly brought us to where we stand now.

Meanwhile, Somalia has moved on from failed state to fragile state, with the establishment of a nominal federal government 10 years ago.

These matters are all relative. Large sections of the south are controlled by an Islamist militia, while the more economically developed north has declared itself independent, even if no-one else recognises its sovereignty.

The obvious question now is whether the hiatus in hijacks is temporary or permanent. While the picture facing Somalia looks not as grim as at some points in its sorry recent history, there is little indication that it is on the brink of stability, either.

The Horn of Africa is currently undergoing its third drought since 2010, with 230,000 Somalis already facing famine. With supplies of grain from such traditional providers as Ukraine still severely constrained, their plight will be even harder to alleviate than usual.

Desperate people can be driven to desperate expedients. Despite the extensive array of other troubles on the world’s plate right now, the need for a fix for Somalia should never be forgotten.

Ship towed to Somalia after a week drifting in pirate waters