Analysis of war loss and damages casualty reports show attacks on non-military vessels have dropped, while the most recent attacks have reportedly been carried out by Ukrainian forces

After months without confirmed strikes Ukrainian forces allegedly carried out two major attacks in June, while Russia has gone silent 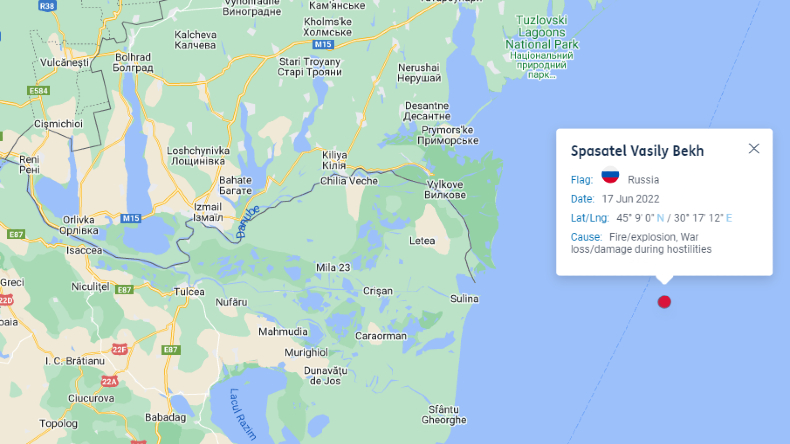 A TOTAL of 17 civilian ships have been attacked since Russia invaded Ukraine on February 24, but no casualty incidents have occurred since June.

Over 75% of recorded attacks on non-military vessels took place during the first three months of the war, according to Lloyd’s List Intelligence data.

During this period Russia was the main aggressor, launching attacks on ships near or docked at Ukraine’s ports.

During just the first three days of fighting four vessels were hit by Russian missiles and rockets. One was allegedly struck by mistake.

The tanker was also struck, and reportedly came under fire again on July 7 as it was drifting without crew in Ukrainian territorial waters. The ship has been described as an “environmental time bomb” due to the diesel fuel remaining on board.

Two Russia-flagged ships were attacked during the first days of the war in Russian territory, bulk carrier SGV-Flot (IMO: 8033089) and Seraphim Sarovskiy (IMO: 8867222).

It is thought that these incidents are two of five attacks carried out by Ukrainian forces on Russian civilian ships. Another vessel, general cargoship Sormovskiy 3064 (IMO: 8702252), was hit by a rocket attack off Taganrog, Russia, on March 12.

It cannot be confirmed whether Ukraine did attack these three vessels. Ukraine’s deputy permanent representative to the International Maritime Organization, Yevgen Lisuchenko, said Ukraine did not attack any commercial vessels in the region.

Russian attacks against civilian vessels continued into March and April, with three incidents recorded each month.

A Panama-flagged general cargoship with container capacity, Helt ((IMO: 8402589), was reportedly used by the Russian navy as a shield in an advance on Odesa. An explosion caused the vessel to sink, but all six members of crew were able to abandon the vessel and were later rescued.

Only five war loss and damages reports have been recorded since May. The last attack carried out by the Russians was on June 1.

Ukrainian forces are allegedly responsible for the two most recent attacks, which took place on June 17 and 20.

Russia-flagged tug Spasatel Vasily Bekh was struck by two Harpoon missiles on June 17. There were 33 people on board at the time, 23 were injured and 10 missing.

The tug was transporting ammunition, weapons and personnel of Russia’s Black Sea Fleet to Snake Island. The vessel reportedly sank, but the Russian Defence Ministry has not confirmed the loss.

Ukraine has since reclaimed Snake Island.

Chornomornaftogaz is an oil and gas company located in Crimea. It is currently sanctioned by the US, the European Union and the UK.

The drilling platforms were seized by Russia in its 2014 invasion of Crimea.

There have been a series of apparent Ukrainian attacks on Crimea recently, potentially signalling the beginning of the country’s counteroffensive in the south.

Overall, Russia is allegedly responsible for 12 attacks on civilian ships, and Ukraine five.