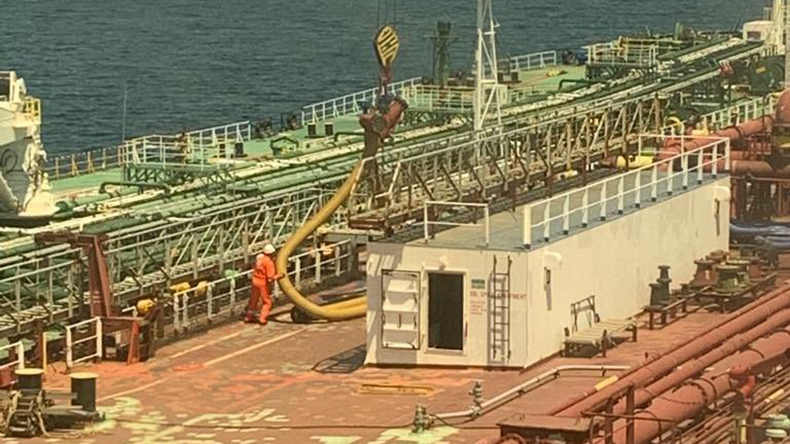 TWO laden Greek suezmax tankers that have been held in Iran for three months could be released as early as this week, Lloyd’s List understands.

An Iran-flagged aframax tanker at the centre of the incident, the 2003-built Lana (IMO: 9256860), remained at anchorage just outside the Greek port of Piraeus on August 16 after reloading about 56,000 tonnes of Iranian oil that had earlier been subjected to seizure by the US government.

The ship-to-ship transfer was completed on August 14 and appears to have been completed without incident. The tanker that discharged the cargo, the panamax Ice Energy (IMO: 9301732), had departed Greece and its Automatic Identification System signal indicates that it is headed for Gibraltar.

The tanker had to pay the STS contractor, Lloyd’s List has been told, and is also awaiting bunkers to be delivered later this week.

Greek diplomatic sources said an understanding has been forged with Iran that the pair of Greek tankers — Delta Tankers’ Delta Poseidon (IMO: 9468671) and Polembros Shipping’s Prudent Warrior (IMO: 9753545) — will be released as Lana departs.

Vessel was sanctioned by the US in February for ties to a state-owned Russian bank, not for carrying Iranian crude

“There is a deal, but I can’t give you details,” said one senior official. “It has been dealt with directly by the prime minister’s office.”

One of the two companies that saw their tankers snatched in the Middle East Gulf back in May also said that optimism had increased during the last week.

“I hope we are almost at the end,” said Polembros managing director George Vakirtzis. “It has dragged on too long. One thing I can tell you is that Lana will not be allowed to leave Greece without our vessels leaving Bandar Abbas.”

The two vessels were visited by officials sent by the Greek shipping ministry last week and, according to one source, some preparations have been made for possible departure.

A total of 49 seafarers have been kept on board the two tankers and watched by armed guards since they were diverted from international shipping lanes in the Middle East Gulf on May.

The Iranian embassy in Athens said in a tweet at the weekend that the STS operation to return the half of Lana’s cargo that had been removed was then underway and the tanker would “soon” depart for Iran.

The vessel was initially arrested after straying into Greek waters in April when numerous deficiencies were identified by inspectors, but it is understood that mechanical repairs have been completed and the vessel is fit to sail.

Sergey Volkov, head of the Russian Maritime Register’s office in Greece said he had “no information” on the tanker’s condition or even if it remains under Russian class.

He referred questions to the society’s St. Petersburg head office, which did not immediately reply to an email.

One source that has been closely following the saga said that the ship was unlikely to be detained longer for minor reasons.

“I think everyone here is anxious to get rid of Lana as soon as fast as possible,” he said. “As long as the two Greek tankers are released first.”