Containerisation and Thatcherism seemingly rendered dockworker walkouts a thing of past. Nobody is asking for a comeback tour

From the dockers’ tanner strike of 1889 to the Pentonville Five dispute of 1972, stoppages on the waterfront have literally changed the course of British history. Let them stay in the history books 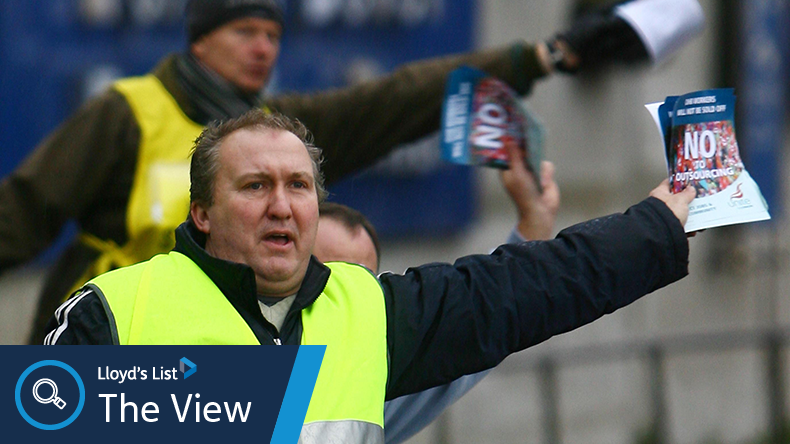 FROM the landmark dockers’ tanner strike of 1889 to the Pentonville Five dispute of 1972, stoppages on the waterfront have literally changed the course of British history.

For decades, walkouts by what were then unskilled but strongly unionised workers had the power to put the skids under the best-laid plans of governments of all persuasions.

Many of their leaders, from Tom Mann, Ben Tillett and Ernest Bevin to Jack Dash and Vic Turner, became figures of national standing, hailed as icons by various strands of the labour movement.

Dockworker militancy was not the sole reason why Harold Wilson had to devalue sterling and Ted Heath U-turned on the Industrial Relations Act. But in both instances, it was part of the mix.

Then came two developments that seemed to relegate such scenarios to the past: containerisation and Thatcherism.

The very nature of the job changed almost overnight. Much of what once was soul-destroying and back-breaking sweated manual labour has been largely automated.

Most of the role that remains for human beings constitutes skilled work, entailing use of extremely expensive equipment to move boxes from ship to shore, shore to ship, or between stacks on the hardstanding.

Meanwhile, the administration of Margaret Thatcher scrapped the National Dock Labour Scheme, introduced by Clement Attlee in 1947 in response to the dock strike of 1945.

The NDLS was justified in its day, ending the humiliation of men having to queue up each morning and hope to catch the foreman’s eye simply to procure a day of badly remunerated casual work.

But with dockers long on contracts of employment broadly similar to blue-collar counterparts, it was by 1989 an obvious anachronism.

The year-long rearguard action in 1989-90 to prevent its abolition marked what will likely prove the last-ever ostensibly national dock strike.

The qualifying adjective is necessary, because many newer ports, which were outside what was known in industry jargon as just “the scheme”, kept working.

So quiescent had industrial relations in British ports become that we are now 24 years away from even the last significant local strike, which took place in Liverpool.

Brace yourselves, Generation Z. It looks like you are about to see something you have until now only read about, in the form of a genuine strike wave.

Pay talks at Felixstowe, in decades past a bastion of trade union moderation, have broken down, and the expectation is for a series of eight one-day strikes starting later this month.

Employers say union is failing to put the improved offer to its members. Unite says strike action will go ahead unless a new proposal is tabled

Representatives of 1,900 hourly-paid workers have said no to a 7% pay rise and a £500 lump sum. With UK inflation at 9.4% and expected to go double digit shortly, even what would have seemed a generous offer in the past represents a real-terms pay cut.

At Liverpool, Mersey Docks and Harbour Company dockers have also rejected 7% and a £30-a-week night shift allowance, and are currently being balloted on their readiness to strike.

Liverpool dock workers to be balloted on strike action

Interestingly, local media reports that dockers at port of Bristol have settled on 8% and a lump sum worth 1.1% of current salary, which may show that offers from managements elsewhere may not have to go that much higher to cut a deal.

None of this is happening in isolation, of course. Public patience at stagnation in real wages since the global financial crisis, at a time when energy bills alone could top £5,000 next year, has definitively snapped.

Members of RMT — which organises rail workers as well as seafarers — have launched a series of pay strikes, as have junior barristers, led by the Criminal Bar Association. Train drivers in Aslef and postal workers in CWU are set to strike later this summer.

There have even been spontaneous sit-ins by non-union Amazon warehouse employees, probably illegal under British employment legislation, which is far less permissive of such things than many other countries.

Dock unions clearly still wield considerable clout on a local level. But the world has changed since 1967, when Wilson was forced to call in the troops to break that year’s dock strike, to ensure continued imports of basic goods and to minimise devastation to the balance of payments.

One-day strikes at individual ports will exacerbate existing congestion and the bottlenecks that are already endemic thanks to the pandemic, but no longer pack the paralysing punch of yore.

Many calls can potentially divert to London Gateway or Southampton, or even the north continent range, although those ports have congestion headaches of their own to conjure with right now.

Indeed, German ports are being hit by industrial action themselves, again in support of a pay claim.

Over on the US west coast, members of the International Longshore and Warehouse Union — that paradigm exemplar of using industrial muscle to secure middle-management pay scales for humble proletarians — continue to work despite the expiration of their contract, and despite opposition to automation proposals from the Pacific Maritime Association.

Automation again at the centre of US labour negotiations

Unions are adamant that automating shoreside operations at terminals will lead to fewer jobs for their members. But terminal operators say it is necessary to expand capacity

Strikes cost workers’ pay, hit port company profit and loss accounts, result in inconvenience to shipowners, and ensure goods take longer to reach consumers. In short, there are no winners.

Lloyd’s List is a non-partisan in the current clashes. Dockers need to pay rent, put food on the table and meet energy bills as much as anybody else, and reasonably minded employers will recognise that.

Thankfully, neither side seems to be acting in a bloody-minded manner, and may not even be that far apart. All we can do is urge both sides to sit down around the table and come to terms.

Liverpool dock workers to be balloted on strike action