Vessel was sanctioned by the US in February for ties to a state-owned Russian bank, not for carrying Iranian crude 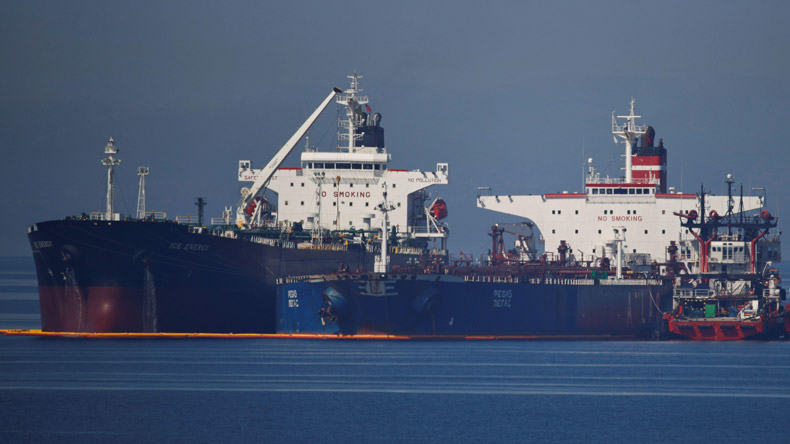 Source: REUTERS / Alamy Stock Photo Ice Energy transferring crude from Lana off the Greek island of Evia in May.

AN IRAN-flagged aframax has started reloading oil confiscated by the US earlier this year after Greek authorities approved the release of the cargo, the contractor hired to carry out the transfer said.

Environmental Protection Engineering confirmed the ship-to-ship operation began off the Greek port of Piraeus on August 11.

The company said that it would likely take about two days to transfer the 56,000 tonnes of crude that was pumped out of Lana about two and a half months ago in the early stages of an international spat that has also seen two Greek tankers effectively taken hostage in the Middle East Gulf.

Data from US lobby group United Against Nuclear Iran (UANI) showed the vessels within 11 metres of each other on August 11.

UANI also obtained a warning issued by the Greek Ministry of Shipping on August 10 banning anchorage or movement of vessels within a radius of 0.1 nautical miles from Lana and Ice Energy as the STS takes place. It warned that violators would be punished.

The sanctioned oil was seized by US authorities in May off the Greek island of Evia, but ordered to be returned by Greek courts after months of diplomatic wrangling.

Lana and its owner, Russia-based TransMorFlot LLC, were both sanctioned by the US in February and May, respectively, as part of US sanctions against Russia.

The vessel had been carrying Iranian crude since August 2021, according to UANI. It was named Pegas until February 2022, Lloyd’s List Intelligence data shows.

The vessel was expected in Türkiye’s Marmara terminal in January, but unintentionally ended up in Greek waters, according to Lloyd’s List Intelligence data.

An engine failure and inclement weather forced it to anchor at the Greek port of Karistos, where it was detained on April 15 because of its Russian ownership. However, a change in its ownership led to the withdrawal of its seizure notice as the new owner was not on the European Union’s sanctions list.

US authorities then moved to seize its cargo. The US Department of Justice chartered Dynacom-owned Ice Energy and Ice Victory (IMO: 9301744) to bring the Iranian oil to the US. On May 23, Ice Energy loaded half of Lana’s cargo in the first of the two planned STS operations.

On June 3, port state control inspectors in Piraeus detained Ice Energy for alleged issues with the vessel’s  ISM certification, preventing it from sailing to the US.

In July, Greece’s Supreme Court ultimately ruled that the oil would be returned to the Iranian vessel.

“Since Lana and its oil are sanctioned, Greece had an opportunity to side with the rule of law and help enforce US sanctions but unfortunately did not rise up to the occasion,'' said Claire Jungman, UANI’s chief of staff.

It was not immediately clear what will happen once the missing half of Lana’s cargo is returned to the tanker.

The move is widely seen as a key step towards securing the release of the two laden Greek suezmaxes and their crews being held off Bandar Abbas in Iran.