Decisions on the next departure will be made after the first bulker safely exits the route, but explosions outside of Danube river entrance highlight journey risks

Vessels that have been stranded in Ukraine since the beginning of the conflict are getting ready to move along the grain corridor, with journeys expected to western Europe, Asia and the Middle East 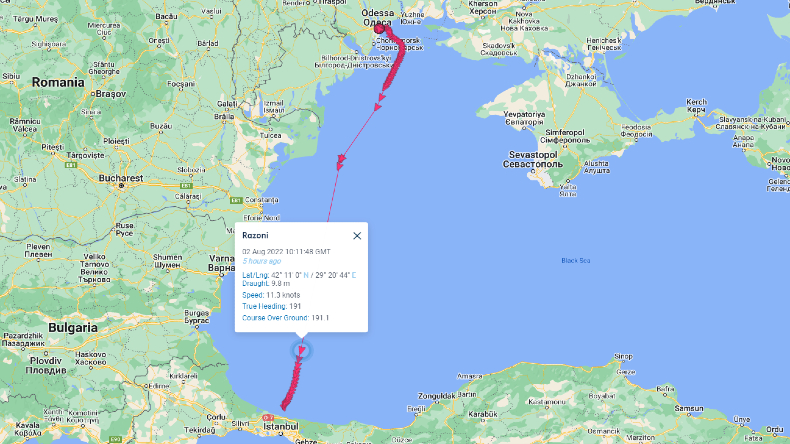 Source: Lloyd’s List Intelligence / Seasearcher Bulk carrier Razoni (IMO: 9086526) was the first vessel to travel along the grain corridor. There are 16 ships laden with grains at the ports of Odesa and Chornomorsk, 10 of which are ready to depart.

THERE are 16 ships laden with grain at the ports of Odesa and Chornomorsk, 10 of which are ready to travel the grain corridor, according to an Odesa-based Lloyd’s agent.

Bulk carrier Razoni (IMO: 9086526) became the first vessel to depart one of Ukraine’s newly established export hubs after many weeks of negotiations.

The decision on further grain departures will be taken after Razoni passes through the corridor, according to Lloyd’s agent Eurogal.

There are 24 bulk carriers and general cargoships alongside the ports of Odesa, Chornomorsk and Yuzhnyi, according to vessel tracking data from Lloyd’s List Intelligence.

Thoe and Propus are at the port of Chornomorsk, Sea Luck and Puma in Odesa, and Sacura in Yuzhnyi.

Three vessels in the port of Chornomorsk have begun signalling international destinations. General cargoship with container capacity Meroving (IMO: 9453614) is indicating an arrival to Ravenna, Italy on October 17.

Malta-flagged bulker Rojen (IMO: 9754927) is due in Teesport, UK on August 14, while Singapore is expecting bulk carrier Ocean Lion (IMO: 9296248) on August 29, according to destination data inputted by masters.

Navi Star (IMO: 9590979) is expected to travel to Spain loaded with corn. Bulk carriers Star Laura (IMO: 9328936) and Glory (IMO: 9288473) are anticipated to transport corn to Iran, according to Yörük Işık, a geopolitical analyst from the Istanbul-based consultancy Bosphorus Observer.

Polarnet (IMO: 9758961), a Türkiye-flagged general cargoship, was the first vessel to be loaded with grain at Chornomorsk since the war began. Loading began on July 29.

There is about 20m tonnes of grain from last year’s crop at the ports’ silos, worth about $10bn. Approximately 65m tonnes of crop from this year’s harvest is scheduled for export, and Ukraine is expecting $1bn per month in income from the reopening of the ports, says Eurogal.

Those lifting grain face a challenging logistics operation, with tugs needed to navigate the mined waters.

In the past week two vessels have hit explosive objects in the area around the River Danube’s Bystre entrance.

The Bystre Danube-Black Sea waterway is another way for vessels to travel to reach Ukraine’s Danube ports, which have become important hubs for trade in the wake of the war.

The use of the Bystre mouth only became possible at the beginning of July when Ukrainian forces recaptured Snake Island.

Two ships, a hydrographic vessel and pilot boat, sustained holes in two separate incidents after colliding with an explosive device.

The crew on the pilot ship Orlik claim they did not hit a mine, but another explosive object.

There were no injuries reported in either accident.

The passage by the mouth of Bystre has been temporarily restricted, according to the Ukrainian Sea Ports Authority.

Lloyd’s insurer Ascot is ready to write cargo and war risk cover for up to $50m per vessel for agricultural exports using the Black Sea corridor, with Marsh brokering the polices, according to Eurogal.