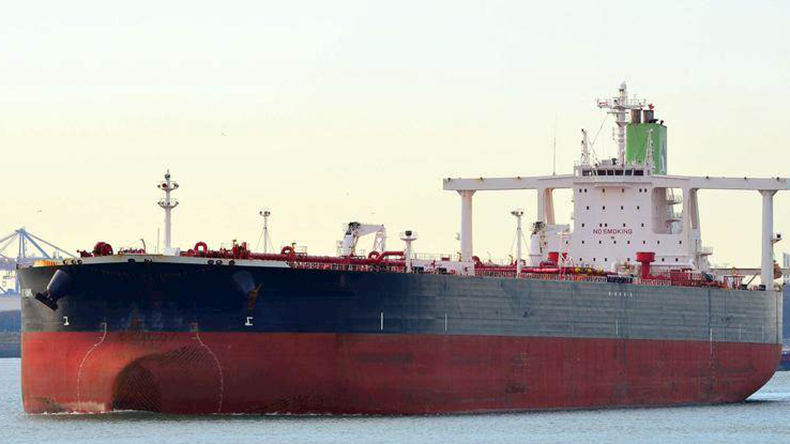 Source: Lloyd’s List Intelligence / Seasearcher Catalina 7 is drifting in a mid-Atlantic area as it transfers cargoes from tankers that loaded at Russian ports.

AT LEAST five Chinese-owned elderly VLCCs, all bought by the same anonymous beneficial owner in the past three months, are at the centre of a newly established ship-to-ship transfer hub for Russian crude that has evolved in the middle of the Atlantic Ocean.

Questions have been raised regarding the safety and scant regulatory and technical oversight of the high seas logistics network used to consolidate Russia-origin crude cargoes on tankers that sail for China.

Since the beginning of June, Lloyd’s List has tracked at least a dozen tankers involved in transferring or receiving Russian oil, previously loaded at Baltic and sometimes Black Sea ports, around 860 nautical miles west of Portugal’s coast.

These VLCCs and suezmaxes are then tracked sailing for destinations including China, although possible STS transfers may be likely in waters off Singapore or Malaysia.

Gazprom and Lukoil have chartered most of the tankers that loaded at Russian ports, including Primorsk and Ust-Luga, analysis of fixture data shows.

As many as 12 further tankers may also have taken part in these STS operations during the past six weeks but have switched off their Automatic Identification System signal to avoid detection.

There is no suggestion that any sanctions have been breached.

“These are commercial games,” said Alex Glykas from Dynamarine, a company that advises shipowners worldwide on more than 4,000 STS transfers on some 1,300 vessels annually.

“The way that the industry has been structured, it assists opportunities because there is no proper surveillance, it’s as simple as that.

“Shipowners who want to take big risks, they make big money, and there are traders that support them.”

Ship-to-ship transfer in open waters is a “high-risk process” and these operations in mid-Atlantic locations have never been seen before, according to Mr Glykas.

He said there is a global network of accredited STS providers and none operate in that area as “it doesn’t make any sense”.

The tankers involved would need to have their own trained personnel on board to supervise because no STS service providers were involved nor proper assessments given, with a greater likelihood of injury to crew during moorings because of the open location.

“You have to have people to do the mooring operations, but when you are in open seas, this is a danger because of the motion of ships,” he said.

“You have to take into consideration that weather conditions need to be absolutely ideal for the operation, which is something not frequently found in the mid-Atlantic.”

Ships could be damaged during the operation, and hoses ruptured, leading to minor oil spills, he added.

At the core of the STS mid-Atlantic operations is an unknown Dalian-based entity that provided the same address but different company names for five VLCCs bought in April and May.

The address at “Fuli Center, 6, Gangxing Lu, Zhongshan Qu, Dalian, Liaoning” in China is used for all of the VLCCs, shipping databases show.

The tankers immediately sailed for the mid-Atlantic where they are now drifting in the area as they transfer cargoes from tankers that loaded at Russian ports.

Monica S is sailing around the Cape of Good Hope after mid-Atlantic STS transfers that could not be identified as the recipient tanker or tankers did not have AIS on.

Crystal Rose is currently in mid-Atlantic, southwest of Portugal.

Some of the other VLCC, suezmaz and aframax tankers that engaged in STS transfers were previously involved in US-sanctioned Venezuelan or Iranian trades.

The Palau-flagged aframax tanker Zhen I (IMO: 9255880), was sold in May to a registered owner listed as Istanbul-based Centrum Maritime, with Monumont Ship Management, a Marshall Islands-based shell company, providing commercial management.

The tanker has twice shuttled between the Russian Baltic port of Primorsk and mid-Atlantic, before taking a third cargo directly to Asia from Primorsk. Zhen I is now sailing in the Mediterranean signalling the Suez Canal as its next destination.

Monumont Ship Management also manages three other Palau-flagged tankers, all bought in the past 18 months, with trading patterns and AIS signals that suggest they are deployed in sanctioned trading.

The tanker arm of China’s government-owned shipping company Cosco first developed the practice of using STS for cargo transfers of crude back in early 2019, in response to US sanctions on Iran’s shipping and oil sectors.

The company used some eight most elderly tankers at a logistics hub set up in waters off Malaysia, with tankers shuttling backwards and forwards from Iran to Singapore and Singapore to China.

Russia’s commercial departures creep up as war drags on

Outbound sailings of bulk carriers and general cargo ships from Russia are approaching the levels seen before the situation in Ukraine unfolded, but containership activity is failing to recover

This logistics pattern has since been refined and combined with a series of deceptive shipping practices to further obfuscate the origin and destination of the cargo, as well as the ownership and identify of any vessels involved.

A fleet of some 200-plus elderly tankers is now directly involved in shipping some 1.2m barrels per day of Venezuelan and Iranian crude — about 3%-4% of seaborne trade — with China the predominant buyer.

The STS transfers also allow traders to blend with other crude types or claim a bill of lading that falsely declares the crude on board is “Malaysian blend”, for example.

Ship-to-ship transfers are now regularly used for Russia-origin crude, as sanctions and self-sanctioning recalibrate oil trades and divert oil to Asia from Europe.

The mid-Atlantic STS locations established by Chinese interests however is a market first, given the acknowledged industry challenges of undertaking such transfers in open seas.