‘Why should I pay them? They treat this ship like a hotel,’ argues unrepentant shipowner in the case of the 28-year-old general cargo ship Sai Arambh, stuck in Sri Lanka for 32 months with crew unpaid living in squalor and surviving on handouts from seafarer charities

Crew abandonment cases increased by 138% last year; industry officials are warning that 2022 is on track to exceed the record 95 cases recorded globally in 2021 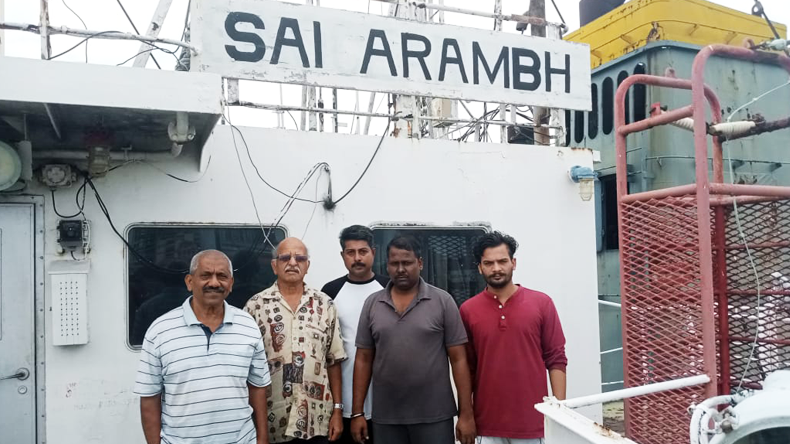 Source: Human Rights at Sea Capt Mushtaq Ahmed Kapade (left) and four of the six remaining crew on board the Sai Arambh.

CAPT Mushtaq Ahmed Kapade has been on board the 28-year-old general cargoship Sai Arambh (IMO: 9115456) in the port of Colombo since October 2019.

He has been unpaid, unable to access regular fresh food and potable water and unable to leave.

Along with the five remaining crew stuck on board, Capt Kapde is waiting for a legal ruling from the Sri Lankan High Court that could force a public auction of the vessel and an end to his 32-month wait for justice.

But with Sri Lanka’s economy in freefall amid a political and economic crisis, the courts are effectively on hold and the crew of the vessel Sai Arambh are in limbo.

Along with more than 3,500 other seafarers globally, they have been cast adrift, unable to return home and the prospects of their ordeal ending soon are slim. Some of the 247 vessels that remain abandoned at multiple locations around the world have had their cases open with national and international authorities for more than a decade.

Cases such as that of the vessel Sai Arambh are increasing, rapidly.

Crew abandonment cases increased by 138% last year. Industry officials are already warning that 2022 is on track to exceed the record 95 cases recorded globally in 2021.

However, under-reporting is still known to be an issue and the true figure is likely to be much higher.

A total of 787 seafarers have been reported as abandoned to the ITF so far this year, with 49 open cases recorded in their database. Like Capt Kapde and his crew, many of them are Indian.

In a repeat of last year’s statistics Panama already stands out as the flag with the highest number of abandonments, racking up a total of 16 cases so far this year. The flag recorded 29 last year.

In terms of location, the United Arab Emirates is the most common place to abandon a vessel, with 11 cases recorded since January, affecting 157 seafarers.

“Should the extrapolated trend for recorded abandonment continue to increase at the current rate we are going to witness more misery and hardship inflicted upon unsuspecting crew and their families set against the context of billions in profit being made in-sector,” said David Hammond, chief executive of the non-governmental organisation Human Rights at Sea.

“The gross inequality is simply unacceptable in a multi-trillion dollar industry. If the recorded incidents to date are any measure of scale, what about the true number, including those yet unrecorded cases?” Mr Hammond continued.

Cases of abandonment increased sharply in the wake of the pandemic, but the numbers have continued to rise this year again.

According to Natalie Shaw, director employment affairs at the International Chamber of Shipping, the increasing number of cases reflects the fate of companies which had been operating with little money to spare for cases of emergencies.

The case of the vessel Sai Arambh is a worryingly familiar tale for those lawyers and industry associations trying to seek resolutions for the seafarers caught up amid the growing number of economic casualties.

Capt Kapde joined the vessel in September 2018, but by October 2019 engine problems forced the ageing ship into Colombo for repairs.

While the co-owners, Capt Prafula Ranjan and Capt Dhanu operating under the company name SPS Marine Ocean Continental Shipping, invested approximately $300,000 into the repairs, the crew were unpaid.

Capt Ranjan told Lloyd’s List that the repairs had depleted all his financial reserves, leaving him unable to pay the crew. He had ordered the crew to sail the vessel, assuring them that they would get paid once the voyage had been complete, but the crew refused and eventually arrested the vessel.

That was followed by a string of legal challenges and disputed accusations on both sides detailed in extensive legal documentation, seen by Lloyd’s List, but yet to be ruled on by the Sri Lankan High Court.

Of the original 19 crew, only six including Capt Kapde remain on board, holding out for pay and a route home. The intervening 32 months have left the vessel in a state of disrepair.

On March 29, one crew member was descending the badly corroded gangway ladder to go onshore, but he slipped, fell into the harbour and died.

The vessel’s co-owner Capt Ranjan denies the accusation that he has abandoned the vessel or the crew. He blames the crew and Capt Kapde for refusing to sail and justifies the non-payment of wages by explaining that he has lost his savings and his house as a result of the legal disputes.

While he admits non-payment of wages for the original voyage, the 32 months that the crew have been on board is a matter for them and the courts, he said.

“Why should I pay them? They have not been working and I have been telling them to leave. They should not be on board that ship — they treat it like their own hotel,” Capt Ranjan told Lloyd’s List from India, where he awaits the final ruling of the Sri Lankan High Court.

There will be a joint ILO/IMO meeting towards the end of this year to examine what else can be done to stem the increasing number of abandonment cases like the Sai Arambh.