Incidents of dark activity in the Black Sea are increasing as Kyiv tries to probe what it alleges is the theft of grain from Russian-occupied territory. A muted response from Turkey could further derail high-level political talks to open a safe sea lane 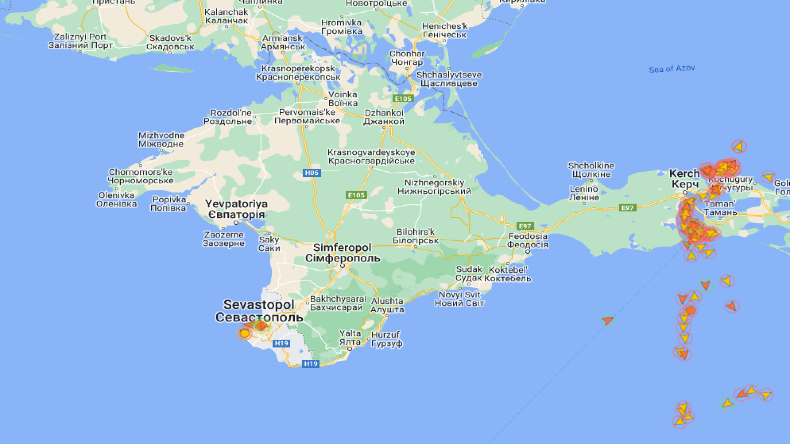 Source: Lloyd's List Intelligence / Seasearcher There are only a few bulk carriers and general cargo ships with their AIS on around Crimea, but far more seen passing through the Kerch Strait.

THE volume of ‘dark’ port calls by vessels with Automatic Identification System signals turned off has been increasing in Crimea since Russia began its incursion into Ukraine in February.

There were 73 instances of AIS gaps for bulk carriers and general cargoships in which vessels were deemed likely to have called at a port in Crimea in May, according to Lloyd’s List Intelligence analysis. This was up from 63 in April and 47 in March.

The growing number of dark port calls in the region comes amid accusations from Ukrainian officials that Russia has been stealing grain from occupied territories and transporting the goods to Crimea for shipment to foreign countries.

Dark activity around Crimean ports is not uncommon.

Vessel-tracking data from Lloyd's List Intelligence shows 47 instances in which a dark port call could have occurred in January, and 29 in February.

During the first few months of the year, it was most common for vessels to turn their AIS off and on while within Ukraine’s exclusive economic zone.

The recent growth is almost entirely being driven by vessels going dark while in Russian waters.

Crimea was annexed by Russia in 2014 and these ports have long been operated by the Russians.

Departures of general cargoships are unusual, but it does happen.

Over 1,100 departures from Crimea were recorded during the first half of this year. A vast majority of the tracked journeys are for non-merchant vessels such as tugs, support ships and yachts.

Just 2% of outbound sailings were attributed to general cargoships. No bulk carrier departures were recorded.

Investigations show Russia moving Ukrainian commodities to Crimea where they are loaded onto vessels. Tracking data shows ships suspected of taking part in the trade are going dark to obfuscate their true origins and destinations

Ukraine has this week asked Turkey to help investigate three separate Russia-flagged ships as part of Kyiv’s efforts to probe what it suspects is the trade of stolen grain from occupied territory.

Ukrainian officials also requested the investigation of general cargoship Zhibek Zholy (IMO: 9598880), which was accused of shipping stolen Ukrainian grain from the Russian-occupied port of Berdyansk.

The Russia-flagged ship was reportedly detained at Karasu. Vessel-tracking data confirms it was anchored outside the port for about six days.

Russia’s foreign ministry denied claims that the vessel was detained on suspicion of carrying stolen grain, saying that the ship was “undergoing standard procedures”.

Zhibek Zholy departed on July 6 and it has not reported an AIS position since.

Kyiv has summoned the Turkish ambassador in response.

“We regret that Russia’s ship Zhibek Zholy, which was full of stolen Ukrainian grain, was allowed to leave Karasu port despite criminal evidence presented to the Turkish authorities,” said Oleg Nikolenko, a spokesperson for Ukraine’s ministry of foreign affairs.

Ankara’s decision to allow the vessel’s departure has the potential to derail already fragile talks to establish a safe corridor in the Black Sea that would restart Ukrainian grain exports.

Turkey is widely seen as being a key state in agreeing any security arrangements for the proposed safe shipping lane.

About 20 Turkish vessels are prepared to transport grain from Ukraine once, and if, a corridor is arranged, according to Odessa-based Lloyd’s agent Eurogal.

Ankara’s decision to allow Zhibek Zholy to leave could weaken Turkey’s credibility and position at the negotiating table.