Hopes raised for release of Greek suezmaxes held by Iranian forces, but legal tug of war over Lana’s cargo may have a way to go 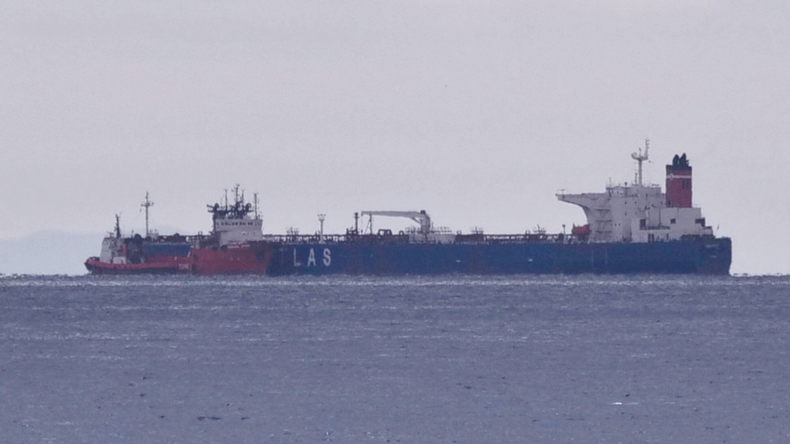 Source: Reuters / Alamy Stock Photo The aframax Lana, formerly Pegas, seen anchored off the shore of Karystos, on the Greek island of Evia, on April 19.

THE Iran-flagged aframax tanker at the centre of a political row involving the abduction of two Greek tankers in the Middle East Gulf has been towed to a new position outside the port of Piraeus.

The move over the weekend puts the 115,400 dwt Lana (IMO: 9256860), which had been anchored off Karystos on the Greek island of Evia since April, in position for a potential ship-to-ship transfer operation to restore about 68,000 tonnes of its cargo that was seized pursuant to a US request in May.

The vessel is now behind the Dynacom Tankers-managed panamax Ice Energy (IMO: 9301732), which was hired to transport the first tranche of  Lana’s cargo to New York.

That voyage and a second planned STS operation to remove Lana’s remaining cargo were halted after Iranian forces diverted the Greece-flagged suezmaxes Delta Poseidon (IMO: 9468671) and Prudent Warrior (IMO: 9753545) from international traffic lanes to Iranian waters off Bandar Abbas, where they remain with a total of 49 seafarers on board.

A Greek appeal court has since overturned the original seizure order after an appeal by the Iranians.

A lawyer representing Iranian interests is expected this week to submit this latest order to the Piraeus harbour master and request permission for a new STS operation to transfer the oil back to Lana.

Meanwhile, an Iranian tanker that has been anchored alongside Prudent Warrior since mid-June also appears to have been moved.

One source closely following the situation said that, following Lana’s move to Piraeus, the suezmax Rima (IMO: 9150377) had left the side of the Polembros Shipping-managed tanker off Bandar Abbas.

The presence of Rima in a position to undertake an STS operation had been seen as a warning that Iran’s Islamic Revolutionary Guard Corps might be prepared to snatch part or all of the oil on board Prudent Warrior if the Lana cargo is not returned.

The source said that if, as seemed likely, the move was a response to the step taken towards returning the cargo to the Lana, it raised hopes that the Delta Tankers and Polembros suezmaxes would be freed after Lana and its cargo are in Iranian hands.

However, the tug-of-war over the cargo may have some way to go yet as the Greek appeal court ruling is itself being challenged by the intermediary that had chartered the Dynacom tankers to transport the oil to the US following the initial confiscation order.

A hearing by Greece’s supreme court has been scheduled for July 19.

In a carefully worded statement issued at the weekend, Polembros acknowledged that the latest moves were steps towards a positive resolution of the standoff. But the company’s words reflected continuing anxiety for its crew.

“We hope that the recent developments are the pathway to the release of our vessel and her crew,” it stated. “We are constantly in communication with the seafarers’ families in an attempt to support them through these terribly troubling times.”

The seafarers on board Prudent Warrior remain in good health and are being “treated well”, the company said.