Shipping has routinely sought invisibility, hiding behind brass plates, offshore structures and opaque operations. But the twin tectonic shifts of decarbonisation and digitalisation require transparency and collaboration with the wider supply chain, charterers and society at large. Now is not the time to be closing doors

There are difficult conversations to be had in shipping, but having them behind closed doors in order to avoid scrutiny is a retrograde step. It is also at odds with the demands of wider society and their customers 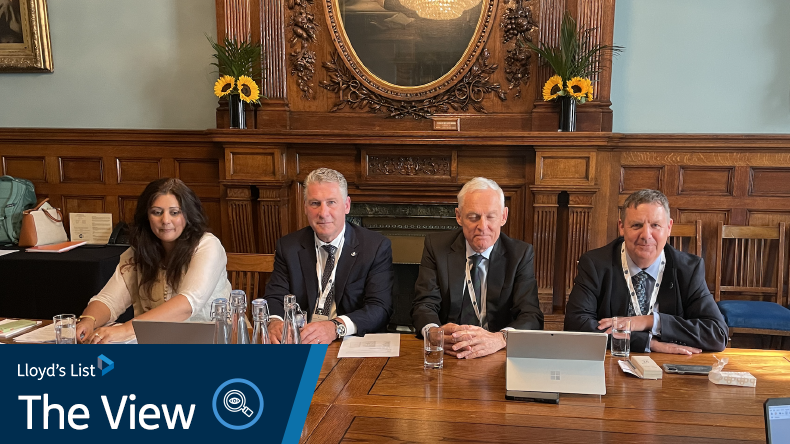 A photo of an off-the-record media briefing about the Shaping the Future of Shipping Summit, which Lloyd’s List was not allowed to attend. From left: Nusrat Ghani MP, Mark Cameron of Ardmore Shipping, Esben Poulsson of the International Chamber of Shipping and Guy Platten, ICS.

TEMPTING though it sometimes seems to dismiss the notion of openness and transparency in business as a slightly faddish counsel of perfection, the pay-offs for acting on these watchwords are often concrete.

Letting people know what is happening is the best way of building trust, enhancing positive public perception, ensuring staff commitment and preventing the spread of detrimental rumours, to name just a few of the gains.

Yet shipping is a traditionally secretive industry, dominated by privately-owned companies that still largely prefer to keep their cards close to their chests.

But better should be expected from representative bodies, by their very nature, and some of them have of late been falling down in this regard.

Why shipping is about to get bigger, less opaque and more expensive

The twin tectonic shifts of digitalisation and decarbonisation will require the next generation of shipping leaders to rewrite the rulebook and redesign many aspects of global maritime supply chain. According to several of today’s leading industry executives, the gravitational pull towards scale and transparency is now an inevitable shift that will define the future of the industry

Let’s start with the International Chamber of Shipping, which banned the media from covering its London-based decarbonisation summit on Monday. The reason: Media attendance prevents open and frank debates about sensitive topics.

Compounding this policy, journalists from around the world, assembled for a briefing immediately after the event, were told just one hour before the event began that it was off the record.

That utterly defeats the very purpose of the proceedings, placed the media in the farcical and time-wasting situation of not being able to report anything said in the briefing about a conference that they could not attend.

Three days later, there is no sign of a promised ‘on-record’ statement from the grandly titled Shaping the Future of Shipping Summit. Although we understand such insights are on the way, outside of the 200 attendees, nobody is the wiser of what, if anything, was really accomplished.

Nor is the International Chamber of Shipping alone.

Proceedings at meetings held by the International Maritime Organization have been twice interrupted this year while delegates from Russia, Saudi Arabia and China, complained about Lloyd’s List reporting their views on decarbonisation.

These countries, incidentally, are ranked 155, 166 and 175 of the 180 states listed on the most recent edition of the World Press Freedom Index.

Complaints were made directly to the chair of the Marine Environment Protection Committee and the IMO secretary-general. This, in the context of a United Nations agency based in London, is obviously unconscionable.

Lloyd’s List was compliant with the terms and conditions of its IMO media accreditation. Its revelations about the debates were well received by its readership and many within the IMO structure who welcome the accountability such reporting brings.

Liquefied natural gas lobby group SEA-LNG tried a similar tactic back in May, when a roundtable discussion about the future-fuels pathway ended with a media boycott, after a last-minute note from organisers placing the event under Chatham House rules.

US president claims to be ‘viscerally angry’ about the container linesthat he blames for inflation, soaring freight rates, supply chain congestion and much in between. The political theatre of the Ocean Shipping Reform Act was on show in the US this week, but to help explain what it really means for shipping this week’s Lloyd’s List Podcast features two people...

Again, the excuse was that this format provided for “a broad and open discussion”. But if the arranged speakers will not put their name to their claims, the salience of the event is greatly diminished.

We know from talking to journalists who work on trade media covering other industries that many companies positively crave publicity, and go out of their way to keep the press informed of their deliberations. We also know from long experience that shipping is not like that, and is not going to change overnight.

But in an era of rising concern about terrorism and ever more stringent sanctions, the era of sheltering behind single-ship companies registered to accommodation address in Broad Street, Monrovia, is in any case drawing to a close.

Increasingly, governments, charterers, the wider supply chain, and society at large insists on knowing with whom they are dealing.

Many container lines took umbrage (and rightly so) at how US President Joe Biden scored political points by mischaracterising their role in logistics logjams in the US that they were not responsible for.

But shipping cannot have it both ways. If you want the message to get out there, you have to start with getting it out there to begin with.

IMO’s Lim calls for ‘increased levels of ambition’ on decarbonisation

Carbon price and clean fuel standards on agenda at IMO