Animal harm: What to do about livestock carriers

Around 2bn live animals are carried by sea each year, and animal rights activists are demanding the trade be banned altogether. If it is to continue, the industry must revolutionise current woeful safety standards 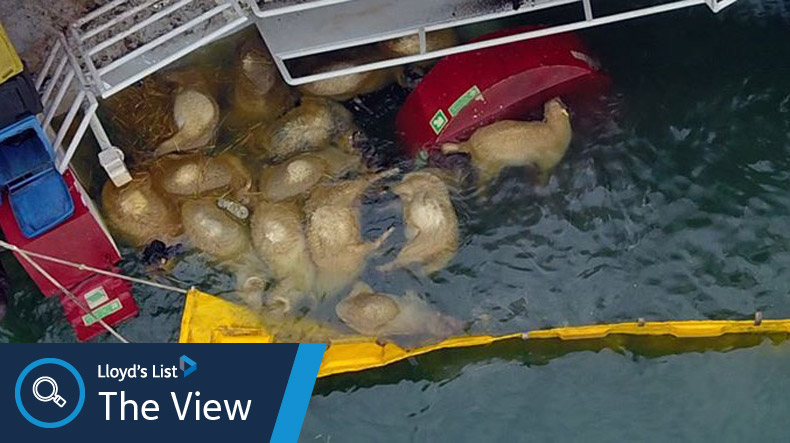 WHETHER or not animals have rights — and if so, what those rights should be — is a staple topic in philosophy seminar rooms in universities everywhere.

Perhaps you are a ‘speciesist’, to use a term coined by prominent Australian thinker Peter Singer to describe those who believe animals are, from a moral standpoint, inferior to human beings.

In his influential 1975 book Animal Liberation, he argued that animals are sentient and experience suffering, and therefore the basic utilitarian principle of the greatest good to the greatest number should be extended to take in their welfare.

Or perhaps you prefer the pithier contention of 1980s Mancunian indie rock kings The Smiths that Meat is Murder, and that fried flesh is not succulent, tasty or kind.

That stance has always been popular among the young, and vegetarianism and veganism are winning massive numbers of youthful new adherents, on account of the contribution of bovine and ovine flatulence to global warming.

Supply your own answers, of course. But these are important debates, and excite passions to the point where people are ready to go on demonstrations, or even driven to plant bombs in the name of animal liberation.

Shipping intersects with these issues through the role of livestock carriers, a less-visited niche of the industry that generally commands little attention until bad things happen.

There have been seven total losses of livestock carriers in the last 10 years, ending the lives of 170 seafarers and 50,000 beasts. Let us enumerate just some of the casualties that make up that shameful tally.

Al Badri 1 (IMO: 7349651) was built in the hey-day of flares and platform boots almost half a century ago, originally to carry cars across the North Sea between Hamburg and the UK. It was purchased by a single-ship company based in Dubai only last year.

It was registered in Tanzania, whose flag was recently elevated to the Paris MOU’s grey list after 12 years on the blacklist. It was classed outside the International Association of Classification Societies.

Earlier this month, it overturned in a Sudanese port, killing over 14,000 sheep that were bound for Saudi Arabia.

Gulf Livestock 1 went down off the Japanese coast in September 2020 while sailing from New Zealand to China, with the loss of 41 seafarers and 6,000 cattle. Queen Hind capsized en route from Romania to Saudi Arabia in November  2019, drowning 14,000 sheep.

‘We know how much it would mean to the families of those on the ship to understand more about what happened to cause this tragic loss of life,’ said New Zealand minister Winston Peters

We could go on, but the point is surely made. These are recurring incidents, and the vessel type has a notably poor safety record, suggesting more is at work than the mere blind fate.

Animal rights activists want the trade in live animals banned altogether. While that is an extreme demand, shipping does need to ask itself some questions, such as whether animals need to be carried by sea at all.

Livestock can be humanely slaughtered in country of origin, in a manner in line with any religious stipulations of the buyer, and the carcasses exported in chilled or refrigerated containers.

If the trade must continue, attention also needs to be turned to the vessels conducting it. Only one livestock carrier in five was purpose built; the remaining 80% are conversions, mostly starting life as ro-ros or boxships.

These often see a full operational career prior to being repurposed, with a view to squeezing some more money out of them for a few years. With an average age of 41 years, the livestock carrier fleet is the oldest in any shipping segment.

Livestock carrier capsizes in Romania with more than 14,000 sheep on board

According to Lloyd’s List Intelligence, Queen Hind, which is listed as a vehicle carrier, listed heavily to starboard and water ingress was noted in the accommodations block, livestock carriage compartments and the engine room

The conversion process usually increases windage area, which can be detrimental to stability, especially in heavy weather.

As well as facing the strains and stresses of the sea, these elderly hulls are further subjected to huge amounts of animal excrement, with manure and urine taking their corrosive toll on the ageing steel.

Insurer Allianz is calling for the introduction of a universally adopted convention or code on the transport of animals at sea, a demand tabled as long ago as the official report into the sinking of Danny F.II. After all, there are codes for the carriage of almost everything else.

But we are no nearer to that than we were in 2009, with the International Maritime Organization insisting that it is powerless to act unless proposals are tabled by a member state.

That seems a scant defence. Were the political will in place, it would be straightforward for the secretariat to have a word in the right ears to make that happen.

Happen it should. Whatever your take on the philosophical deliberations surrounding animal rights, the basic taboo on wilful cruelty and mistreatment necessitates sweeping changes, sooner rather than later.

Spain once again forced to deal with controversial livestock carrier