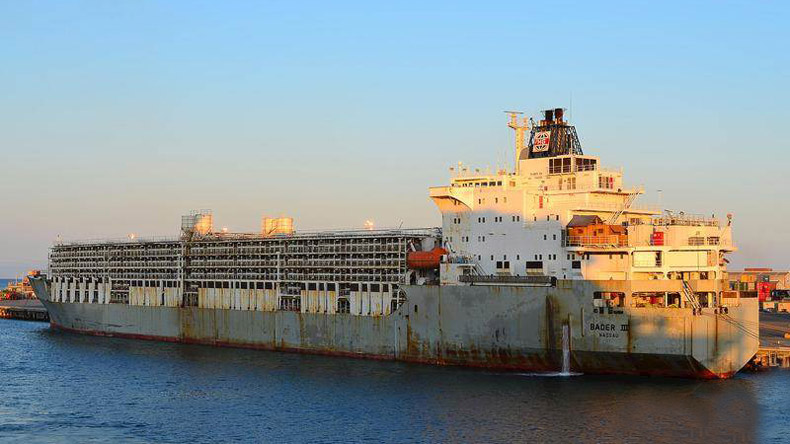 THE need for big improvements in the operation of vessels involved in live animal transport was highlighted by the capsize last weekend of a livestock carrier.

The 2,300 gt vessel, owned by a single ship owning company in Dubai, appears to have been significantly overloaded and only 700 sheep were able to be saved.

Animal welfare non-governmental organisation Four Paws’ UK country director Sonul Badiani-Hamment said she was “saddened to hear of yet another case where thousands of animals have lost their lives on a livestock vessel”.

“As NGOs including Four Paws joined demonstrations to mark Ban Live Exports International Awareness Day on Tuesday, this case is even more pertinent in highlighting why an end to this unnecessary suffering is needed.”

The June 12 casualty comes after an incident in March. The 1973-built Spiridon II (IMO: 7311329) which was carrying 300 young bulls and 7,600 Spanish sheep and suffered engine failure after leaving Tarragona, Spain for Aqaba, Jordan.

Unloading the animals was not permitted due to European Union regulations, so after four days at sea Spiridon II was towed in to a Greek port where the 8,000 animals were transferred directly to another livestock carrier, Adel I (IMO: 8017970), via ramp on the water.

“Despite these repeated incidents, little has changed for live animal transport,” Ms Badiani-Hamment said. “The untold levels of cruelty on board the ships are one of the many reasons Four Paws has been calling for an end to live animal transport by sea for many years.”

The global live animal export business is said to have more than quadrupled in size over the past 50 years with an average of 2bn animals moved annually with an estimated value of $3.3bn. Furthermore, journeys have increased significantly in length in recent years.

According to Lloyd’s List Intelligence data, the livestock carrier fleet numbers 140 vessels with 60% of the fleet, in gross tonnage terms, being in excess of 30 years of age.

With the exception of a handful of well-regarded specialist operators such as Dutch shipowner Vroon and Australia’s Wellard Group, most livestock carriers are operated by small, family owned, companies with some of these owners having a poor safety record and a dubious credentials for the treatment of their ship’s crew.

Last November, the Turkey-owned, 1977-built Elita (IMO: 7601073) was seized at a Spanish port after the captain was arrested on suspicion of falsifying vessel documentation and other crimes.

In 2019, the 1968-built Maysa (IMO: 6829082) was detained in Constantza, Romania by Port State Control office for outstanding wages of the crew with the vessel's 13 crew members not having been paid for more than five months.

The International Transport Workers Federation reported in April that 193 crew members serving on three livestock carriers owned by Hijazi & Ghosheh Group, the world’s largest operator of livestock carriers, had not been paid wages for up to six months.

However, the case was ultimately resolved by the owners with the seafarers, from the Philippines, Pakistan, Jordan and Colombia, having all received their wages in full after several weeks.

Many ships within the current livestock carrier fleet are conversions from a multitude of other ship types.

According to Lloyd’s List Intelligence, more than half of the current fleet was converted from another vessel type. The addition of numerous decks, bearing active live animals, to the structures of former cargo carrying vessels has been cited as a factor in several casualties where stability of the ship was lost.

According to Allianz Global Corporate Speciality senior risk consultant for marine Capt. Samson Rathaur there were several inherent risks for livestock carriers that have been converted from other ship types.

Capt. Rathaur said that vessels which are converted to livestock carriers are often already near or at the end of their life. When these vessels are converted, animal behaviour is not always a factor in their design. Furthermore, the increased windage area of a converted livestock carrier can have an impact on the stability of the vessel, especially in heavy weather.

In 2020, the converted containership Gulf Livestock 1 (IMO: 9262883) sank off the Japanese coast on its voyage from New Zealand to China following engine failure in heavy seas after it capsized. Some 6,000 animals and most of its crew perished.

In 2015, another converted boxship, Haidar (IMO: 9083067), capsized and sank at Vila do Conde, Brazil after having loaded 5,000 cows bound for Venezuela. Some of the animals managed to escape the holds of the ship by scrambling onto the overturned hull, but many of the animals perished in the accident.

Arguably the worst incident involving a livestock carrier is that which befell the converted vehicle carrier Danny F.II (IMO: 7359462).

The 1976-built vessel, originally the Wallenius Lines-owned Don Carlos, was converted by new owners in 1994. It was transporting 10,200 sheep and 17,932 cattle from Uruguay to Syria when it overturned off the Lebanese port of Tripoli with 80 persons on board. All the animals were lost while 55 of the crew, including the master, died.

Capt. Rathaur said that from an insurance company perspective, the livestock carrier sector is deemed as one with a high number of risk factors.

“The vessels are very old, with an average age 41 years, are poorly maintained, or vessels converted that are not fit for purpose, have a poor safety record with many total losses. Furthermore, the fleet has a high rate of port state control detention and there are also concerns with crew competency.”

Considering all these factors, this creates a very low risk appetite for many insurance companies while many insurers have to consider the welfare of animals on board livestock carriers.

Other risk factors that need to be considered include manure and urine which can have an impact on the steel structure of the ship.

“Compared to a cargo vessel, the corrosion rate of a livestock carrier can be higher. The manure ferments to release moisture, ammonia and carbon dioxide and in conjunction with naturally excreted chlorides from animals constitutes the major corrosive components of slurries,” he said.

These can be very corrosive to steel structures and if the vessel is not well maintained can, over time, have a serious impact on the structural strength of the decks.

With many of the livestock carrier fleet being originally built for static cargo, when the cargo changes to a moving, live, one this can have an impact on the stability of the vessel. During heavy weather animals can get distressed and move together to one side which can potentially list the vessel.

Capt. Rathaur suggests that with no universally adopted international convention or code for the sea transport of live animals on ships the livestock transport industry needs to invest further in specific international training for those working on livestock carriers.

“Most states produce their own requirements where they deem it necessary. Crew working on livestock carriers can have little if any training or experience in livestock management before joining their first livestock ship. There is also a constant turnover of untrained newcomers joining and experienced crew members leaving.

“Livestock shipping does not always attract the best of talent from the industry due to the nature of the work on these vessels,” he said.

Animal harm: What to do about livestock carriers

Spain once again forced to deal with controversial livestock carrier