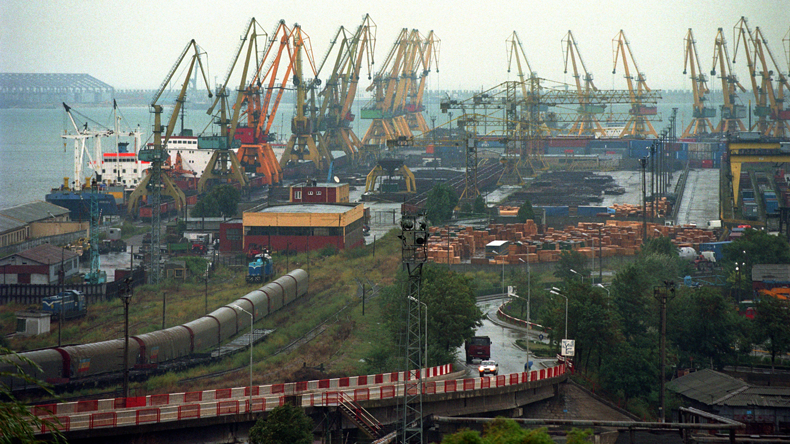 Source: Agencja Fotograficzna Caro / Alamy Stock Photo The Black Sea port of of Constanța, Romania. A mine was sighted northeast of the port recently.

GOVERNMENTS are being urged to “significantly increase efforts” to ensure safe and secure passage for vessels following reports of mines drifting in the Black Sea.

The International Transport Workers’ Federation and the Joint Negotiating Group — the social partners of the International Bargaining Forum — met last week to evaluate and discuss solutions that will ensure that seafarers, and their vessels, do not end up being collateral damage in the conflict in Ukraine, the ITF said in a statement.

The northern Black Sea region, the Sea of Azov (north of latitude 46°N) and all ports in Ukraine have been designated as Warlike Operations Areas to give seafarers greater benefits.

Groups representing seafarers and their employers agreed to extra pay, benefits and rights for seafarers caught in the Ukraine war zones at a special meeting

“The safety and security of seafarers in this evolving crisis, especially seafarers serving in the region is our priority,” said Belal Ahmed, chairman of the International Maritime Employers’ Council. “Reports that mines have been discovered both inside and outside of the designated WOAs raises serious concerns.”

The Nato Shipping Centre has said there was a threat of drifting mines in the northwest, west, and southwest areas of the Black Sea.

“Drifting mines have been detected, and national authorities are working to find and neutralise any other mines in the region. Masters should take all precautions to mitigate the mine threat including avoiding floating objects, keep the forward area of the ship clear of crew, and using effective lookouts.”

The London P&I club said there have been three reports of sea mines drifting in the area.

“Vessels navigating in the Black Sea should maintain lookouts for mines and pay careful attention to local navigation warnings,” it said.

On March 29, a sea mine was sighted 39 nautical miles east northeast of Constanța, Romania. A correspondent there reported that the location was promptly attended by a Romanian naval vessel that destroyed the mine.

A day earlier, a correspondent in Turkey reported sighting a sea mine off Igneada (Black sea side of Istanbul and close to the Bulgarian border), which was deactivated by the Turkish Navy.

On March 26, an unidentified floating object similar to a mine or a bomb was sighted by a Turkish fishing vessel in the vicinity of the north anchorage area for bulk carriers at Istanbul Strait.

Separately, Norwegian shipping company Torvald Klaveness said in its annual report that in order to ensure the safety and security of its staff, minimise business risk and to align with “the intentions of the sanctions currently being imposed” against Russia and Belarus, it has decided not to conduct any business with companies owned or controlled by Russian or Belarusian interests.

“We have discontinued business with Russian counterparts, cargoes and ports,” it said, adding that at the time of the outbreak of the war it did not have any exposure to the impacted areas.

Neutral shipping needs a blue corridor out of Ukraine