It would be unfair to describe this week’s shipping-focused UK government shake-up as nugatory. But not wildly unfair

This was more spin than substance, designed to placate public and media outrage while doing little to address the root causes at work 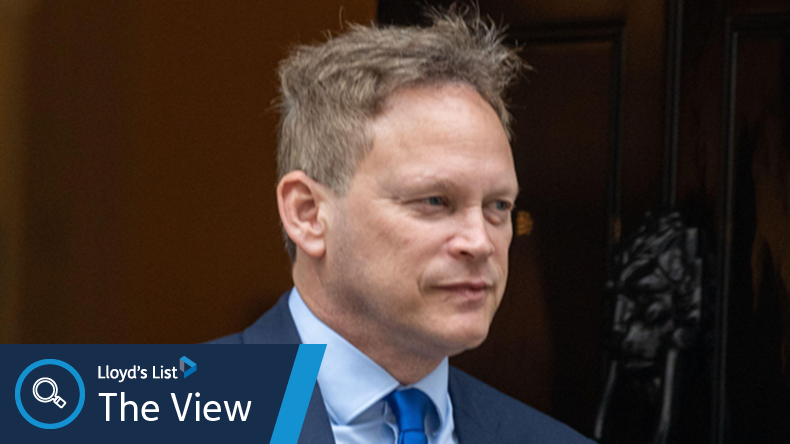 THE ultimate consequences of the illegal mass sackings at P&O Ferries were never going to be borne by that company alone.

The past fortnight has seen a political backlash that could have left rival ferry operators, UK ports, the British shipping industry collectively, employers in other sectors, other European governments, and even the industry globally perilously open to punishment for another’s misdeeds.

As things stand, we can breathe a collective sigh of relief. On any objective assessment, the measures announced by transport secretary Grant Shapps in the House of Commons probably aren’t going to hurt too much.

His proposals bear all the hallmarks of a hasty political response, devised by civil servants who lack a deeper understanding of the way the maritime world works.

Nevertheless, it was a direct statement of intent, and the rough edges the package displays can doubtless be smoothed out in the consultation process.

The desired headline was the news that the national minimum wage, already payable by most other operators in UK waters, will be extended to take in ferry concerns, which are presently exempted.

The UK will extend its minimum wage to seafarers working between UK ports and in the offshore energy supply chain on the UK Continental Shelf, but not on international routes from UK ports

That will have some impact round the margins, especially for lower-cost operators focused on the freight-only trade. But the big consumer-facing brands such as DFDS and Stena all pay at least that much already.

There will be new primary legislation giving ports the power to exclude ferry companies that do not pay the national minimum wage. Until it reaches the statute books, Mr Shapps says he has “instructed” them — a revealingly imperious turn of phrase — to commence the ban immediately.

There are two obvious snags here.

First, ports have bluntly stated that they do not want these powers. They lack the expertise, the resources and the inclination to take on the task.

The enforcement of the National Minimum Wage Act is the statutory responsibility of HM Revenue and Customs, it is not the job of port operators to act as pay police.

Some UK ports are owned by groups that also have ferry affiliates. In such instances, a rival ferry company using the port will have justified objections in handing over sensitive information on pay scales that could find its way into a competitor’s hands unless data protection is rigidly observed.

Second, ports do not have the right to turn vessels away, even where they are minded to do so. Legislation dating back to 1847 expressly provides that ports be open to all-comers who can pay the berthing fees.

There is a workaround when existing contracts come up for renewal, at which point an additional clause could be inserting, attesting that crews are paid the national minimum wage. Even so, that is not going to happen overnight.

For British shipping as a whole, P&O Ferries’ actions have also been an untrammelled public relations disaster. The picture is painted of a hole-in-the-corner industry that treats its employees shoddily.

It’s all very well tweaking the training requirements attached to the tonnage tax in the hope of boosting cadet intake, as Mr Shapps has pledged.

But frankly, few among a generation of young people far more socially conscious than its predecessors will want to give an industry already perceived as a polluter a second if P&O Ferries exemplifies what they can look to in terms of career prospects.

Mr Shapps is also seeking the head of the company’s chief executive on a plate, asking the Insolvency Service to disbar him from being a director. We hope for Peter Hebblethwaite’s sake that his golden parachute arrangements are more ungrudging than the redundancy terms he put on the table his seafarers.

The issue of “hire and fire” has been making its way up the political agenda, with the UK opposition Labour Party and trade unions pointing to the free use such employers as British Airways, British Gas, Tesco and Go North West have made use of the tactic.

P&O Ferries, of course, fired but did not rehire. Nevertheless, the Shapps’ proposals include the provision for a 25% uplift in unfair dismissal payouts in these circumstances. That’s probably no bad thing, if only of minimal comfort to those at the sharp end.

Governments of countries connected to Britain by ferry routes — and they include France, Denmark, the Netherlands, Ireland and Germany — will be approached to agree “minimum wage corridors” for ferry staff.

Simple as that sounds in principle, there may be insuperable jurisdictional difficulties, especially where a ferry is flagged in a third country where lower pay scales are the norm.

The practical consequences will be mixed. Irish Ferries pioneered the use of east European crews on half the Irish minimum wage as early as 2005, and the Irish government has not to date intervened.

At a time when horns are already locked over the Northern Ireland Protocol and the UK is threatening to invoke article 16, Dublin’s quid pro quo for a deal may be uncongenial for a British government keen to present Brexit as an unquestionable success.

By contrast, French-owned Brittany Ferries has a reputation for remunerating seafarers well and can afford a suitably insouciant approach to les pauvres anglais.

Finally, Britain will approach the International Labour Organisation to seek a binding international minimum wage for seafarers. Good luck with that.

The question of how much seafarers from third world countries should get has long been a heated debate between unions and shipowners. Owners point out that for many ratings, earnings are on a par with senior professionals in their home countries. For some governments, remittances are a vital source of foreign exchange.

The ILO already sets a benchmark of $648 a month, and it is hard to envisage agreement being reached on any materially higher sum. The key difference is that the pay level would be obligatory rather than voluntarily.

Even getting that far will be the work of years, and perhaps over a decade. In other words, this is not something likely to be happening any time soon, or even at all.

It would be unfair to describe this week’s UK government shake-up as nugatory. But not wildly unfair. It’s even a fair bet that some of the goods seemingly on offer will be quietly deep sixed.

This was more spin than substance, designed to placate public and media outrage while doing little to address the root causes at work.

That would entail a complete revision of the current framework of employment law, rectifying some of the imbalances that have grown up in recent decades. And that takes us far beyond the realm of shipping policy.

P&O Ferries: Less than the sum of its (old) parts

UK measures over P&O Ferries sacking will have limited impact