Orders for new ships show no sign of abating. Yet while major shipbuilders are still loss-making, profits are expected to make a comeback, thanks to the rapid increase in contract prices in the past few months

New orders for gas tankers and containerships have been the main drivers of newbuilding demand during the first quarter of 2022, on the back of hot markets in the liquefied natural gas and liner shipping sectors 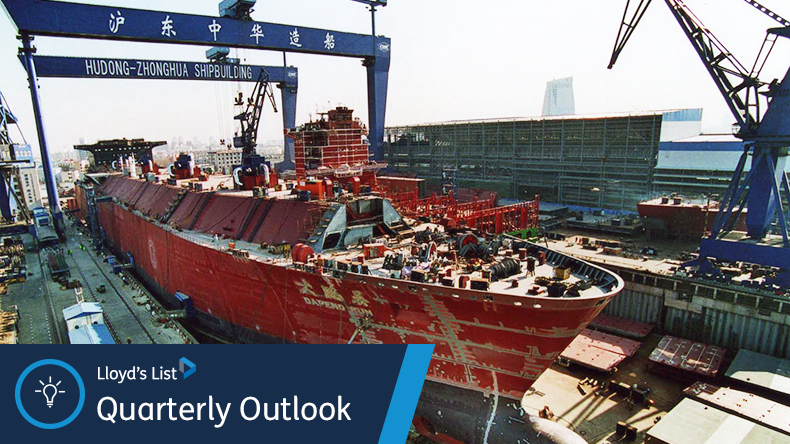 Hudong-Zhonghua is one shipyard that has benefited from burgeoning demand for LNG and containership newbuildings in recent months.

IF the financial performance of major listed shipbuilders provides a reasonable bellwether of the current state of the global shipbuilding industry, then things do not look too rosy.

Nevertheless, surging demand since the beginning of 2021 for liquefied natural gas tankers and containerships on the back of exceptional freight earnings has helped drive an increase in newbuilding contract prices, which have surged by an average of 30% in the past 18 months.

This demand has, in turn, helped to push out lead times so that currently a large containership ordered today has an average lead time of 30-36 months, in comparison to half this length of time two years ago.

Demand for new containerships — which most South Korean and a handful of Chinese and Japanese shipyards excel at building — began to lift off from the start of last year.

This demand has been so great that during the first quarter of 2022, some 70% of all new orders, in gross tonnage terms, were of this vessel type.

This ordering frenzy has brought the newbuilding backlog for boxships up to around 25% of the existing fleet in service.

Interestingly, most recent containership orders have been placed by non-operating owners for the charter market.

However, at the time of writing, additional orders were in the pipeline for liner operators including Ocean Network Express (up to 10 13,000 teu ships) and CMA CGM (nine 24,000 teu units).

Meanwhile, orders for tankers and bulk carriers appear to have almost stalled as overcapacity and geopolitics have driven freight rates down. Given that both sectors already have significant vessel orderbooks, contracted in 2020 and 2021, this should be no bad thing.

In the gas sector, South Korean shipyards in particular have benefitted from rising demand for LNG tankers, with Greek shipowners Maran Gas and Dynagas, Mitsui OSK of Japan, Nigeria LNG and Qatar Gas all placing orders in South Korea during the first quarter of 2022.

New orders expected to be placed soon in the LNG sector include up to 14 vessels for Malaysia's Petronas and a series of ships for Abu Dhabi's ADNOC. In the latter case, the contract is expected to be won by China's Jiangnan Shipyard.

This increase in demand could drive an expansion in shipbuilding capacity going forward. Indeed, Hyundai Heavy Industries has already stated that it will soon reopen its Gunsan shipbuilding facility, which was mothballed after the downturn in orders following the global financial crisis.

As indicated in the above graph, shipbuilding capacity reduced significantly after 2012, following a period of rapid expansion in China. Japanese and Chinese shipbuilders in particular ran down production or closed shipyards altogether after 2012 as the downturn in orders hit the sector.

Clearly the drive to decarbonise shipping has been an important factor in the recent newbuilding ordering bonanza. Significantly, most recent orders for containerships, ro-ro cargo ships and pure car and truck carriers have been for alternative-fuel vessels.

Indeed LNG, methanol and ammonia-ready or capable vessels made up 60% of orders for containerships in the first quarter and 100% of orders for pure car and truck carriers.

With all of these ship types operating on fixed liner schedules, the ability to bunker alternative fuels — now undergoing rapid development — will be far simpler than for most other ship types.

Yet one cloud on the horizon for the global shipbuilding industry is a shortage of labour. While this is not new, labour shortages will provide a constraint to increasing capacity to meet short- and medium-term demand.

The answer to this appears to be increased automation. Samsung Heavy Industries recently introduced robots to its ship production process to cut steel plate and weld it into ship blocks.

The use of robots in this process is understood to have increased productivity by around 40%. Other South Korean shipyards are expected to introduce similar automation processes in the near future.

This article is part of Lloyd’s List’s Quarterly Outlook, which can be viewed in full here. Subscribers can also access and download a PDF copy of the report.

Containers: Box carriers expect more of the same in 2022