International Association of Classification Societies Council members have considered the political and reputational damage being caused by maintaining the Russian Maritime Register of Shipping as an IACS member after the European Union targeted the society as a sanctioned state-owned entity. Following legal advice, the IACS concluded that Russia’s continued membership was ‘no longer tenable’ 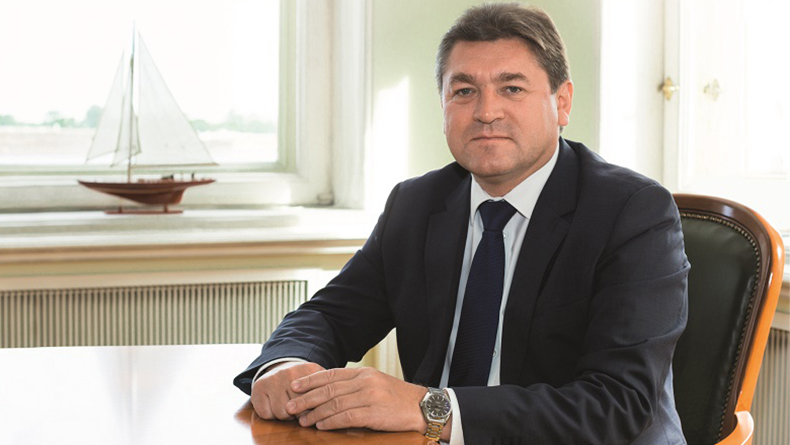 Russian Maritime Register of Shipping director-general Konstantin Palnikov. The organisation has been expelled from the International Association of Classification Societies.

RUSSIA’s primary provider of classification services and technical oversight for shipping has been expelled from the International Association of Classification Societies following a vote by members.

The Russian Maritime Register of Shipping’s membership of the umbrella body for class societies was withdrawn on Friday, following legal advice and a vote by IACS Council members, which concluded that RMRS’ “ongoing membership of IACS is no longer tenable”.

The move follows an announcement by the European Union on Wednesday, which added the Russian Maritime Register of Shipping to the list of state-owned enterprises subject to financing limitations.

While the sanctions do not preclude the Russian Register’s continued membership of the association, Lloyd’s List understands that council members considered the potential political and reputational damage caused by keeping Russia inside the group as well as “external legal advice”.

The call to remove Russia from IACS will now likely hasten the removal of Russian shipowners from other class societies and further isolate Russian shipping’s ability to trade internationally.

Classification societies had been holding off from withdrawing class from Russian controlled vessels, but with Lloyd’s Register the first to pull out and DNV following suit, pressure is mounting on the rest of IACS societies to take a position. An exodus of class services could leave thousands of vessels unclassed, uninsured or moving services swiftly back to Russia

UK class society Lloyd’s Register announced on March 10 it had started withdrawing class from all Russian controlled, owned or managed ships while DNV has started winding down some of its Russian class activities and will cease all new business activities in Russia.

Several other IACS members are officially holding the line that they are “monitoring the Ukraine conflict to ensure operations are in compliance with international trade sanctions”, however privately many expect to start exiting Russian business imminently.

The exodus of Russian ownership and beneficially controlled tonnage from association members will mean that there are limited options to seek class anywhere other than with the Russian Register.

The expulsion of RMRS from IACS will further limit Russian controlled shipping from being able to maintain insurance cover and reduce their licence to trade.

IACS has offered limited details of the discussions that led to the decision, however a statement issued late Friday said: “Following the recent, tragic developments in Ukraine and resulting actions taken by governments and other entities worldwide including, in particular, sanctions in the UK, where IACS is domiciled, IACS Council has been continuously reviewing the developing sanctions landscape to ensure it complies fully with all legal requirements.

“As part of that ongoing evaluation, and following the receipt of external legal advice, IACS Council today agreed that the Russian Maritime Register of Shipping’s ongoing membership of IACS is no longer tenable. As such, and under the terms of its charter, which requires agreement from 75% or more of its members, IACS Council has therefore adopted a resolution that the Russian Maritime Register of Shipping’s membership of IACS is withdrawn with immediate effect.”

The statement continued: “IACS deeply regrets the circumstances that have resulted in this decision and hopes that hostilities in Ukraine will cease as soon as possible, and that peace will return to the region.”

Any change in class for a vessel will generally require shipowners to either renew or find alternative insurance cover, however if class is being provided by a non-IACS society that will severely limited options, particularly in a climate of general unwillingness to engage in new Russian business.

Insurance cover in many cases is dependent on specific class arrangements. Moving class would also invalidate existing certificates issued on behalf of the flag administration and require owners to seek new arrangements.

The move may also spur flag registries to review their current neutral position on maintaining Russian owned and controlled vessels inside their operations.

Flag officials for the major open registries, at least two of which are administered by US-based companies, have argued that open registries have always existed as neutral bodies committed to the enforcement of their own national laws and ratified international conventions.

Responding to questions on whether Russian ownership was being reviewed, a spokesman for the Liberian flag said: “Liberia is a sovereign nation that closely follows and applies international sanctions guidelines as long as they are not in direct contravention with its national laws. The registry conducts rigorous due diligence regarding sanctions compliance, and assesses non-sanctioned entities on a case by case basis.”

The move to vote on Russia’s membership of IACS may also prompt other industry membership bodies to review their current neutral position on maintaining Russian companies. While most are “monitoring the situation”, none of the major representative organisations for shipping with Russian members have removed companies to date.

The Russian Maritime Register of Shipping has been approached for comment.