Ukrainian crews have reportedly been taken off ships in Russian ports, but companies have been urged to check compliance before refusing to call in Russia

Insurers and employers are honing their guidance on how to change Russian or Ukrainian crews as the situation between the two countries blocks their repatriation. Charities are trying to help seafarers contact their families 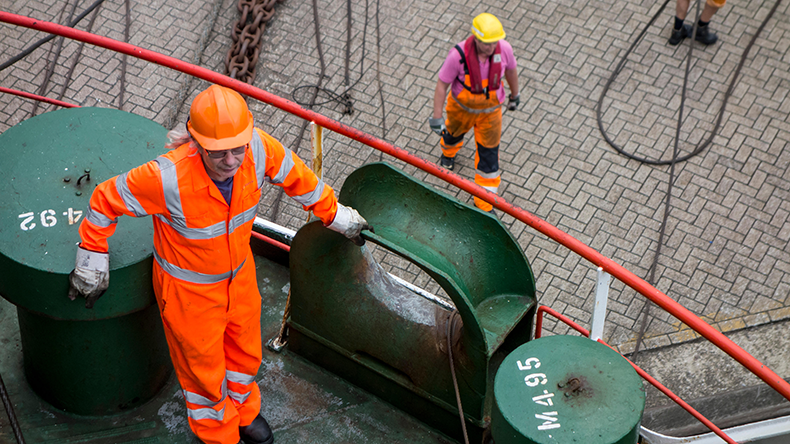 Source: Arterra Picture Library / Alamy Stock Photo Maritime charities say crews around the world are struggling with uncertainty about their families’ safety and when or if they could return home.

INSURERS and employers are grappling with how to change Russian and Ukrainian crew as the crewing impacts of the military incursion worsen.

West P&I Club said repatriating Russians and Ukrainians posed a major logistical challenge for shipowners, with travel within Ukraine neither safe nor practical.

Shipowners had to seek alternatives such as repatriating seafarers to third countries or extending contracts.

“Such alternatives require additional paperwork, agreements with crew members, and — in some cases — approval from authorities to ensure that P&I cover is not affected,” a spokesman said.

Gard, a Norwegian P&I club, said this week that Russian ports were not safe for Ukrainian seafarers and there were reports of crew taken off ships for questioning about their political beliefs. One such crewman was not returned to the ship, it added.

While Russian ports were not unsafe for all vessels, “the situation can change quickly, and risks may arise in the future to vessels and crew from NATO countries in view of the seizure of Russian vessels and assets in Europe and the increase in sanctions against Russia which has been said by Russia to be akin to a declaration of war”.

The International Bargaining Forum, a group of employers and unions that sets pay rates for international seafarers, on Tuesday set out recommendations for repatriating crews from Ukraine.

“Whenever possible, affected seafarers are encouraged to extend their contracts and remain on board,” the group said. “Repatriation requests should be considered on compassionate grounds and in accordance with the Maritime Labour Convention.”

Seafarers that finished their contracts or wished to end them early should be treated as in transit until the day they landed in the agreed third country and should be able to claim all expenses incurred to reach the Ukrainian border.

Employers should provide room and board in the agreed third country for at least two nights, the guidance continued.

ABC Maritime marine personnel and development director George Pitaoulis said his company was planning to put seafarers up in hotels for a month between ships since it was not possible to get them home.

George Mangos, principal of Interunity, a Greek shipowner and manager, said a senior officer on one of his ships had asked and was allowed to leave the ship months early to defend his homeland.

Mr Mangos said operating a sophisticated tanker with dangerous cargo was stressful even in normal conditions and it was “hard to leave the politics aside and focus on the job”. But he was impressed by its workforce’s dedication, he said.

Maritime charities said crews around the world were struggling with uncertainty about their families’ safety and when or if they could return home.

The International Christian Maritime Association, a group of charities, has published a list of initiatives to help Ukrainian and Russian crew. Jazon Zuidema, its general secretary, said chaplains from the Sailor’s Society and Stella Maris charities were helping humanitarian efforts in Ukraine.

He said industry groups and the International Maritime Organization were having emergency talks to co-ordinate relief efforts.

“Pieces of the puzzle are coming together even though the situation is still very fluid,” he said.

The IMO will hold an emergency meeting on March 10-11 to discuss the situation in Ukraine.