South Korean shipbuilders face the greatest risk in the potential cancellation of numerous newbuilding projects. However, analysis of the substantial Russian newbuilding orderbook suggests a supply chain spanning several countries could be in peril

Numerous global equipment and service providers are exposed to the vulnerable Russia-owned newbuilding orderbook, while uncertainty surrounds the handful of vessels being built in European shipyards for Russian account 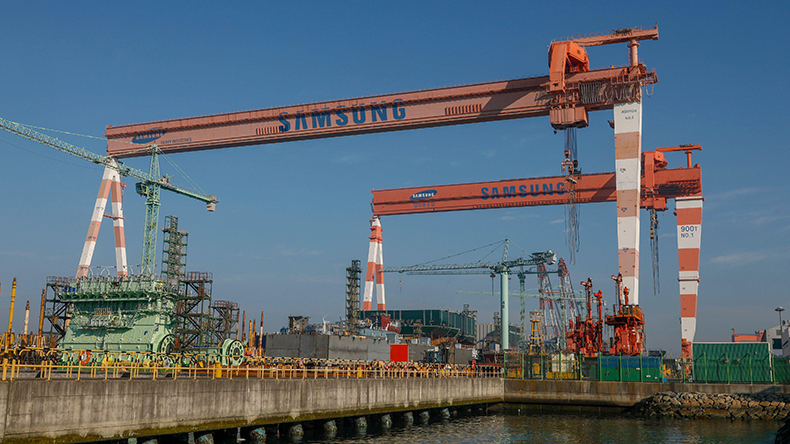 South Korean shipbuilders have the most to lose from any risk tied to their lucrative orderbook for Russian ships in the LNG, crude oil and products tankers sectors.

WHILE Russia has a substantial orderbook for LNG tankers tied to Novatek’s Arctic project in partnership with South Korean shipbuilders, it also has a considerable number of vessels on order across a variety of other vessel sectors.

These include tankers both large and small, fishing industry vessels, icebreakers, offshore support ships, passenger ferries and multi-purpose cargo vessels, not to mention a vast backlog of naval tonnage.

While South Korean shipbuilders have the most to lose from any risk tied to their lucrative orderbook for Russian ships in the LNG, crude oil and products tankers sectors, shipyards elsewhere, together with equipment providers in a global supply chain, will also feel the pain from any fallout in the cancellation or delay of existing newbuilding orders.

Lloyd’s List has a breakdown (below) of the current merchant ship orderbook based on data provided by Lloyd’s List Intelligence together with industry sources.

The South Korean orderbook for LNG carriers and tankers which will ultimately be owned and managed by Sovcomflot and Rosneft, respectively, comprises a mix of vessels to be built directly by the builders in South Korea in addition to hull blocks and components for vessels which will undergo final assembly at Russia’s Zvezda shipyard.

Given the South Korean government’s decision this week to tighten controls over exports, including marine equipment to Russia, this entire project is now on hold at best.

Russia has a significant orderbook of its own, but many of these vessels fall outside the scope of our analysis since they are mostly naval ships or vessels intended for the fishing industry. Much of the equipment for the former is likely to be built domestically.

Some shipyards in Europe have Russian-owned tonnage on their orderbooks.

In Finland, the former Wärtsilä Shipyard in Helsinki, now known as Helsinki Shipyard and owned since 2019 by Russia’s Algador Holdings, has an order in hand for a 20,000 gt icebreaker for Rosmorport for delivery in 2025.

In the Netherlands, Damen is due to build a series of tugs for Russia at its various global shipbuilding facilities, including two in Vietnam. Furthermore, the Netherlands’ considerable equipment supplier industry is likely to be hit by the present turmoil.

Turkish shipbuilders have orders in hand for fishing industry vessels, including a pair of large fish factory ships due to be built by Tersan, while the Atlas Shipyard is due to deliver an icebreaking offshore supply ship later this year.

In China, several shipyards are involved in building small product tankers, multi-purpose vessels and fishing industry ships for Russian ownership. While these are mainly being built at small yards, Qingdao Beihai, one of the Chinese majors, is building a large crane ship for utilisation in the construction of the LNG and tanker programme at Zvezda shipyard.

Foreign classification societies with exposure to the Russian orderbook comprise Bureau Veritas, which is working with the Russian Register of Shipping in the joint class of the majority of Sovcomflot’s LNG tanker programme, while Italian class society Rina is involved to a more limited extent in the newbuilding supervision of small vessels under construction in China.

Substantial equipment providers involved in Russian newbuildings include France’s GTT, which is providing the tank technology for the Sovcomflot programme.

Some 40% of tonnage on order is set to utilise a WinGD or Wärtsilä-designed main engine.