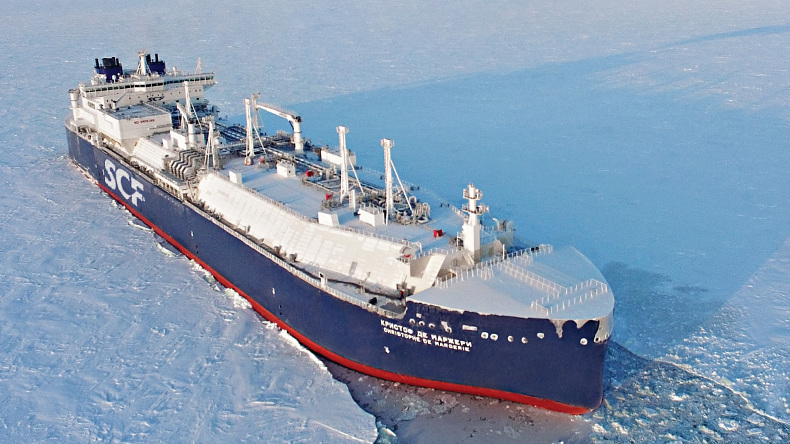 Sovcomflot and its partners have ordered a large fleet of LNG carriers to support its LNG projects in the Arctic.

CONCERNS are mounting among large South Korean shipbuilders that the escalating sanctions moves against Russia could adversely impact their prodigious orderbook of liquefied natural gas carriers.

“We are worried whether we can get the money from the shipowner as Russia is being sanctioned and their bankers are being blocked,” an official from Hyundai Heavy Industries told Lloyd’s List.

The company has three atlanticmax newbuilding LNG carriers that are scheduled for delivery to Sovcomflot from 2024.

The Russian shipowner is now being restricted from selling new debts and shares to raise funds from US entities, as part of the broader punitive actions taken by the US and its allies to hold Moscow liable for its invasion of Ukraine.

A November investors’ presentation showed it needed about $5bn to fund its entire orderbook of 32 ships over next three years.

Sovcomflot chief financial officer Nikolay Kolesnikov told Lloyd’s List last week it was too soon to comment on the sanctions or the implications for its orderbook.

However, more powerful measures — including freezing the Russian central bank’s overseas assets and barring some banks from the Swift interbank payment system — have prompted companies to become increasingly hesitant about dealing with their Russian counterparts to avoid compliance pitfalls.

The HHI official said his company has a relatively “small exposure” to Russian interest when compared to its domestic competitors, who should be more worried.

It is also the builder of four Arc-4 LNG carriers jointly placed by Sovcomflot and Japan’s Nippon Yusen Kabushiki Kaisha (NYK Line) last October. SHI did not respond to a request for comment.

The situation has been further complicated by a South Korean government decision this week to tighten controls over exports to Russia and join the partial Swift ban on some Russian banks.

In addition to supplies of electronics, semiconductors and computers, marine equipment is also included in a list of “strategic items” subject to the export restrictions.

An official from Daewoo Shipbuilding & Marine Engineering said the company was aware of the new policy but unsure whether newbuilding ships would fall into that category. “We are still trying to find out more details from the government,” said the official.

DSME was contracted in 2020 to build six Arc-7 LNG carriers — three for Mitsui OSK Lines and three for Sovcomflot — which are for delivery in 2023 to serve the Arctic LNG 2 project.

The Ministry of Trade, Industry and Energy, which oversees the country’s shipyards, has been approached for comment.

One Seoul-based shipbuilding analyst said it was too early to tell whether the Russia-related ship orders would be cancelled or delayed as many of the sanction rules still lacked granular guidelines. “But there are certainly more risks now than before.”

The latent risks, however, have apparently not been felt by investors who have kept buying shares in the South Korean shipbuilders.

The share prices of Korea Shipbuilding & Offshore Engineering, HHI’s parent, and SHI have both jumped more than 7% in recent days. DSME surged over 22%.

The uptrend was spurred by expectations that the yards will win more orders for LNG carriers to ship gas into Europe, which is anticipated to reduce its pipeline imports from Russia amid the rising tension in the region and compensate the losses.

While such a prospect is welcomed, it is unlikely to be happy in near term, said the HHI official, as the development and construction of new LNG plants is expensive and will take many years to complete.

One possible way is for cargo from existing projects to be diverted to fit the new geopolitical reality, according to Banchero Costa head of research Ralph Leszczynski.

Last year, Russian LNG exports to Europe and other Western allies such as Japan, South Korea and Taiwan totalled 26m tonnes versus 32m tonnes of Australian exports into mainland China.

Europe could source LNG from Australia, which remains locked in a trade dispute with China, while the latter is expected to expand its purchase of gas from Russia.

The shift will be extremely costly but require a lot more ships, said Mr Leszczynski.

“From an economic point of view this would make no sense in normal times, but then politics seem to be trumping economics pretty often these days.”