Christian Ingerslev, chief executive of Maersk Tankers, says concentration on commercial management after the sale of its technical management business will enable the reshaped business to bring scale and greater efficiencies to the fragmented product tanker trades, where smaller owners will struggle to meet decarbonisation goals, and optimise fleet deployment, on their own 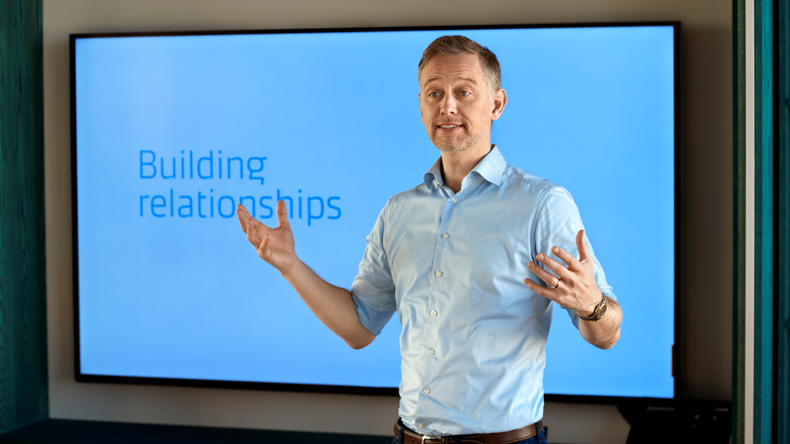 Source: Maersk Tankers Ingerslev: Progress on decarbonisation should be shared by the whole industry.

MAERSK Tankers’ decision to sell its technical management operations and drastically reduce its workforce appears counterintuitive for an organisation that is putting people at the heart of its business as it maps out an ambitious growth path.

But in an industry where scale is becoming so essential, Maersk Tankers concluded that it should focus on commercial management after completing a four-year transition from a traditional tanker owner to a service company that is determined to drive efficiencies throughout the whole market. That requires a much smaller workforce, which has been reduced from a headcount of 3,300 to 294 following the takeover of its technical arm by Singapore’s Synergy Marine last September. The terms of the deal have not been revealed.

Growth will now be focused on commercial management, underpinned by the need for structural change in a highly fragmented segment of shipping where most product tanker fleets consist of four ships or fewer.

“How do you squeeze out efficiencies from a system that is extremely dispersed?” asks Maersk Tankers chief executive Christian Ingerslev.

The answer is consolidation.

Even Maersk Tankers, the largest in its sector with 220 ships under commercial management for 49 owners, only has a market share of around 5%.

That is tiny compared, say, with the container trades where mergers and takeovers have shrunk the number of global players from more than 20 a decade ago to about eight, with market shares of up to 17%.

While Maersk Line has led this rationalisation in the container trades, Maersk Tankers now aims to show similar leadership in the tanker market and has set a goal of increasing the number of vessels under its management to 300 ships within three years. Even so, that will only lift market share to about 6% of the world’s 5,000 or so product tankers, ranging from handysize up to long range two units.

Mr Ingerslev believes that target is nevertheless an ambitious one, representing another 80 ships from third-party owners that currently account for 166 of the total, with tonnage owned by affiliate business Maersk Product Tankers representing the balance. Commercial management could also include tankers up to very large crude carriers, since some of its smaller tankers already ship dirty products. This is unlikely to become a core business, though, with so much untapped potential in the product tanker sector.

However, it is not vessels but staff who are moving centre stage within Maersk Tankers.

“The hero in our story is changing from ships to people,” says Mr Ingerslev.

For buying or selling ships is relatively simple, whereas managing those vessels as effectively as possible for clients is a very different matter.

The expansion target represents a 50% growth in third-party ships.

“That not only requires people to be excited about the product, but also about the idea of coming together, because we know shipowners are proud of their assets, and want to be part of the decision-making,” says Mr Ingerslev.

“So we need to be able to visualise to them why being part of our commercial management offers them value and the same transparency and insights as doing this themselves. By gaining scale we can provide not only a great time charter equivalent and customer experience, but help them during their decarbonisation journey.”

Maersk Tankers hopes this customer experience will deliver a high net promoter score, a measure of client satisfaction, in excess of 30.

As well as the advantages of scale, and Maersk Tankers’ ability to optimise deployment by ensuring the best ship is allocated for a particular fixture, clients will also benefit from the algorithms created by digital spin-off ZeroNorth that calculate the optimal speed at which to operate a ship against a backdrop of variables, ranging from freight rates and bunker costs to weather conditions and vessel specifications.

Set up originally by Maersk Tankers and chaired by Mr Ingerslev, ZeroNorth is now owned by AP Moller Holding and Cargill, with plans to bring in more investors. The change of ownership is to ensure emission-reduction solutions are available for all industry participants, and are not regarded as a Maersk Tankers preserve.

Maersk Tankers, which dates back to 1928, was sold by AP Moller-Maersk in 2017 as the Danish conglomerate withdrew from energy-related activities to focus on integrated container transport logistics. The buyer was AP Moller Holding, the investment arm of the Maersk Mc-Kinney Moller family, which retains a majority interest in AP Moller-Maersk.

That change of ownership marked the start of the transformation of Maersk Tankers, which subsequently ceased ship ownership to become a pure service company. Ship assets were placed in the hands of Maersk Product Tankers, a joint venture between AP Moller Holding and Mitsui & Co, which is totally agnostic about the size of its fleet, buying and selling as opportunities arise. In 2021, more than 30% of the fleet was sold, according to Mr Ingerslev, who is also chief executive of Maersk Product Tankers. That followed a considerable number of ship purchases in 2018 and 2019.

The commercial management of Maersk Product Tankers vessels is handled by Maersk Tankers, while technical management has been transferred to Synergy Marine, allowing good collaboration between all parties as the whole industry focuses on the key issues of the day — decarbonisation and future fuels.

However, this separation between ownership and management has freed Maersk Tankers to concentrate on operating efficiencies, with scale needed to enable the tanker industry to achieve the green transition, and manage the shift to renewable energy.

Mr Ingerslev says he is confident Maersk Tankers has the capability to commercially manage a growing fleet, with its large footprint, and a history of innovation and pioneering new solutions for the benefit of the entire industry, whereas the company did not have sufficient scale in technical management.

For Maersk Tankers, the decision to transform from a classic tanker owner to service company had already been made in the head. But now, says Mr Ingerslev, it’s in the heart as well.

Join Lloyd’s List and an expert panel on February 3 for our first webinar of 2022, titled ‘People Power – Recruiting and Retaining Expertise for an Era of Transformation’. For more information and to register, follow this link.

Transition from classic tanker owner pays off for Maersk