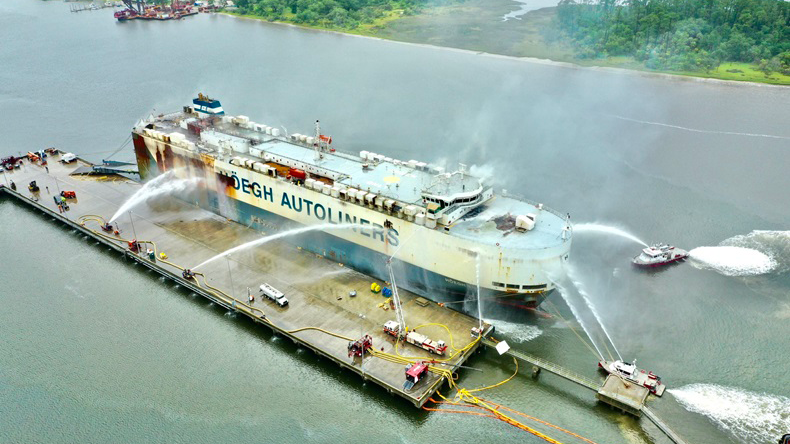 Source: Jacksonville Fire and Rescue Department The fire took over a week to extinguish and caused injury to nine firefighters.

AN electrical fault from an improperly disconnected battery in a used vehicle led to a fire on board a vehicle carrier which resulted in $40m worth of damages, the US National Transportation Safety Board said.

The blaze in June 2020 on board Hoegh Xiamen (IMO: 9431848) broke out in the port of Jacksonville, Florida, shortly after it had completed loading of a consignment of used cars bound for West Africa.

The fire — which took over a week to extinguish, and which caused injury to nine firefighters — resulted in the vessel being declared a constructive total loss, with a $26m payout on hull cover led by Norwegian Hull Club.

Its cargo of 2,420 used vehicles was declared a total loss valued at $40m, with liability falling on the cargo insurers.

P&I club Gard also has potential liability for what will be a major personal injury claim from the firefighters.

Car carrier is declared a constructive total loss following a fire on board the vessel last month at the Port of Jacksonville. The vessel was on charter from Ocean Yield

Salvage operations were completed in August 2020, with the vessel towed to Turkey to be recycled.

There have been at least five major fires on pure car and truck carrier vessels since 2015, and the issue is of growing concern to marine insurers.

The National Transportation Safety Board marine accident report concluded that many of the vehicles loaded on to Höegh Xiamen had batteries which were not disconnected and secured in accordance with applicable procedures, which increased the risk of electrical arcing and component faults.

Detection of the fire was delayed because the vessels’ fire detection systems had not yet been reactivated after loading was completed.

Additionally, the Jacksonville Fire and Rescue Department’s response to the accident was delayed because the master did not immediately have available contact information for search and rescue authorities and did not know how to report a fire to local authorities.

The safety board’s report determined the probable cause of the fire on board Höegh Xiamen was ineffective oversight of longshore personnel on the part of charterer Grimaldi Deep Sea and its stevedoring contractor SSA Atlantic.

The two companies did not identify that Grimaldi’s vehicle battery securement procedures were not being followed. This resulted in an electrical fault from an improperly disconnected battery in a used vehicle on cargo deck eight.

Contributing to the delay in the detection of the fire was the crew not immediately reactivating the vessel’s fire detection system after the completion of loading.

Contributing to the extent of the fire was the master’s decision to delay the release of the carbon dioxide fixed fire extinguishing system.

“The transportation of used vehicles, such as those that were loaded on vessels like the Höegh Xiamen, is currently excepted from Hazardous Materials Regulations when a vessel has a stowage area specifically designed and approved for carrying vehicles,” the report said. “We found that used vehicles are often damaged and present an elevated risk of fire.

“We believe that greater inspection, oversight and enforcement are needed to reduce this risk.”

The National Transportation Safety Board has issued eight safety recommendations to federal regulators and the companies involved in the accident.