The resolution for a zero-emissions target faced another day of objections. Tougher measures are likely to hit the same roadblocks 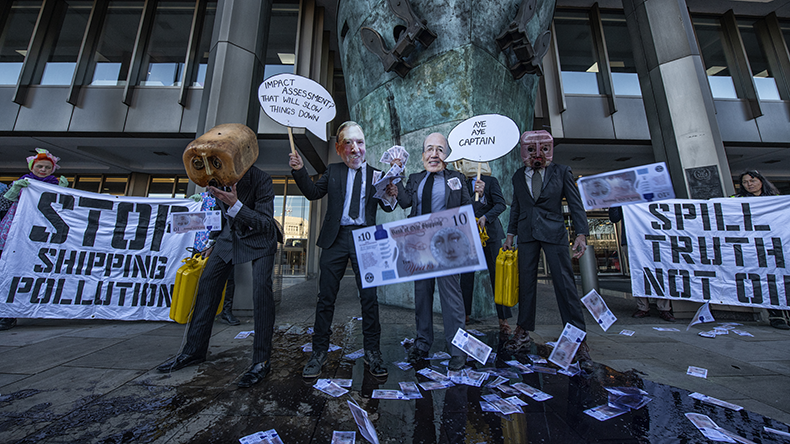 FAMILIAR divides about regulating global shipping emissions consumed most of the negotiating time at the International Maritime Organization.

Countries in the IMO’s pro-environment camp voiced worries about lack of progress as the clock ran down on the second day of the Marine Environment Protection Committee.

“After COP26 the world is watching us closely… the international media has already started to pound on us,” Jamaica said, warning the resulting headline at the end of the meeting must be “IMO comes to its senses” rather than “IMO dithers again”.

Tonga told the MEPC it was “incredibly saddened” at the lack of political will on display and suggested converting its resolution into a statement that could be appended to the chairman’s report to save time.

Australia said it supported a net-zero-by-2050 goal without mentioning the resolution.

A host of EU members as well as China, Russia and India lined up to oppose a resolution for the IMO to set a zero-emissions target by 2050, just as they spoke of the need for strong action on climate change

European Union members including Lithuania and Malta joined Slovenia and France in opposing the resolution on the grounds the IMO should spend its time on concrete proposals instead.

But Paraguay, Nigeria and others raised the usual concerns about the cost of emissions rules to developing countries and joined calls for impact assessments, financing, capacity building and technology transfer for those countries’ benefit.

Environment groups and some delegates told Lloyd’s List they were surprised that EU members had declined to support the resolution.

An environment source branded it “cowardice”, saying the resolution was a “very simple proposition” that with EU support could have gone through, given what he called majority support for the zero-by-2050 target.

One EU delegate who had objected said he wanted to back the political declaration but said the inevitable political fight should be over concrete measures rather than political resolutions with scarce discussion time left.

“We’re opposed to the format of the resolution, but we fully support the content,” he said.

When the time came to discuss actual regulation proposals, such as the Marshall Islands’ $100-a-tonne carbon tax or Norway’s cap-and-trade scheme, there was just 10 minutes left of working time.

That leaves only one more three-hour working day to discuss mid and long-term emissions measures in the next six months until MEPC78, though the time could be extended.

The Cook Islands voiced concerns about the MEPC’s mounting workload, and that of the IMO Secretariat, adding the latter had called to hire extra staff to cope.

“The MEPC is lagging behind on a host of traditional environmental issues,” it said.

Green NGO, the Clean Shipping Coalition, said shipping’s carbon budget was 10 gigatonnes of carbon dioxide if it was to help keep global warming at 1.5°C. That budget would be blown by 2029 if current emissions continued.

Earlier, activist group Ocean Rebellion staged a theatrical protest outside the IMO’s London headquarters, portraying the regulator as in thrall to the oil industry.

It called on the IMO to “do the right thing and agree on a pathway for mandatory carbon reductions by 2030”.

“If this does not happen shipping will account for roughly 15% of global emissions by 2030 and will have long since exhausted its share of the carbon budget to stay within 1.5 degrees,” the group said.

Solomon Islands urges shipping to back net zero target by 2050