Solomon Islands urges shipping to back net zero target by 2050 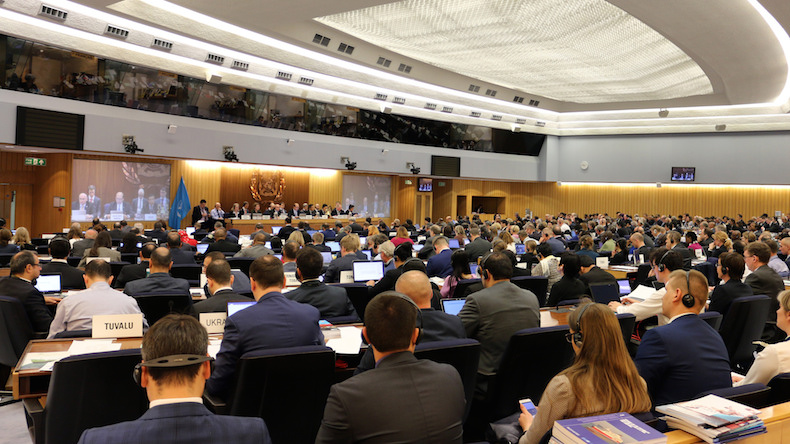 MEPC will revise its initial greenhouse gas strategy in 2023.

GOVERNMENTS should support a new pledge to achieve net zero emissions from international shipping by 2050 or risk sending a damaging message, according to officials representing a country that is highly vulnerable to climate change.

Michael Prehn, the representative to the International Maritime Organization for the Solomon Islands, said he is confident that most governments convening the Marine Environment Protection Committee believe his country’s joint push with the Marshall Islands and Kiribati for net zero emissions international shipping by 2050 is a positive step for the sector.

Their proposal is a non-binding resolution under which governments “recognise that international shipping reaching zero greenhouse gas emissions by 2050 is essential to keep the Paris Agreement temperature goals within reach”.

The International Maritime Organization’s environment committee meets next week in wake of the COP26 summit. A resolution for shipping to set a zero-emissions-by-2050 target is the headline item, but the lack of a breakthrough at Glasgow has dampened expectations for this goal at the IMO

Yet it would amount to a clear signal that member states in the IMO are firmly geared towards adopting a net zero target for 2050, potentially even a pure “zero” emissions target that countries such as the US and Norway have called for.

The IMO has a target to reduce shipping emissions by at least 50% by 2050 compared with 2008 levels. But the MEPC will revise its initial greenhouse gas strategy, including the targets, in 2023.

Failure of the resolution to pass, even if it were on the grounds that the 2050 target issue should be discussed within the formal revision of the initial strategy in 2023 rather than now, would be damaging for the IMO.

“That would still send a totally negative message about what the IMO is doing,” Mr Prehn told Lloyd's List.

Jimmy Nuake, deputy secretary of the Solomon Islands Ministry of Infrastructure Development, said that it has become clear that business as usual is no longer going to cut it to reduce global warming and that will have to include the shipping sector.

The Solomons Islands and the Marshall Islands have also proposed a $100 greenhouse gas levy on all international shipping emissions. It would see most of the revenues directed towards developing nations and those most vulnerable to climate change.

With more than 50 countries recently pledging support for levy on shipping, Mr Prehn is confident that the Pacific Island nation’s $100 proposal fits the bill for what these nations want to see in a levy.

But he also acknowledged that these countries would need to actively support the proposal in the IMO and that finalising the levy will be a more complicated process than passing the 2050 net zero resolution.

Despite growing support from industry and countries, there is still strong opposition to the levy by other countries, especially developing nations that are dependent on trade and who are concerned about an increase in trading costs.

Mr Nuake said that until governments put all their issues on the table and thoroughly discuss the proposal, convincing countries to join up will be challenging.

Nonetheless, Mr Prehn remains confident that when all the details are fleshed out, countries will be supportive of the levy given the need to reduce the price gap between fossil fuels and zero-carbon fuels in the future.

“Because the alternative is something like the European Emissions Trading System or other regional measure... or having a global ETS which is really a vast construction to create from nothing,” he said.

Mr Prehn also said that the levy could be implemented alongside a low-greenhouse gas fuel standard, a technical measure that the European Union, the US and Norway are pushing for, to help with the deployment of zero-carbon fuels.

Decarbonisation: The new language of shipping