Message to Ms Thunberg: Shipping’s getting there slowly

Some 14 countries now back a demand for zero-emission shipping by 2050, and 50 want to see an IMO climate change levy. Momentum is building for actually doing something

The Swedish climate activist’s suggestions about where to stick climate change are clearly anatomically unfeasible. But five days of ‘blah, blah, blah’ at the COP26 summit, there are small and welcome signs of progress 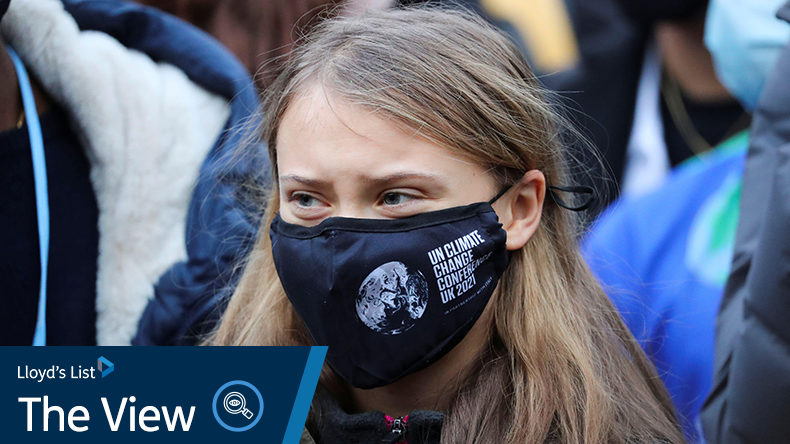 GRETA Thunberg’s suggestions about where to stick climate change are clearly anatomically unfeasible.

But five days into the “blah, blah, blah” of the COP26 climate summit, there are small and welcome signs of progress.

Nobody ever accused the United Nations bureaucracy of undue alacrity, and the pace of discussions so far will disappoint the teenage climate activist wunderkind and less excitable observers alike. Still, slow headway is better than no headway.

Deals on phasing out methane, coal, and fossil fuel funding — while riddled with exceptions and loopholes, and noticeably not signed off by some of the world’s largest polluters — are at least being talked about.

In addition, financial institutions representing nearly $9trn in assets have agreed to uproot deforestation from their investment portfolios.

From our industry’s perspective, the call from 14 states — fronted by the US, UK, Denmark and the Marshall Islands — for zero-emissions shipping by 2050 was undoubtedly a good start.

Yet even with maritime heavy hitters like Panama now backing the demand, it is not clear whether momentum is sufficient to persuade their 161 International Maritime Organization peers to follow their lead.

A more substantial display of firepower came from a coalition of more than 50 nations particularly vulnerable to the effects of global warming. These parties backed an IMO greenhouse gas levy intended to bring shipping into line with the 1.5 degree temperature goal set down in the Paris Agreement.

The wording of their statement may have been generic, but it does throw the weight of dozens of least developed countries behind a doubling of the IMO’s current none-too-taxing and dilatory aspirations.

Unfortunately, not all of them have representation inside Albert Embankment, where the debate on the distribution of the revenues the scheme would create remains hugely contentious.

The litmus test will be what happens when the IMO begins its discussions on climate in the week after next, once the circus has moved on from Glasgow.

Another area in which enthusiasm is growing this week at COP is climate finance. The biggest headline here is former Bank of England governor Mark Carney’s eye-popping promise of $130trn in commitments.

This $130trn equates to rather more than one-and-a-half times current global GDP. Cynics may wonder how much of that unimaginably vast amount Mr Carney will be able to deliver.

But irrespective of how many bucks finally make their way into this enormous pool of climate cash, shipping’s share is likely to prove nugatory.

For all the enthusiastic industry support for a shipping research and development fund, $5bn spread over 10 years is not going to touch the sides of what will truly be required.

It may even end up being an unhelpful distraction inside the IMO, where precious negotiating time would be better spent on meatier carbon measures.

Shipping needs to bridge the gap between ra-ra rhetoric and the homeopathic sums currently devoted to siloed pilot projects.

That flow of cash is best unlocked by securing demand that will allow scaling up, while unlocking the flow of public and private finance.

Firms have little reason to stump up the multibillion-dollar capital green technologies require if they only offer mediocre risk-adjusted returns. The immediate goal must be to convince investors they are a worthwhile proposition.

If the industry can muster corporate support for so-called Green Corridor project, complete with tangible timelines, and make sure zero-emission ships are the default choice by 2030, then why wouldn’t you put your money into shipping?

We suspect Ms Thunberg is not a Lloyd’s List reader. But we admire her pluck, fortitude and forthright mode of expression.

The more enlightened elements of the shipping industry may not be as far away from her ideals as she probably assumes. We’re just fuddy duddies about the speed at which humanity can get there.