Shipping must not cop out, even if the UN does

The industry has two goals at COP26: To remind world leaders it exists and needs their help, and to make sure Albert Embankment gets a move on

A breakthrough in Glasgow would be preferable. But IMO member states must reach a deal on shipping emissions, whatever happens 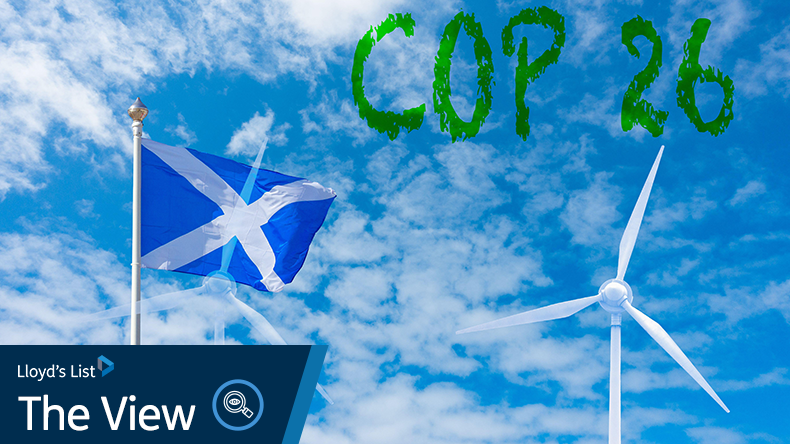 Source: Islandstock / Alamy Stock Photo Success at COP26 could spur the IMO to pick up the pace.

EXPECT a lot of noise, promises, and greenwashing in the two weeks from Sunday, when the COP26 climate conference kicks off in Glasgow, Scotland.

But don’t forget that the annual gatherings of the UN Framework Convention on Climate Change rarely live up to the hype that precedes them.

Come to that, they rarely live up to the hype that follows them, either. Neither the Kyoto Protocol nor the Paris Agreement came anywhere close to making good on the promises rendered at those worthy confabs.

As things stand, global warming is still on a trajectory to hit 2.7°C by the end of the century, when the scientific consensus is that anything over 1.5°C will be catastrophic for humanity.

The increased advent of extreme weather, forest fires and flash flooding and the likelihood of rising sea levels and population displacement on an unprecedented scale mean that leisurely inaction is no longer an option.

States are supposed to rock up to COP conferences armed in advance with serious proposals to cut emissions. In practice, much can go wrong, and much always does.

Economists charged with devising ingenious carbon pricing schemes sometimes find it difficult to agree on how much carbon should cost.

Then there’s the question of how to ease the burden on poorer countries, which bear less of the blame for climate change, but feel more of the pain it causes.

And as is always the way with consensus-driven decision making, a group can move no faster than the speed of its least-ambitious member.

This year there is in addition the pandemic to contend with, and an energy crunch that has prompted an embarrassing return to fossil fuels in Europe.
All of this will feel depressingly familiar to watchers of the International Maritime Organization, which meets later next month to resume its own pow-wow over cutting shipping’s emissions.

Shipping leaders hope the Glasgow summit will heap yet more pressure on the IMO to increase its own climate ambition. There are growing calls, including from Lloyd's List, for a target of net-zero emissions by 2050.

A 50% reduction in shipping greenhouse gas emissions by mid-century was never a credible ambition. Lethargic progress towards a lacklustre goal is simply no longer tenable

Success at COP26 could spur the IMO to pick up the pace. Failure could give it an excuse to dither and delay, as is the unfortunate natural propensity of bureaucracies always. That must not happen.

The industry and governments must get down to the nitty gritty of setting a carbon price or equivalent measure to deter emissions and bridge the price gap with future fuels.

It must then ensure the funds raised make shipping companies greener, not just poorer.

Decarbonisation is probably the hardest task the industry has ever faced. The need is for patient co-operation of all parties over long months and years of grinding diplomacy.

The IMO must move faster and deal unflinchingly with the proposals already before it. Stakeholder opinion is increasingly becoming impatient, and there are penalties for tardiness.

The Getting to Zero Coalition Transition Strategy outlines a path for the industry that partly sidesteps the IMO, and the longer the IMO is unable to come up with the goods, the higher stand the chances of exactly that happening.

Shipping should not wait for, or rely on, any rabbits that COP26 will almost certainly fail to pull out of its collective hat. We already know what our job is. It’s time we got on with it.