Unwinding of logistics logjam to determine the direction of rates in the coming months. Port congestion at this scale has not been seen in China since the halcyon days of the 2000s Source: Tom Paiva / Alamy Stock Photo Nearly one in every 20 ships from the global fleet of some 11,850 bulk carriers is now waiting at ports in China to either load or discharge cargo.

ALMOST 6% of the world’s bulk carrier fleet is at anchor off Chinese ports as rising port congestion underpins bulk carrier rates, now at their highest in 11 years.

Some 599 bulk carriers (over 10,000 dwt) totalling 52.6m dwt are tracked at key anchorages along the Chinese coast, according to Lloyd’s List Intelligence data compiled by Lloyd’s List. 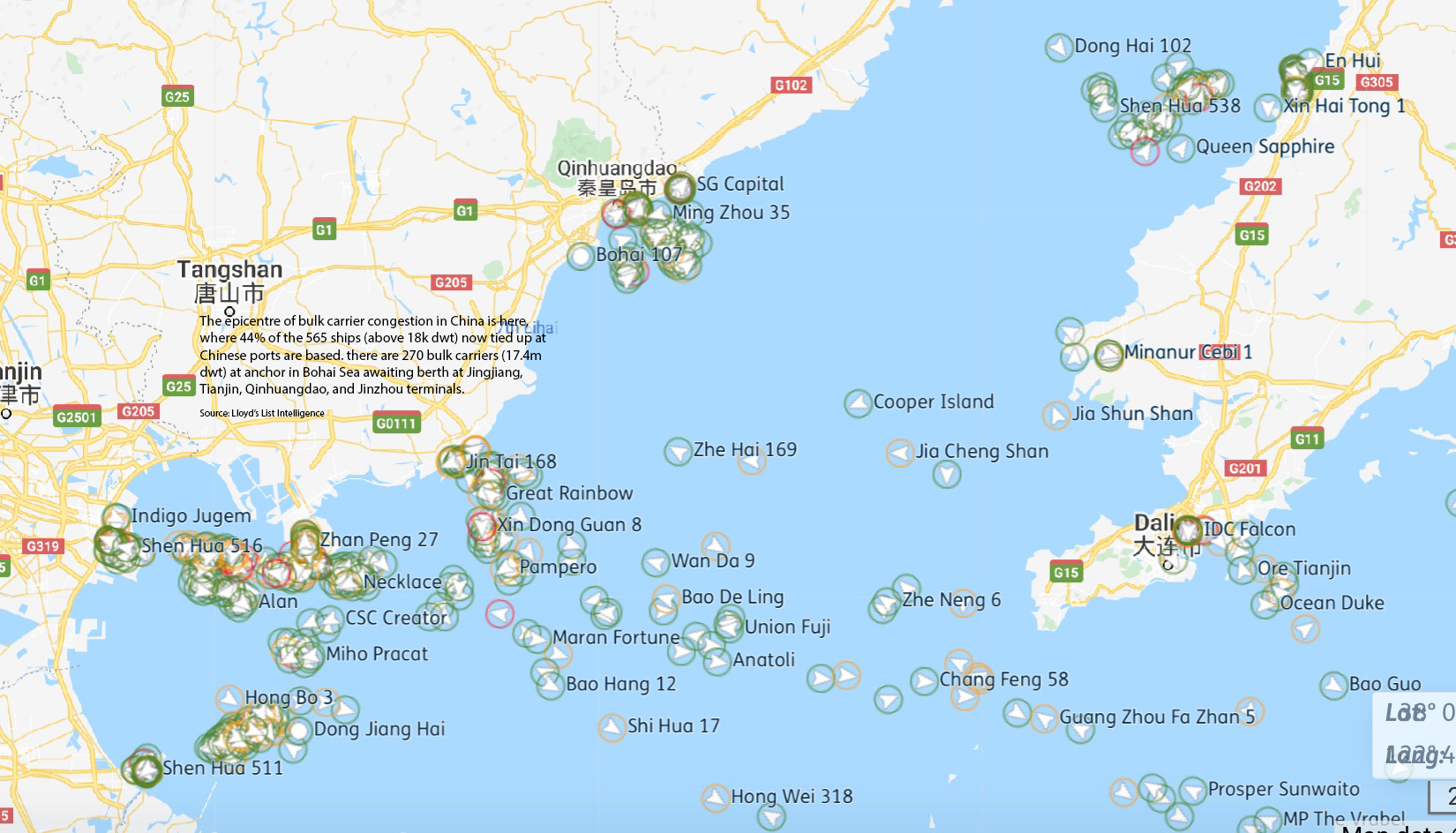 The massive logistics logjam means that nearly one in every 20 ships from the global fleet of some 11,850 bulk carriers is now waiting at ports in China to either load or discharge cargo.

The biggest chokepoint is in northern China, where 238 bulk carriers exceeding 16.3m dwt are tied up and awaiting to berth at grain and coal terminals at Jingjiang, Tianjin, Qinhuangdao and Jinhou.

Shanghai and Ningbo — already subject to extensive containership congestion after a box terminal was shut earlier this month after a worker tested positive for coronavirus — is the next most-congested.

Congestion has been rising for the past two months and appears to be steadying in the country’s north.

Some 565 ships including 270 bulk carriers of 17.4m dwt were tracked in northern China in the Bohai Sea on July 21, some 30 more vessels than seen five weeks later.

Cargo operations on ships calling from foreign countries cannot begin and the vessel must await at anchorage until PCR tests have been carried out on all crew, a port operations manual cited by Lloyd’s List shows.

At some ports, the tests are carried out when the vessel berths, while at others any ships whose last call was India, or another country where there are high rates of infection, the ship must quarantine at anchor outside the port for between two weeks and 28 days.

“Due to the new breakout at Nanjing a few weeks ago, the Yangtze River area is now very restricted due to the lack of pilots at CJK pilot stations for upriver navigation,” he said in an email distributed to Lloyd’s List.

Port congestion at this scale has not been seen in China since the halcyon days of the 2000s, when China’s entry into the World Trade Organisation triggered the commodities super-cycle that spurred bulk carrier rates into levels beyond $200,000 per day by 2008.

“Tonnage supply remains very tight in the Atlantic for September dates,” said analyst Burak Cetinok. “While it [congestion] has stabilised recently, it remains well above the long-term average; as of the end of last week, about 17% of the capesize fleet was tied up in congestion globally.

“If congestion remains elevated over the next few days, we could expect capesize earnings to push higher this week.”

The global fleet of bulk carriers over 10,000 dwt is estimated at around 11,850 ships, totalling 917.3m dwt, according to shipbrokers Simpson Spence & Young’s most recent monthly report. That included the capesize fleet of nearly 1,900 ships (78m dwt) and more than 2,900 panamax ships.