While new orders recovered strongly in the first half of the year, yards are troubled by surging steel prices and have been forced to mark up their products, even though that could cut down business 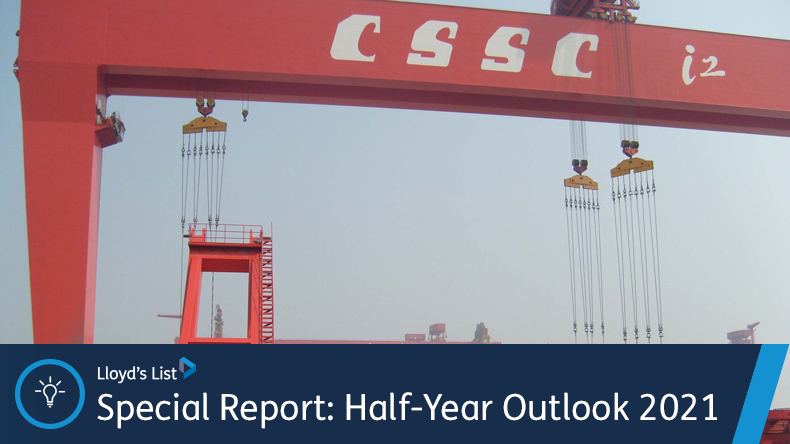 CSSC won 18.4m dwt of new orders in January to June this year, exceeding the amount a year ago by almost three fold.

NEWBUILDING orders have enjoyed a remarkable rebound so far this year following a market depression in 2020.

The rocketing freight rates, especially in the box shipping market, fleet renewal driven by stricter environmental requirements, and the increasing speculative interest have all boosted the activity.

Statistics compiled by China’s shipbuilding association (Cansi) show new orders won by South Korean shipyards jumped 716% year on year in the first half of 2021 to 11m cgt, while their Japanese rivals recorded a 14.3% growth to 1.9m cgt.

The figures are based on Clarksons data, company disclosures and other open source information.

While Cansi has yet to release the results in China, the first five months have already seen its new orders up more than 200% to 9m cgt.

State-owned China State Shipbuilding Corp, which is the world’s largest shipbuilding group by assets, said it hit its 2021 annual order target in just six months, with 18.4m dwt contracted in January to June, exceeding the amount a year ago by almost three fold.

Equity analysts appear optimistic about the outlook of the shipbuilding companies they cover.

The company boasted a backlog worth $7.7bn as of the end of June — higher than the 2008 peak of $6.9bn — of which $5.5bn were orders clinched this year. Most of those fresh tonnage are boxships.

“With the Shanghai Containerised Freight Index remaining high at a record level… we think shipping clients could be pressed for slots and will pay to secure the space,” said Ms Lim.

It told investors that the liner shipping market remained strong because of continued port congestions and customers’ desire for stable supply.

In addition, “containerships require more fossil fuel than other types of ships. In order to overcome this situation, owners will actively consider transitioning to eco-friendly ships”, DSME said.

Meanwhile, the order spree in the dry bulker sector appears on its way as the Baltic Dry Index elevates.

Data from China Newbuilding Price Index, which tracks ship prices at domestic yards based on inputs from 21 broking houses, revealed at least part of the uptrend.

According to its statistics, dry bulker orders placed at Chinese yards in the first half of the year jumped 140% to 12.4m dwt.

Allied Shipbroking noted that the record levels of freight earnings have pushed up owners’ demand for further fleet expansion.

“Given the positive market outlook, buying confidence and the current fundamentals, we expect more [orders] to be announced in the coming weeks, with a notable focus to be given in the smaller size units,” it said.

Nevertheless, yards are being pestered by one big problem: a disappearing margin pared by rising shipbuilding costs, in particular the steel prices.

A senior yard executive said many of the contracts announced in the second quarter of this year were options of the firm orders signed in the first quarter or even earlier. Hence, these were loss-making deals with almost the same ship price yet much costlier ship plates, he added.

“So, we have to increase the prices for new deals, even though that may cut down on some of our business, such as speculative orders.”

The guidance price for very large crude carriers and capesize dry bulkers and 15,500 teu boxships were up by 14%, 26% and 24%, respectively, over the period.

Further upward pressure is expected as iron ore prices continue to surge amid strong demand for the commodity, despite China’s attempts to curb the mark-ups.

As a result, ordering enthusiasm could be tempered in the second half of the year.

Some brokers, however, argue that owners who have or are making a fortune out of the hot market will not stop ordering as they are less sensitive to the high newbuilding prices.

Others pointed out that the uncertainties over new emission-cutting measures and the extra investment in energy-saving devices and fuel technologies on board may help owners keep a cool head.

This article is part of Lloyd’s List’s ‘Half-year outlook 2021’, which can be viewed in full here. Subscribers can also access a downloadable PDF of this report by clicking here.

Enjoy the markets fizz, but beware the hangover

Container shipping thrives amid the chaos