Insurers say increased incidence of blazes on container vessels could be a function of increasing size, and that regulations are neither tough enough nor specific enough 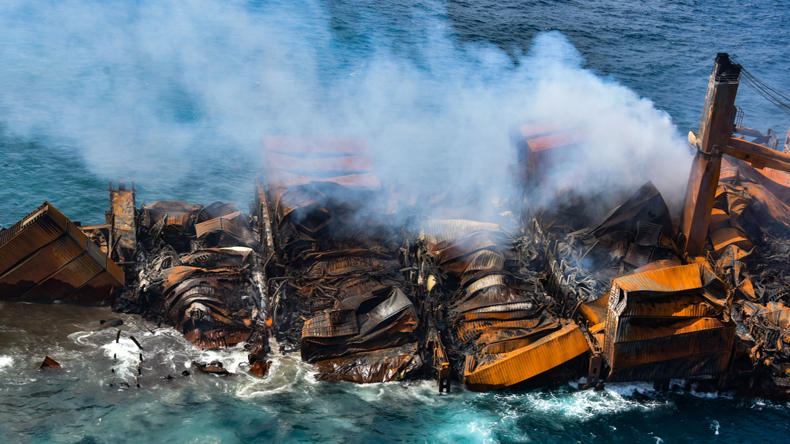 Source: Sri Lanka Air Force X-Press Pearl devastated: Several marine insurance professionals confirmed that misdeclaration of cargo and/or failures of packaging will be among the lines of investigation.

FIRES on boxships continue to cause concern among marine insurers, with X-Press Pearl the latest in a long line of such casualties in recent years.

Such blazes are one factor in the record level of claims on the International Group pool, which came in just shy of half a billion dollars last years, with proportionally deleterious impact on P&I club bottom lines.

The cause of the fire on X-Press Pearl has still to be determined. Several marine insurance professionals, who declined to be named, confirmed that misdeclaration of cargo and/or failures of packaging will be among the lines of investigation.

There are no signs yet of chemical or oil spillage from the fire-stricken containership. But authorities still fear further pollution

High profile instances include MSC Flaminia in 2012 and Maersk Honam in 2018, with the loss of three and five lives respectively. The latter was the most expensive general average claim in history until Ever Given ran aground in the Suez Canal in March this year.

Rigorous statistics for the year to date are not yet available. But anecdotally, instances are said to be occurring at least once every two weeks, bucking the trend to reduced overall claims frequency on account of the impact the pandemic has had on sailing schedules.

Estimates are limited to those fires notified to insurers, with rapidly-extinguished smaller fires going unreported.

In addition, while fires have historically tended to originate in the engine room, an increasing number emanate from cargoes. That may indicate that the increasing size of containerships is a problem.

“The larger the number of containers on board, the higher the probability that at least one of the containers could contain something that self-ignites and causes a fire.”

In the first quarter of 2019, an unusually large number of boxship fires was recorded. In 2020, the number was slightly reduced, but was still above the average for the years before 2019.

“Average frequency is complex,” said Peregrine Storrs-Fox, risk management director at marine mutual TT Club. “Boxship seafarer contacts will say that there are cargo-related fires at sea on a weekly basis. The vast majority of these are tackled by crew and do not lead to anything substantial.”

According to TT’s analysis, what it regards as a major fire — involving multiple containers and almost always external firefighting assistance — is seen roughly every 60 days.

Extrapolating from published data around cargo screening activities, there could be over 150,000 cases of non- or misdeclared dangerous goods with the potential to cause fire each year, according to Mr Storrs-Fox.

Each of them could result in a major, life-threatening fire and result in substantial damage and pollution.

“The sparse inspection data available to IMO, in particular, has been a concern for many years; the reports demonstrate material levels of non-compliance, but are not statistically viable to inform regulatory action,” he added.

Cefor’s managing director Helle Hammer said that after a spike in 2019 and a quieter 2020, these casualties are occurring and will continue to occur.

“We would like this not to happen, at all. Our focus should be on early detection to prevent it from happening, and on the firefighting mechanisms. We don’t think current regulations are sufficient and are not made specifically for container vessels.”

Apart from her obvious concern over insurance payouts, she also pointed out that lives are at risk, and environmental consequences can be serious, as it seems will be the case with X-Press Pearl.

Boxship under coastguard escort after fire