Having hit 11-year highs this week the Baltic Dry Index bull run appeared to be slowing on Thursday as both politics and coronavirus infections once again steered the agenda and the capsize rate started to tail off. For containers the good times continue to roll and, if Maersk’s results are anything to go by, the profits are rolling in for the lines. Meanwhile, there may be growing optimism of a vaccine-led recovery in crude demand across significant oil-consuming countries in Europe and north America but somebody forgot to send the memo to the tanker market 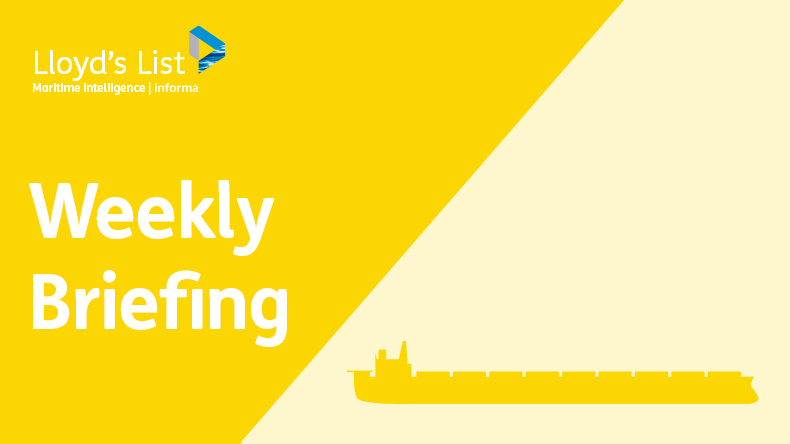 CONTAINER shipping continues to reap the benefits of unusually strong demand for containerised freight, and the bottlenecks that are preventing it flowing freely.

Maersk, the world’s largest box carrier, announced a record set of earnings, making nearly as much profit in the first quarter of this year as it did in the whole of 2020.

Maersk managed this not by taking a larger share of the market or from carrying far more containers — its volumes grew by just 5.7% — but from the steady rise in freight rates in both the spot and contract market.

Those rates continue to be pushed up by congested ports and slow turnaround times that are making empty equipment scarce. And when demand is stronger than supply, rates will only go one way.

Maersk expects the current “exceptional situation” to continue at least in to the fourth quarter of the year.

Singapore-based Ocean Network Express also said that the broken supply chain was likely to remain in place for the foreseeable future as it too posted record results for its 2020 financial year, which ended on March 31.

ONE attributed its success to the recovery of cargo demand and an increase in the short-term freight market but warned that the pandemic continued to cause turmoil within the entire global supply chain in the first quarter of this year.

Steady demand was still straining the system, it said, as the operational restrictions resulting from the pandemic remained in place.

This logistical disruptions had led to a downturn in service reliability that, while showing early signs of improving, still remains a near record lows, with just 40% of ships arriving on time, a situation described by one analyst as “frankly disastrous”.

Efforts to improve reliability have largely been thwarted by poor port efficiency, which has seen ships spending far longer alongside, as well as from the closure of the Suez Canal last month, which saw many containerships delayed by a week or more.

Perhaps one positive note was that the congestion that had been feared in European ports following the Suez Canal blockage was not as bad as expected.

But that may have been only relative to how bad the congestion already existing, with the closure of the Suez Canal making the box crunch at Europe’s ports appear only slightly worse than it already was.

Nevertheless, the six-day closure following the Ever Given grounding will is likely to add another two to three months to the time it takes for the equipment shortage to be resolved.

The dry bulk market has been a theatre for hope and joy since the previous month. But no one is sure if it is only a rehearsal for success or the real show.

The pandemic-related downcycle was severe for most of the world and now there is a combination of inventory rebuilding and demand for bulk goods simultaneously boosting vessel employment and freight rates.

The Baltic Dry Index has been trending upwards over recent weeks boosted by a burgeoning capesize market that saw rates hit the highest level in 11 years on the back of China’s almost insatiable demand for raw commodities for steel-making.

The BDI climbed to 3,266 points at the close on Wednesday, the highest since mid-2010, but by Thursday that bull run appeared to be faltering.

Asia’s iron ore benchmarks also rose after China “indefinitely” suspended all activity under a China-Australia Strategic Economic Dialogue, in the latest setback to the strained relations between Beijing and Canberra.

That seems to have been enough to end the capsize run.

Forward freight agreements which provide insight into current market sentiment, had also surged over the past two months on the back of record-breaking iron ore prices, iron ore demand and rising grain exports.

The return of volatility has seen dry bulk futures bought and sold in volumes last recorded in 2008, with some 816m tonnes of freight traded in the first four months of the year, according to data reported by shipbrokers to the Baltic Exchange.

The spike in spot rates and futures values indicates traders, miners and operators see freight rates for the largest bulk carriers cooling into the third and fourth quarters of 2021, before returning to average nearly $16,000 daily into the first three months of 2022.

However, the spike in virus cases in India has become a dress rehearsal for disappointment which may impact seaborne demand going forward.

As steelmakers are diverting oxygen from their factories to help mobilise the supply of oxygen concentrators or providing medical support, the demand for coal may see a fall.

Additionally, monsoons and a large stock build-up are forecast to induce an above-seasonal slowdown in Indian coal trade flows in the coming months impacting the demand for capes and panamaxes.

There is growing optimism of a vaccine-led recovery in crude demand across large oil-consuming countries in Europe and north America but somebody forgot to send the memo to the tanker market.

While Brent crude appears this week to have shrugged off concern about India’s deadly coronavirus outbreak to flirt with $70 per barrel, spot market earnings for product tankers and crude tankers remain dire, and below operating expenses on most key routes.

This dire state of affairs will be on parade in coming weeks as listed tanker companies begin to report their first quarter of the year results.

DHT Tankers kicked off with the depressing observation that any recovery in crude demand was “in the conceivable future”. The company reported a quarterly profit — but only because 16 of the 28-tanker fleet were on better rates through longer-term time charters and thus not exposed to the dreadful spot market.

Euronav’s chief executive Hugo de Stoop remains to be convinced. While confident that “the market will recover in the medium term”, the tanker surplus that is depressing rates remains, Mr de Stoop said on Thursday as he reported a $71m first-quarter loss.

Meanwhile the tanker sector is also facing the prospect of more woes as the full extent of India’s coronavirus spike becomes apparent. Despite the assumption of potential higher tanker demand, Alphatanker reports there is anecdotal evidence to suggest that tanker owners are becoming increasingly wary of permitting their vessels to call at Indian ports, adding another degree of complexity to voyages and raising the potential of quarantine.

If quarantine for tankers was to be introduced, it would heavily impact vessels on short voyages, especially to and from the Middle East.

The Lloyd’s List Podcast: How will the Suez blockage impact marine insurance?

Weekly Briefing: Dry bulk on a high | All eyes on Maersk for containers | Tankers gauge impact of Iran return