The unblocking of the Suez Canal following the Ever Given casualty has unleashed a wave of containerships through the canal. But that will bring as many problems as it solves to the freight supply chain 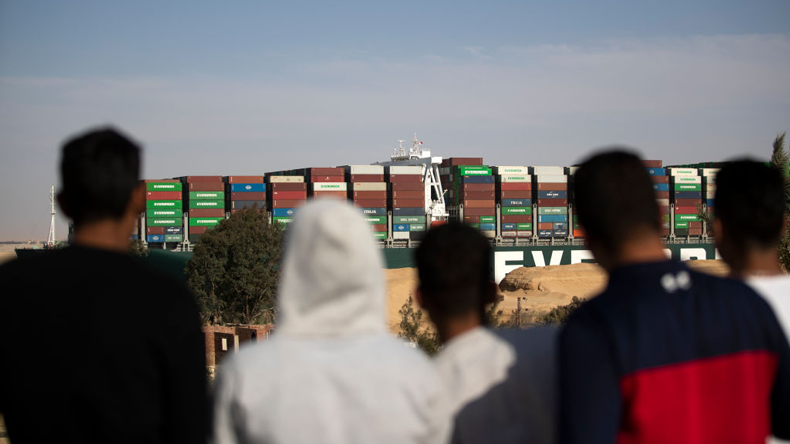 Source: Mahmoud Khaled / Getty Images Ever Given may have moved on, but the problems it caused are about to hit shippers in Europe.

AS CONTAINER ships resume their passages through the Suez Canal and the backlog of ships awaiting transit begins to abate, the focus is now moving towards the deluge of volumes about to hit Europe’s already disrupted supply chain.

Leth Agencies, the canal’s largest agent, reports that 163 vessels have passed through the canal since it reopened on Monday afternoon.

However, data from Lloyd’s List Intelligence shows that there are still 74 containerships waiting to transit the canal, 43 of them waiting at the southern entrance and heading to Europe.

And Leth warned that on average another 53 vessels were arriving to join the queue each day.

Carriers will be searching for berths in ports around Europe to offload their cargoes. But shippers are already expressing concerns over what will happen to cargoes and asking that carriers communicate clearly over delays and diversions.

The containerised freight supply chain was already struggling with high levels of demand and pandemic-related constraints before the Suez Canal closure, and the latest blow threatens to further disrupt supplies of goods.

“The champagne cork has suddenly popped open and I think we’re going to see similar pressure brought to bear on northwest European and US east coast ports,” said James Hookham, secretary-general of the Global Shippers’ Forum. “I think the lines have learned from last year that there needs to be greater interaction with ports to try to manage this, rather than just turn up and queue.

“There will be some skips and diversions, but they need to keep us informed.”

Customers with containers destined for Southampton or London Gateway could find those boxes sent to Rotterdam or Antwerp, he warned.

That could also incur additional surcharges for repositioning, depending on the terms of the contract signed.

But during the crisis last year, stock arrived from Asia just as the shops were closing due to lockdown, Mr Hookham said.

“This time it will be the complete reverse. With UK shops reopening next week, I’m sure a lot of summer stock and garden furniture will be on those ships. That may frustrate some of the retailers. The challenge will be getting that into stores as quickly as possible.”

But the situation may not be as bad as last year, when there was a massive disembarkation of stock that no one wanted.

On mainland Europe, however, which remains badly affected by the pandemic and which could be heading into further lockdowns, the situation will be less favourable.

“There will be a shortage of empties coming back. You could start to prioritise UK ports because you know you’re going to get cleared faster.”

Some European ports are already preparing for the onslaught of containers.

According to Port Authority of Valencia estimates, the increase in traffic is expected to be between 20,000 teu and 25,000 teu, based on traffic held up on the south side of the canal.

This will be added to the daily traffic handled in the port, which averages of 15,000 teu per day.

“The Port Authority of Valencia expects that the arrival and departure of this retained traffic will be spaced out over the 10 to 15 days following next weekend, which will allow the impact to be minimised,” it said.

Maersk warned in its latest customer advisory that while it was doing its best to mitigate the impact and minimise the total impact of supply chains, it was expecting a “significant loss in capacity over multiple weeks”

“Depending on market dynamics, we have decided to temporarily cease short-term bookings placed via Spot, as well as short term contracts this week and in the immediate future.”

It assured shippers that the suspension would be temporary to allow it to move existing laden cargo and empties to the areas they were most needed.

Separately, Mediterranean Shipping Co said it expected that the disruption from the canal closure could continue through the second quarter as ships and empty containers were repositioned.

Freight rates have not yet shown any appreciable rise due to the Suez closure, but there are fears that the reduction in capacity caused by many ships taking the longer route around the Cape of Good Hope, along with equipment shortages, could soon lead to rate hikes as shippers struggle to book space.

Some carriers are already predicting a rise in spot rates and surcharges due the disruption.

“GSF is warning shippers to be wary of this signalling of future prices and of demands for new surcharges,” said Mr Hookham. “This incident was not our fault and the reasons why customers should be expected to pay extra, on top of record shipping rates for goods delivered late and for reasons ultimately of the industry’s own making, should be challenged.

“The shipping industry is reminded that ‘Suez’ is a canal in Egypt, not an excuse to price-gouge your customers.”