Owners may have to cancel voyages if even one crew member refuses — or has not had — immunisation, legal opinion for trade association finds

Chinese and UAE ports are already turning back ships, but ‘no jab, no job’ is likely to become the normal position 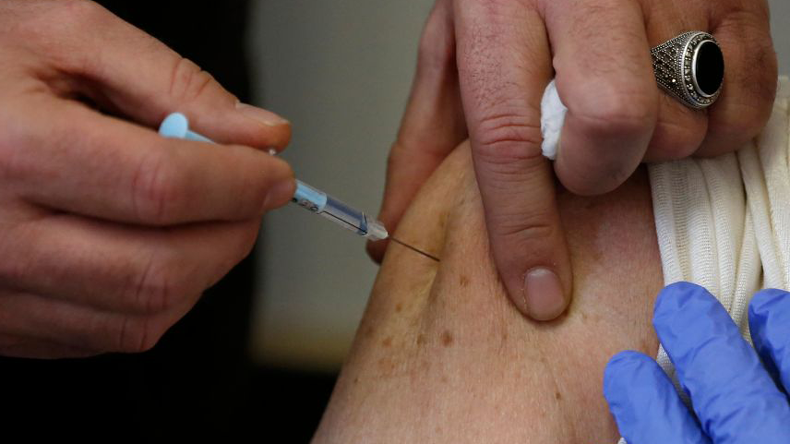 Source: Abbas Momani / AFP via Getty Images Owners must consider any vaccine refusals on its own facts and offer an individual response.

SEAFARERS cannot be compelled to be vaccinated against coronavirus even where states insist all crew members must be inoculated prior to making port calls, the International Chamber of Shipping says.

The situation could put owners in the invidious position of having to cancel voyages rather than take on the legal, financial and reputational risks of being denied entry, the trade association added.

Some ports in China, a vital destination for both box and bulk vessels, and the United Arab Emirates, a key region for transhipment, have already refused entry on vaccination grounds.

Owners have for some time urged that seafarers should be accorded priority vaccinations on account of their vital economic role. But this has not been widely granted.

Mass vaccination programmes are well underway in some richer countries, although many developing countries will take until 2024 to complete roll-out.

With some 900,000 seafarers hailing from the developing world, this issue is also of concern to the ICS.

The Nautilus Federation of 22 unions wants a worldwide vaccination programme for seafarers and inland waterways transport crew, to help resolve the crew change crisis and ensure seafarers do not miss out on vaccines

Where jabs are available, seafarers in most cases will likely be keen to receive the protection immunisation brings.

At present there no way of knowing how many seafarers will be prone to what has become known as vaccine hesitancy.

But polling evidence has found reluctance to be widespread in the general population, running as high as 30% in the US and even 40% in some European Union countries such as France.

ICS legal director Kiran Khosla has prepared a legal opinion to be distributed to members later this week as the industry prepares for the resumption of more normal trade in the wake of vaccination roll-out. The document is based on information picked up through industry networks and an understanding of employment law.

“The basic principle is that no one can be forced to have medical treatment, and if you try to impose a vaccine on someone who is refusing, that would be in contravention of their human rights concerning their own person,” she said in an interview. “What the shipowner must then do is look at the reasons for that refusal and see if it is reasonable or not.”

If existing contracts of employment do not insist on all necessary vaccinations for countries of port call, they cannot be unilaterally varied in retrospect. So in the first instance, a way would need to be found to work around the problem.

If this proves not possible, consideration must be given to whether it is reasonable to require the seafarer to leave the ship at the next possible place.

However, the situation changes as contracts come up for renewal. At that point, owners can justifiably require vaccination as a condition of employment, which they will likely do in the expectation that most places will require it at some point.

“Then it is up to seafarers to decide whether they can sail on those terms. If they are vaccine hesitant, they will not take the employment. We’ve heard the phrase ‘no jab, no job’ within the UK, and I think that will translate to the shipping environment.”

The starting point for the analysis is the Maritime Labour Convention 2006, which obliges owners to provide access to medical care on board ship and ashore, but does not explicitly include provisions for vaccinations or immunisations.

In this respect, the national law of the flag state or of the seafarer’s home country is determinant. While it was not feasible to review the laws of all states, it is possible to establish general principles based on English law.

Firstly, employers have a duty of care and an obligation to reduce risks in the workplace, which would justify them encouraging employees to be vaccinated to protect themselves and their workmates.

However, vaccination requires an individual’s informed and voluntary consent. Owners must consider any vaccine refusals on its own facts and offer an individual response.

This could entail implementing alternative solutions, such as the use of personal protective equipment, additional social distancing measures, or an alteration of work duties to reduce contact with other seafarers.

The founder of Synergy Marine said countries should help vaccinate seafarers who call at their ports as a gesture of goodwill to those who keep their supermarket shelves stocked. But a virus expert said it was hard to say when crews can expect the jab

But if the refuser’s presence in the workplace poses a threat to the wider workforce, employers may ultimately consider not allowing unvaccinated employees to work.

In some limited circumstances, employees could be dismissed for refusing the vaccination if it means they will present a threat to themselves, patients or customers.

Another issue is the lack of any universally approved vaccines so far. The safest option for shipowners, is to include a provision in the contract of employment requiring all new onboarding seafarers to be vaccinated in accordance with vaccines approved in their home country.

Vaccines can currently only be accessed through government-run programmes, but it may in near future be possible for owners to obtain authorised vaccines, and for vaccinations to take place on board under approved conditions.

Where vaccination effectively becomes an occupational requirement for work at sea, the owner is liable for ensuring that it has been offered, at no cost to the seafarer. This condition would be met where governments provide free vaccinations for citizens.

Where seafarers fall ill due to a reaction to an approved vaccination, the shipowner’s liability for illness and/or death is as stipulated under the terms of employment and any applicable collective bargaining agreement.

However, where the seafarer has voluntarily taken the vaccine, for example because it has been offered by his or her government, then the shipowner would not be liable, the ICS document stated.

Low seafarer vaccination rates could be headache for marine insurers

Testing seafarers can be part of pandemic fightback, says consultant

Greek owners urge priority vaccination for ‘heroes of the sea’