Transpacific traffic has continued to surge, with headhaul teu totals up by more than a third on the year-ago level in the latest reporting month

The latest figures on the deepsea container trades show unwavering demand through November of the past year, with little sign of a peak-season end. Gains ensured carriers continued to claw back lost business earlier in 2020, with year-do-date figures up until the end of the month tracking just 1.7% behind 2019 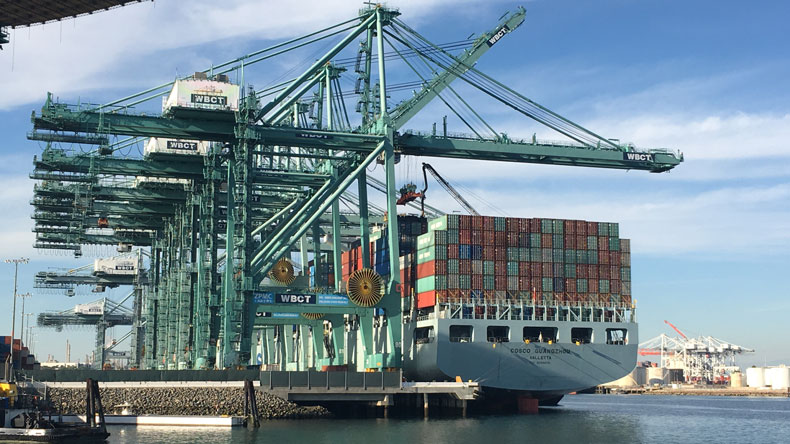 Source: Janet Porter BIMCO expects full-year volumes to have fallen by less than 1.5% in 2020.

CONTAINER volumes on the principal deepsea trades continued their ascent in November, as the market recovery gained further strength through the fourth quarter of 2020.

The latest figures published by Container Trades Statistics show that global volumes carried that month were recorded at 15.2m teu, a rise of 8% on November 2019 to prolong the trend of rising box numbers way beyond the sector’s traditional peak season.

Despite a slight drop on October traffic, the marked rise in figures brought the global year-to-date total up to 152.9m teu, which is down just 1.7% on volumes reported through the first 11 months of 2019, according to CTS. This too marks a significant turnaround from earlier in 2020, when analysts and container lines themselves were forecasting a substantial drop in full-year volumes owing to the coronavirus backdrop. Initial estimates were for a fall of double-digit percentage propositions or of high single digits at the very least.

Volumes on the transpacific have led the charge. The latest data shows headhaul volumes edging up to 2.03m teu in November, a rise of 38% on the corresponding month of 2019.

Despite healthy numbers, too, on the Far East-Europe and intra-Asia trades in the second half of the 2020, shipping association BIMCO noted how volumes on either trade remained in negative territory on an accumulated full-year basis, down by 5.3% and 1.3% respectively.

“BIMCO now expects global container volumes to have fallen by less than 1.5% in 2020 , which is far better than what we anticipated when the pandemic raged in the second quarter, although even this figure hides how profitable a year it has in fact been for container line companies,” said BIMCO chief shipping analyst Peter Sand.

“Strong capacity management when volumes fell allowed them to minimise their loses, and they have since been able to cash in on low bunker prices and record high spot freight rates on many trades as volumes have improved.”

Taking the latest monthly increase into account, global volumes through July-November last year tracked 4.3% above 2019 levels such has been the rebound since the coronavirus-induced slump. Volumes in the first half of 2020 were down by 5m teu, or 7.3%, such was the knock-on effect of the virus on box numbers. With reports of unwavering demand in December, supported by yet new spot rate highs most notably on the Asia-Europe and transpacific routings, this strong sentiment is expected to have continued throughout the second half of 2020.

In November, CTS also cited “notable developments” in its Global Price Index, measuring the change in the weighted monthly average teu freight rate on 2008 levels, which tends to be less volatile as it covers both spot and contract rates.

With the Global Price Index rising to 81 points in November, a rise of 15 points on its year ago level, this too represents its highest level since February 2015.

“A change of this magnitude at the global level bears witness to the huge pressures on supply chains as carriers do everything they can to meet not only record volumes but also demand for empty containers,” said CTS.

“Equipment has been in short supply on key trade back-haul routes that, even in normal circumstances, are imbalanced.”

On the headhaul transpacific trade, the CTS Price Index moved up 10 points to 119, however, high price indices on other routes reflect how the trend is spreading.

This includes both the Far East to Indian Sub-Continent & Middle East and Far East to Australasia & Oceania trades, which reported among the highest month-on-month rises, rising by 18 points to 110 and 106 points, respectively, according to CTS.

“Along with volumes, both trades’ indices have been veering upwards over the past couple of months, but November takes them to highs not seen since June 2012 in the case of the former, and not seen at all in the case of the latter, at least since we began reporting indices in January 2009,” added CTS.

Mr Sand said that, looking ahead, there will be a strong focus on the repositioning of empties to even out the imbalanced caused by the “stop-and-go demand of 2020”.

“Focus will now turn towards the Chinese New Year, which is set to be different to any other in terms of both celebrations and exports.”