Although the pandemic has left most of the global fleet at anchor, the Aponte-owned cruise operator is confident about prospects for 2021 and beyond

The commitment to fleet expansion will come as a huge relief to Europe’s shipyards, which continue to dominate this sector even though most containerships, tankers and bulkers are now built in Asia 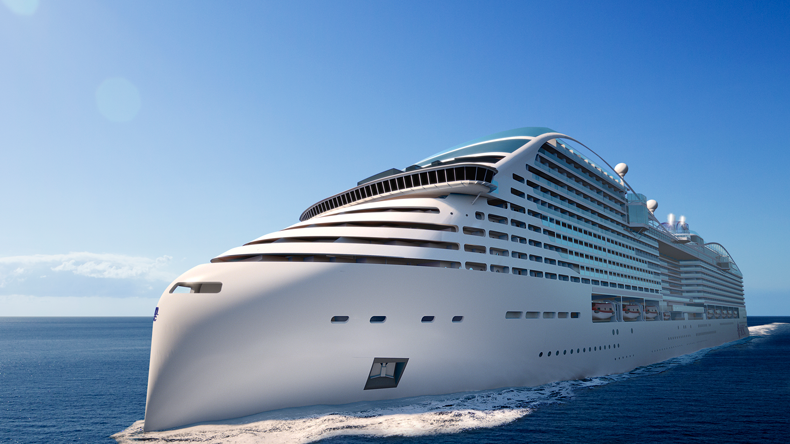 Source: MSC Cruises MSC World Europa is being built by Chantiers de l’Atlantique in France and will be powered by liquefied natural gas.

MSC Cruises is pressing ahead with its sizeable newbuilding programme, even though most of its fleet is currently at anchor.

The news will come as a relief to Europe’s shipbuilding industry that has seen much of its business lost to Asia during the past couple of decades. The company’s ships are built either by French or Italian shipyards.

Part of the Aponte family’s huge conglomerate, which also includes Mediterranean Shipping Co’s container shipping and terminals business, MSC Cruises is planning to expand its portfolio by another five cruiseships over the next four years.

That will bring its total fleet to 22 vessels by 2024, while there are options in place for more that are valid through to 2027.

Confirmation that its ordering schedule remains unchanged follows a torrid year for the whole cruise industry, which was forced to suspend operations as coronavirus infections spread. Several outbreaks were reported on cruiseships.

The world’s largest privately owned cruise operator had to anchor its fleet of 17 vessels in March, but now has two ships back in service, MSC Grandiosa and MSC Magnifica. Both have reduced passenger capacity to 70% of the usual level to achieve social distancing requirements.

Despite the pandemic, the company remains confident about prospects.

“Our plans for the future remain undiminished and our future bookings indicate there is a demand for cruises,” it said in a statement. “Our new shipbuilding programme is unchanged.”

Two vessels that are under construction at European yards, the 181,000 gt MSC Virtuosa, and MSC Seashore, are due to be completed in time for the 2021 summer season.

The former is being built by Chantiers de l’Atantique in St Nazaire, and the latter by Fincantieri. A sister ship to MSC Seashore will be completed by 2022.

Two further ships, to be powered by liquefied natural gas, are scheduled for delivery in 2022 and 2023, including the first of the World Class series, the 200,000 gt MSC World Europa.

Affirmation of its continued cruiseship newbuilding plans coincides with reports that MSC is also in talks with shipyards in China and South Korea about an order for six 23,000 teu containerships. It has declined to comment.

Delays in signing a firm order reflect financing issues, according to brokers. The world’s second-largest containership operator has also been active in the sale and purchase market in recent weeks.

MSC Cruises stated at the handover of the $900m MSC Meraviglia in 2017 that the ship was the first in a $10bn newbuilding programme that would virtually double its fleet size and consolidate its position as one of the leading players in this sector.

MSC Group chief executive Diego Aponte said at the ceremony that, despite the ambition of the cruiseship expansion plan, there was no intention of scaling back its container shipping interests.

The cruiseship industry looked set on non-stop expansion until the pandemic stalled the global economy. During 2020, while cruiseships have been left at anchor all over the world, container lines have performed well and are expected to produce good profits this year.

Of MSC Cruises’ 17-strong fleet, 15 are currently in warm lay-up in the Mediterranean, South America, the Caribbean, the US Gulf region and South Africa.

The goal is to bring these back into operation in the coming months as relevant approvals are obtained. MSC Cruises said the aim is to have 19 ships in service by summer 2021, including the two new arrivals.

The operator’s ships have been built either by France’s Chantiers de l’Atantique, or by Italy’s Fincantieri-Cantieri.

Export credit guarantees have been provided by both France and Italy which are understood to have given a moratorium on both capital and loan repayments during the pandemic.