Considering the cross-trading nature of the Greek fleet and the itinerant nature of the bulk tramping trades in which most owners are concentrated, the stability of their presence in many of the major trades from year to year can be surprising

Exclusive Lloyd’s List Intelligence data shows that Greek shipping is a powerful player in trades across the globe, whether it be serving the massive demand for dry bulk commodities and crude oil in Asia, or maintaining a major share of dry and wet tramp shipping calls in European ports 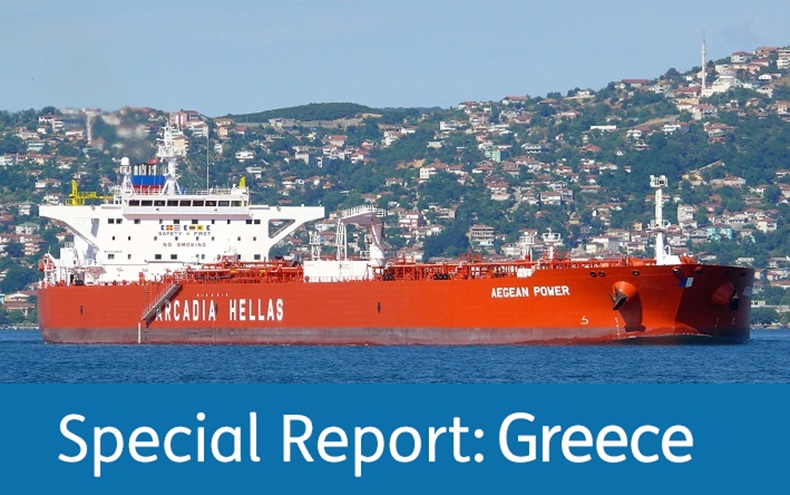 IN 2019, Greek-owned ships increased their activity — both globally and in most major regions — according to Lloyd’s List Intelligence data covering more than 230,000 port calls and aggregating more than 11.9bn dwt.

That was up from about 221,000 international calls, representing 11.3bn dwt, in 2018, reflecting trade patterns and demand but also an increase in the capacity of the fleet in the interim.

Greece’s own trade traditionally contributes less than 1% of the cargoes carried by Greek shipping companies in the course of a year.

Given the cross-trading nature of the fleet and the itinerant nature of the bulk tramping trades in which Greek owners are mostly concentrated, the stability of their presence in many of the major trades from year to year can be surprising.

Thus, for example, 633m dwt of Greek calls, of which 82% concerned dry bulk tonnage, are registered as having been made in Australasia last year, versus 632m dwt in 2018.

The Middle East was the only major shipping region to see less Greek-owned tonnage last year than the previous year, while activity to just about everywhere else increased.

Following the cargo has, for a long while, meant a steady increase in Greek shipping’s operations in Asia — and last year the region accounted for just over 35% of the fleet’s global port calls by aggregate capacity.

That closely shadows Asia’s share of global economic output, now considered to be around 40%.

In 2018, the steady growth of Greek tonnage calling in China suffered a minor blip as Chinese growth slowed.

However, last year, the overall trend reasserted itself and Greek owners more or less matched their peak year of 2017, racking up about 1.5bn dwt of port calls in China.

Yet if economic growth in Asia has been an increasingly powerful magnet for Greek shipping, its continuing importance as a servant of Europe’s economy and population was also underlined last year.

Lloyd’s List Intelligence data suggests that Greek-owned shipping lifted or delivered as much as 100m more tonnes of cargo in European ports in 2019 than the year before.

Altogether, last year saw well over 2.2bn dwt of Greek shipping port calls in Europe. Representing 18.6% of the fleet’s global activity, this was an increase from 2.1bn dwt in 2018, when European calls equated to 18.3% of Greek shipping activity.

Overall, 13.1% of all tonnage calling in ports around the world last year — across almost 5.4m port calls tracked by Lloyd’s List Intelligence — was identified as Greek-owned.

In many areas, though, Greek shipping’s presence comfortably exceeds this — and, unsurprisingly, this is true of a number of European sub-regions.

For example, Greek shipping represented 20.4% of the traffic in terms of capacity in Black Sea ports last year.

Other 2019 data indicative of a high market share for Greek-controlled tonnage includes 18.6% of capacity port calls in the eastern Mediterranean and 17.9% of port traffic by dwt in southern Europe.

Greek shipowners have long argued that the European Union should pay more heed to shipping’s role in serving external trade and they currently represent more than half of the capacity of the EU fleet.

Correspondingly, though, they retain a huge presence in other regions.

The total capacity of Greek-owned shipping calling in the Americas last year also rose, to nearly 2.55bn dwt — although this reflected 21.4% of the Greek-owned fleet’s aggregate capacity in port calls worldwide, a slight decrease from 2018.

The increase was fuelled mainly by greater cargo movement in South America, which has outstripped North America as a destination for Greek tonnage.

For the Greek-owned dry bulk fleet, Asia remained overwhelmingly the most important destination in 2019, with calls to the China Sea sub-region increased to about 1.17bn dwt.

The Asean region of Southeast Asia – including Cambodia, Indonesia, Malaysia, the Philippines, Singapore, Thailand and Vietnam – remained the second-busiest destination for Greek tonnage, despite dipping slightly to 573m dwt of calls.

Much of the cargo came from South America and Australasia, which ranked the third- and fourth-most important regions for Greek bulkers, with 12.1% and 10.8%, respectively, of global calls by tonnage.

Altogether, Asia saw a staggering 44.5% of Greek bulker tonnage calling worldwide, with the Americas attracting 19.7% of tonnage and European ports in third place, with 11.8%.

Some 934m dwt of Greek-owned dry bulk capacity called in China in 2019, although this was a relatively modest 12.3% of all bulker traffic in Chinese ports.

The country’s dry bulk trade is dominated by Chinese owners, whose ships represented 54% of the bulker calls last year by number and 43% by capacity.

India is a far from negligible destination for dry bulk, ranking fifth last year in terms of calls by Greek-owned bulker tonnage.

An aggregate of 291m dwt of Greek-owned oil tankers called in the country’s ports, representing 20.7% of total traffic, compared with about 264m dwt of Chinese-owned tankers.

A feature of Greek-owned shipping is the significantly larger ships that Greeks, on average, own in comparison with worldwide norms.

In the crude trade serving China, the disparity is particularly marked, with the average Greek call last year being by a vessel of 228,988 dwt, hinting at a fairly even split between very large crude carriers and suezmaxes.

By contrast, the average Chinese-owned tanker calling in the country’s ports was 126,916 dwt.

Overall, Asia was the top destination for Greek crude tankers, with 29.6% of tonnage calls. Meanwhile, 823m dwt called in the Americas and 809m dwt was logged at European ports, representing 21.2% and 20.8% of Greek crude activity, respectively.

In terms of specific sub-regions, however, the Middle East Gulf saw the greatest amount of Greek-owned crude capacity, with an aggregate of about 670m dwt lifting crude cargoes from the region.

Greek product tanker trading is focused more on the Atlantic Basin than the Pacific and last year saw a sharp increase in tonnage calling in the US Gulf and in North America overall.

Despite a reduction in calls to South America, the Americas represented one third of global Greek product tanker calls by tonnage, easily the most of any region.

Significant increases of Greek calls in the Black Sea and the eastern Mediterranean contributed towards an aggregate of 218m dwt of Greek product tanker calls in Europe.

That was enough to make Europe the second-most important destination for the Greek-owned products fleet, with 23.3% of their global footprint.

Asia attracted 178m dwt of Greek product tanker calls in 2019 and was the third-most important major region for the fleet in this sector. That was mostly due to the Association of Southeast Asian Nations region, which ranks fourth in terms of sub-regions, with 19% of all Greek product tanker movements by tonnage.

This article is part of a special report on the Greek shipping sector, which will be published online this week. The report is also available now to subscribers via the Lloyd's List magazine — click here to read the latest edition