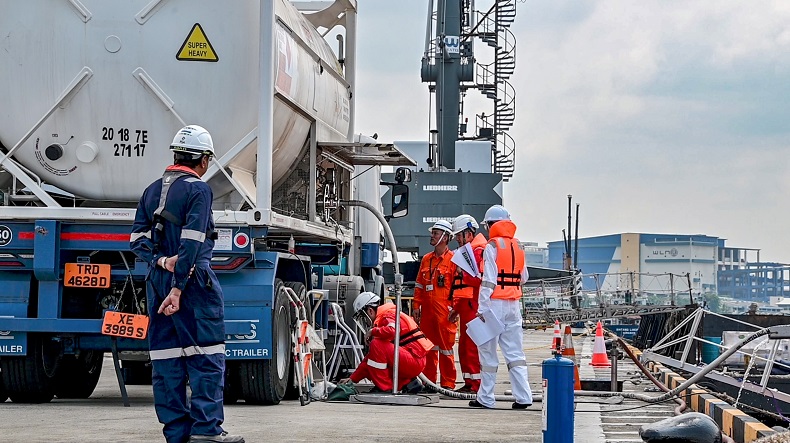 Most of Singapore-based Pavilion Energy's bunker volumes are now delivered using truck-to-ship transfers but this is looks set to change once its charter-in 12,000 cu m bunker tanker comes online next year.

The two parties have signed a memorandum of understanding outlining their intent to collaborate by pooling bunkering resources to refuel ships serving long-haul, East-West sea trades.

Next year, Pavilion Energy is set to bring online the first tanker it has hired on a long-term charter to deliver ship-to-ship LNG bunkering out of Singapore, the world’s busiest bunkering hub.

“This partnership underlines our aim to build a world-wide partner network,” chief executive Johanna Lamminen said. “For our customers this mean that we will support them with LNG wherever they are.”

“Our network will combine global commercial offerings with regional operational expertise and bring further momentum to the emergence of a thriving LNG bunkering industry,” he said.

The Gasum alliance is one of several building blocks backing Pavilion Energy's bid to resolve ‘chicken-and-egg’ concerns commonly seen as holding back the growth of global LNG bunker trade.

Some in the industry have questioned the viability of investing in LNG-fueled ocean-going tonnage given the lack of visibility until recently, over the availability of ship-to-ship transfer infrastructure needed to bunker these vessels.

In turn, a reluctance to invest in such shipping tonnage will not have encouraged investor interest in the required bunkering infrastructure.

Pavilion Energy has defied such conventional wisdom by committing to back the construction of a 12,000 cu m LNG bunker vessel, with the aim of having it ready by next year.

This also positions the LNG-focused player as one of only two players licensed to operate in Singapore, to bunker the world’s first ocean-going LNG-fueled container ships.

France’s CMA CGM has already taken delivery of the first in a series of 23,000-teu container ships equipped to run on LNG. It has committed to bringing online easily over a dozen more such vessels in the next few years.

“We envisage that some of these CMA CGM vessels will be bunkered in Singapore as early as 2021,” said Alan Heng, managing director for Asia region at Pavilion.

This signals a major thumbs-up for LNG bunker trade gaining significant traction, considering as Mr Heng has highlighted during his presentation, that just over 500 vessels worldwide are capable or ready to run on LNG.

He pointed to one projection suggesting exponential growth to a 8,000-strong LNG-fueled fleet by 2030.

That would equate to a 30-fold expansion in marine LNG demand to over 20 m tonnes each year.

Pavilion Energy expects Singapore, as a leading bunkering port, to command a 20% share of this growing market.

In seeking to fulfill the promise of the still nascent industry, the Singapore-based LNG player is looking for more tie-ups with like-minded partners such as Gasum.

That is also expected to pave the way for the industry at large to scale up soon enough to serve international shipping.

Mr Heng cited data that shows just 15 ports are now capable of performing ship-to-ship bunkering worldwide, with another 15 joining in the coming years.

Pavilion Energy is now looking for collaboration opportunities in China and South Korea, where it has held talks with potential partners.

The aim, as Mr Heng puts it, is to bring LNG to “where the customers are”.