Two huge explosions in the port area of Beirut, Lebanon, have killed at least 100 people and wounded more than 4,000 — explosions so powerful they were heard in Cyprus

According to Lloyd’s List Intelligence, seven vessels were in port at the time of the blast. Local reports suggest significant damage to port infrastructure in a 5km blast zone 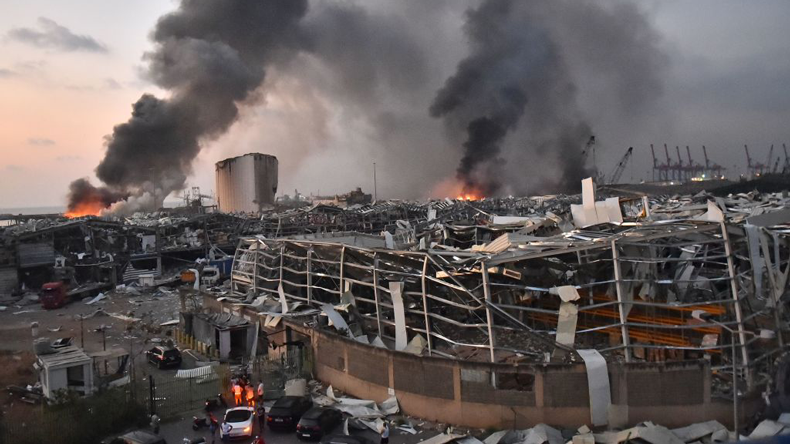 Source: STR/AFP via Getty Images The scene shortly after the explosions in Beirut.

AT least 100 people have been killed and 4,000 injured after two massive explosions in the port area of Beirut which rocked the Lebanon capital and were so powerful they were heard in Cyprus.

Social media footage of yesterday's explosion showed a column of smoke rising from the port followed by an enormous blast which sent a fireball into the sky.

According to shipping agency GAC, the explosion and the subsequent blast in Beirut destroyed almost everything in the port and the surrounding area up to a radius of 10 km and was equal to a 4.5 magnitude earthquake.

President Michel Aoun said 2,750 tonnes of ammonium nitrate had been stored unsafely in a warehouse for six years. He has called an emergency cabinet meeting today.

The head of Lebanon’s Red Cross, George Kettani, said at least 100 people had been killed. “We are still sweeping the area. There could still be victims. I hope not,” he said.

"I will not rest until we find the person responsible for what happened, to hold him accountable and impose the most severe penalties," Prime Minister Hassan Diab said.

Mr Diab said it was "unacceptable" that a shipment of ammonium nitrate estimated at 2,750 tonnes had been in warehouse for six years without "preventive measures" in place to protect it.

A civil defence official said his staff had evacuated dozens of people to hospitals and that there were still bodies inside the port, many of them under debris. Many people are said to be unaccounted for.

Media reports said an Africa-bound ship carrying the ammonium nitrate had been impounded at Beirut port in late 2013. A law firm prosecuting the case said that the cargo had been unloaded into a port warehouse, the Financial Times reported.

Lebanon's internal security chief Maj. Gen. Abbas Ibrahim said the blasts occurred in a section of the port housing highly-explosive materials and that it was ``not possible to pre-empt investigations and say that there was a terrorist act." 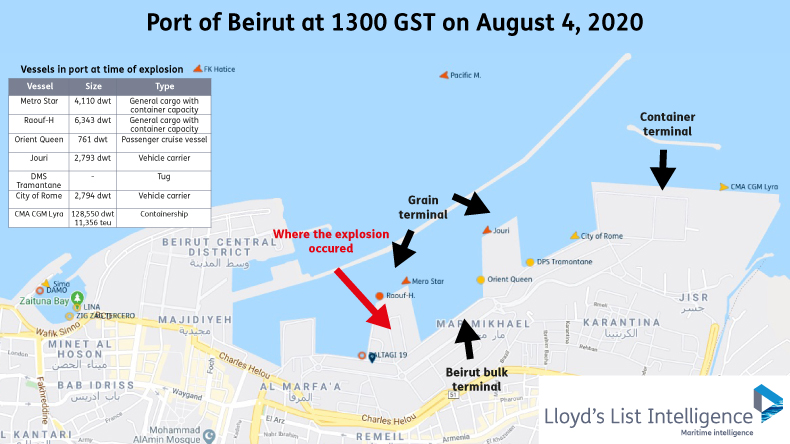 According to Lloyd’s List Intelligence, seven vessels were in port, the largest being the Malta-flagged CMA CGM Lyra, an 11,356 teu containership, and the Panama-flagged Duke I, a 39,999 dwt chemical tanker.

The United Nations Interim Force in Lebanon said one of its ships in the Maritime Task Force docked in the port was damaged, injuring naval peacekeepers, some of them seriously.

It said it transported the injured peacekeepers to the nearest hospitals for medical treatment.

Maritime security consultancy Dryad Global has reported that “vessels and buildings within a 5km radius of the blast are believed to have been almost entirely destroyed”, however Lloyd’s list has not yet been able to independently verify any details of vessel damage.

"Due to proximal location, and local reporting of other fatalities, it would be unlikely if the port location did not experience significant casualties," reported Dryad.

The general cargo vessel Raouf H (IMO: 8325535) was the closest commercial vessel to the reported epicentre of the explosion near the Beirut Port silos.

The Sierra Leone flagged general cargo vessel Mero Star (IMO: 8321682) was berthed at the east end of the dock. Three local pilot tugs were also in close proximity to the explosion.

Dryad reports local sources stating that almost all of the port logistical infrastructure has been destroyed. The status of vessels alongside remains unknown.

The blasts destroyed wheat in the port’s granaries. Lebanon imports about 90% of its wheat, mostly through the destroyed port. The port granaries held about 85% of the country’s cereals, accordingh to reports.

Maersk confirmed that its Beirut office building had been damaged by the explosion. Three employees who were inside the office suffered minor injuries. They were taken to hospital but later  discharged and sent home.

All staff are accounted for and have been instructed to remain working from home, Maersk said in a statement. The Danish company did not have any vessels near the port at the time of the blast.

Hapag-Lloyd said its agent’s office had been completely destroyed, but all staff are safe. The German line, which had no ships in the area, is now drawing up contingency plans for service operations.

GAC said its office building at the entrance of the port has been severely damaged but staff are still able to receive emails.

Dozens of ambulances ferried the injured from the port area, where the wounded lay on the ground, Associated Press staff at the scene said. Army helicopters helped battle fires raging at the port.

Video taken by residents showed a fire raging at the port, sending up a giant column of smoke, illuminated by flashes of what appear to be fireworks. Local TV stations reported that a fireworks warehouse was involved.

Residential areas in the immediate area of the blast in north Beirut have been devastated, video footage shows, with balconies collapsed and cars destroyed.

The explosion comes in the same week that a jury will deliver a verdict on the assassination of former prime minister Rafiq Hariri, who was killed in a massive car bomb in 2005 that also shook the city.

The blast also comes as Lebanon is still reeling from its worst economic crisis in decades and its hospitals are trying to cope with rising number of coronavirus cases.

We are very moved by the devastating images of #Beirut and its port. In this new ordeal for #Lebanon, we are wholeheartedly with all our staff members on site and the Lebanese people. We will be by your side. @cmacgm