With foreign crew finally being permitted to the beaches again, scrap deals were close to the total number of sales in the past three months in the Indian subcontinent region. However, a fall in demolition rates might cut short the string of scrapping candidates

As restrictions on foreign crews’ disembarkation were eased in Alang, the market for older ships has come to life 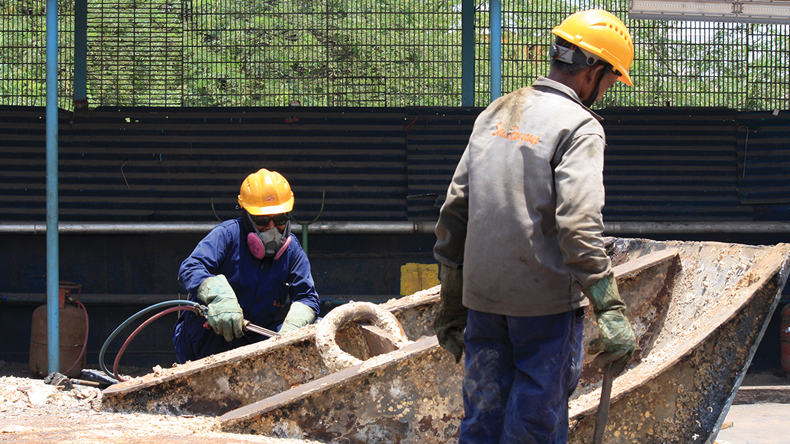 Some owners still appear keen to sell their vintage tonnage, even at lower rates, according to a Singapore-based shipbroker.

A SURGE in scrapping sales has been reported from the Indian subcontinent over the past week, as the market for old ships comes back to life following the extensive lockdowns.

With foreign crews finally being permitted to the beaches again, scrap deals were close to the total number of sales in the past three months.

Although Indian crews could disembark from Indian ports three weeks ago, ships for scrap were unable to call at Indian ship recycling yards as the foreign crews in these vessels were not allowed to disembark in view of the travel restrictions imposed by the government.

India’s Directorate General of Shipping has now agreed to a new set of controlled crew-change protocols for sign-off and repatriation of seafarers on ships heading for scrapping in Alang.

The move follows a call from the local Ship Recycling Industries Association requesting the directorate to allow foreign crew to sign off the ships in Alang to take advantage of the high number of ships looking for demolition due to the virus outbreak which has resulted in steep decline in demolition prices.

“This was the much needed step as quite a few vessels were waiting with foreign crew for beaching and this will ultimately ensure further supply of vessels,” said GMS’ Alang-based lead co-ordinator for responsible ship recycling Anand Hiremath.

“On the other hand, if this supply becomes greater than demand, then the price of vessels will further fall.”

He noted that demand is already starting to become stretched due to huge volumes of tonnage on the market and the sharp drop in freight rates.

Average prices in the different markets last week ranged for tankers between $160-$305 per ldt and those for dry bulk units between $150- $285 per ldt.

Lesser number of vessels went for scrap as Indian crew could not leave for take over of “as is where is” vessels and foreign crew were not allowed to get off in Alang for beaching, Mr Hiremath said. “Even transit visas were suspended.”

However, as international flights still remain suspended, foreign crew have to stay in a hotel until flights resume or arrangements for chartered flights have been done.

Despite the volatile nature of the market, some owners still appeared keen to sell their vintage tonnage, even at lower rates, according to a Singapore-based shipbroker.

Bangladeshi buyers have also entered the fray, with some increasingly competitive pricing, while Pakistan was lost out to others last week, he said.