Vessel-tracking analysis from Lloyd's List Intelligence shows the tankers all had gaps in their Automatic Identification System. The collision-avoidance tool must be on at all times under international conventions except when the vessel needs to switch it off for safety reasons 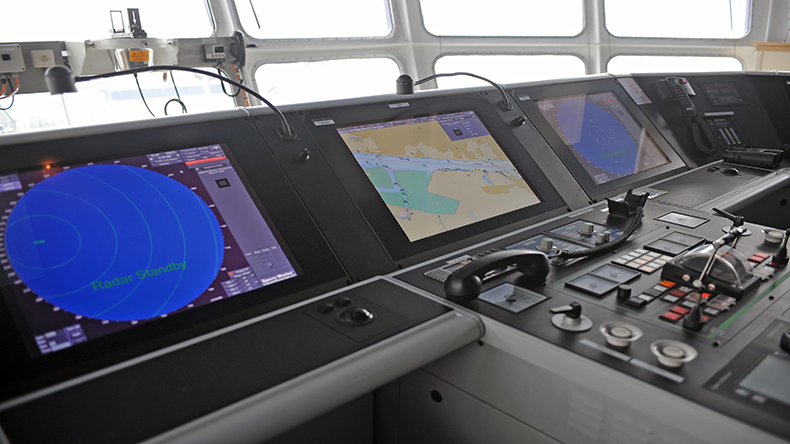 AIS gaps or “going dark” were listed as signs that service providers should detect and investigate.

ALL four tankers placed under US sanctions earlier this week due to links with Venezuelan oil shipments had irregular AIS transmission or trading patterns during the past two months — signalling the Trump administration is following up on threats to punish those owners and operators engaged in shipping practices it labels as deceptive.

The Bahamas-flagged Seahero’s technical, ISM manager and commercial operator is Thenamaris Ships Management, according to the Lloyd’s List Intelligence database.

The Malta-flagged, 2017-built Chios I lists Dynacom Tankers Management as both technical and ISM manager, while the Marshall Islands-flagged VLCC Voyager I is commercially operated by NGM Energy, linked to the Nicolas Moundreas Group of Companies.

The Panama-flagged Athens Voyager is commercially operated by Chemnav Shipmanagement Ltd, linked to the Coronis family.

The Marshall Islands registry has already signalled it will begin to deregister the 2003-built Voyager I. 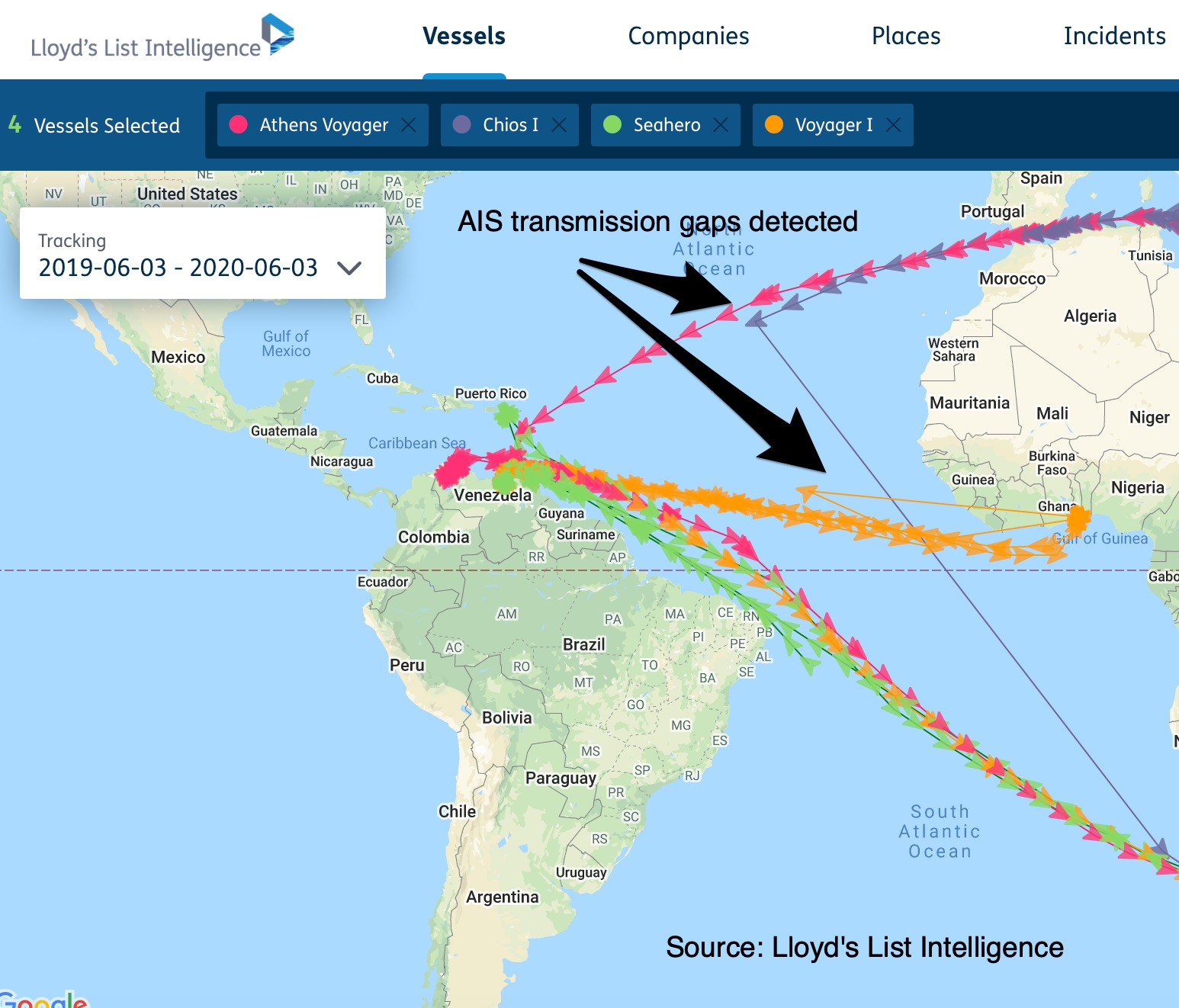 Vessel-tracking analysis from Lloyd's List Intelligence shows the tankers all had gaps in their Automatic Identification System, which transmits the location and identify of the tanker. The collision-avoidance tool must be on at all times under international conventions except when the vessel needs to switch it off for safety reasons.

Chios I, entered with Standard Steamship P&I, transmitted no AIS signal between February 4 and March 10, with its trajectory showing it was on track to call at Venezuela in mid-February.

When the vessel reappeared, signalling it was laden, it then sailed through the Singapore Strait and headed to Indonesian waters off Balikpapen. Its AIS transmission was off for a further three-day period from April 15, with its draft afterwards transmitted at a level that it had discharged its cargo, likely as a ship-to-ship transfer during that gap.

Voyager I had AIS gaps while it shipped Venezuelan crude to offshore Lome, in West Africa, a known storage and STS transfer area for marketing the South American country’s crude.

The vessel is now laden and offshore at anchor off Malaysia’s western coast, where other tankers with unsold Venezuelan crude have been tracked for STS transfers during the past 12 months.

Voyager I and Seahero also were tracked briefly deviating to Trinidad & Tobago waters, either before or after calling at Venezuela. Other tankers have deviated here since unilateral US sanctions were placed on Venezuela’s oil and shipping industry in February 2019 with false bills of lading issued to obfuscate cargo origin.

Seahero appeared to have loaded at the US Virgin Islands on May 29 based on its vessel tracking history. The vessel has been engaged in shipping Venezuelan crude to Singapore or Malaysia and back since at least February 2020. AIS is not available beyond this date.

There is no suggestion that any of the tankers sanctioned by Ofac were engaged in deceptive or illicit shipping practices to evade sanctions.

AIS gaps or “going dark”, as well as false cargo and vessel documentation, irregular voyages and STS transfers were listed in administration guidance issued on May 14 as signs that service providers should detect and investigate.

Shipowners, operators, flag registries, charterers and banks were all targeted in the advisory, issued by the State Department, Treasury Department and US Coast Guard.

Ofac’s latest move is the first sign that the US will more aggressively target international shipping of Venezuelan crude, placing flag states, marine insurers and others connected with sanctioned vessels on notice.

North P&I, in which Voyager I and Seahero are entered, said in a statement that “in conjunction with our advisers we are assessing the implications of these designations”. 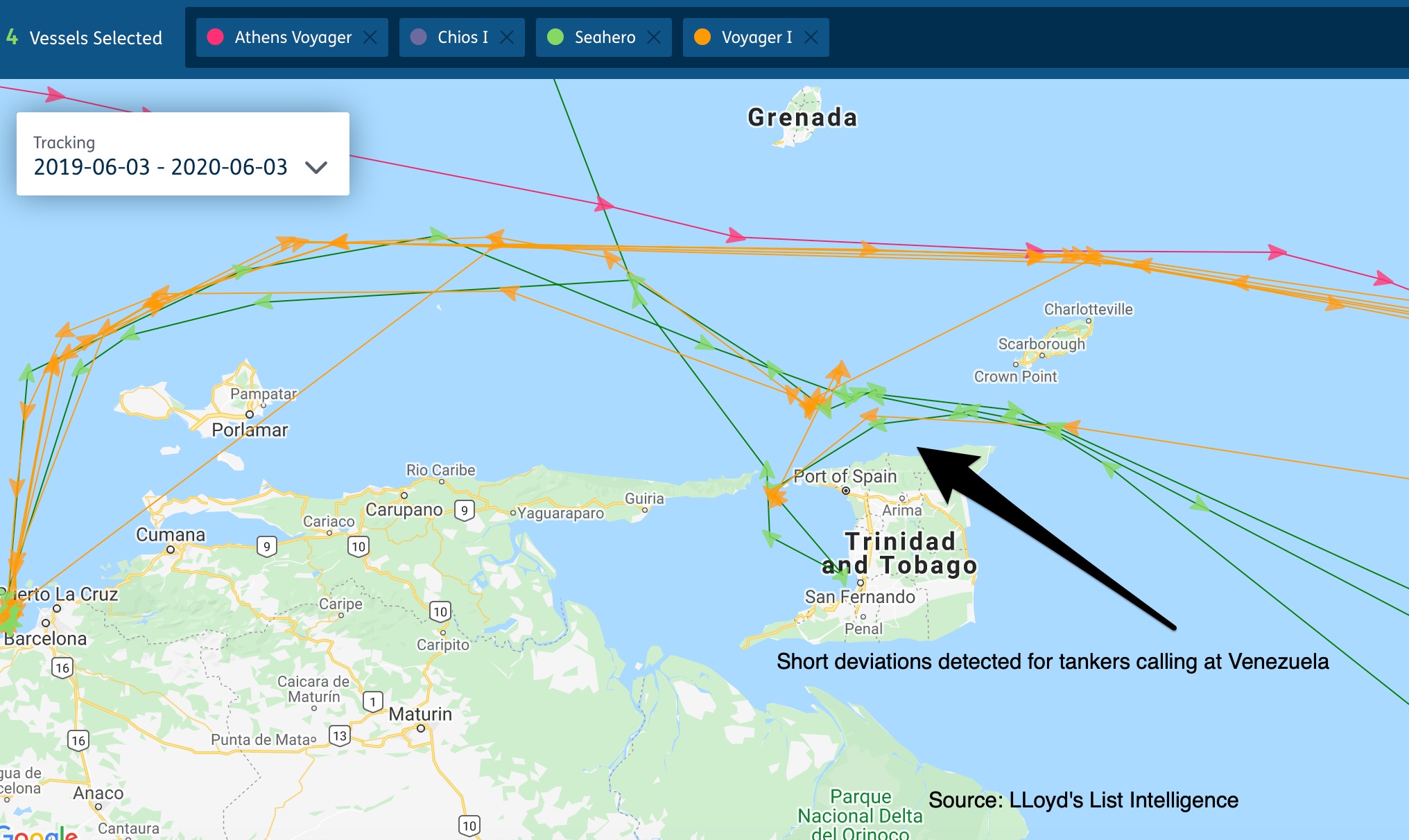 Liabilities that arose out of voyages that breached applicable sanctions were excluded from cover by clubs that were members of the International Group of P&I clubs, the statement said.

The Standard Club and London P&I, which have Chios I and Athens Voyager respectively entered with them, did not respond for emailed requests for comment.

The actions of the Bahamas, Malta and Panama flag administrations will be closely watched to see whether they will match the Marshall Islands registry’s response and deregister the tankers.

Panama pledged earlier this week in a marine circular it would fine vessels up to $10,000 or deregister those that deliberately tampered with AIS or Long Range Identification and Tracking equipment.

Bahamas and Malta flag administration did not respond to emailed requests for comment.

The Greek owners and operators did also not responded to call requesting a response or comment.

Greek owners dominate loadings of Venezuelan crude even as US sanctions have paralysed export trade and slashed volumes to one-fifth of levels seen two years ago.

Some 161 tankers have been tracked loading Venezuela crude over the past 12 months according to Lloyd’s List Intelligence. Of these a total of 126 have Greek companies listed as their beneficial owners, data shows. Last October several oil companies added clauses to charters saying they would not hire tankers that had called at Venezuela in the previous 12 months.

Shipping sanctions ambiguity to extend beyond US election