Collapse of demand for new vehicles bodes ill for shipping

A slight recovery in car sales is forecast for 2021, but not enough to compensate for the shock to the market this year 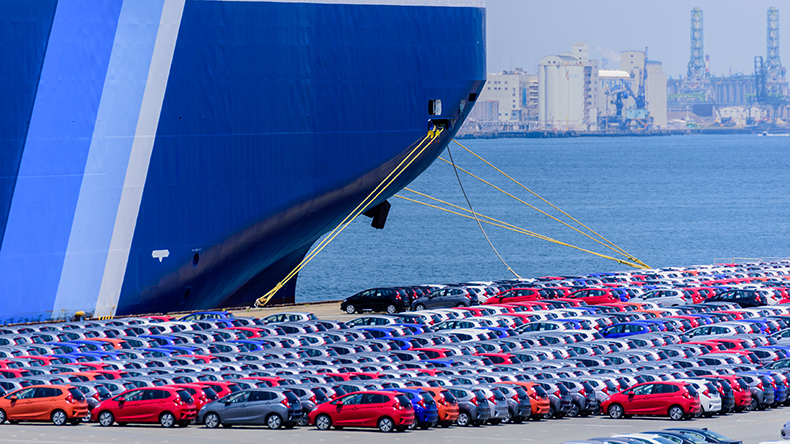 Source: CAPTAINHOOK/Shutterstock.com Auto exports declined 20.7% year on year in the first quarter of 2020.

SHIPOWNERS specialising in the transportation of vehicles are facing a crisis with global car sales demand forecast to fall 21.8%.

LMC Automotive, a vehicle industry forecaster, predicts demand to drop to 70.6m units from 90.3m last year. Demand in Europe is set to decline 26.5% to 15m units, while in South America it will fall by 43.9%, according to the forecast.

“Volume spikes upward 34.8% in 2021 to 3.1m units, but with share climbing only partially back to where it was in 2019 to 3.8%,” said Mr Stoddard. Most demand in South America comes from Brazil, which like Mexico has been criticised for its handling of the virus, he added.

In the UK, new car registrations fell 44.4% in March, when 203,370 fewer cars were sold, according to the Society of Motor Manufacturers and Traders.

In April, demand for new cars fell by around 97%, when 4,000 new cars were registered in the month compared with 161,000 in the same period a year earlier, according to SMMT.

The falls in demand are bad news for the cluster of shipping companies that carry the world’s cars.

Scandinavian giant Wallenius Wilhelmsen, which last week posted a $285m quarterly loss, said it expects ocean volumes to fall by half in the second quarter of 2020.

Auto exports declined 20.7% year on year in the first quarter of 2020 and all markets lost significant sales volume, Wallenius Wilhelmsen said in its first quarter of the year earnings announcement. North American sales were down 5% year on year, and 11% on the past quarter, as the US was slower to respond to the virus than Asia and Europe.

Sales in Europe dropped 16.8% year on year, which also reflected changes to emission testing standards and uncertainty over Brexit and diesel vehicles. Chinese light vehicle sales had the biggest fall, down 42.1%, or 50% on the previous quarter.

Exports out of North America were down 14.3% year on year, Wallenius Wilhelmsen reported, reflecting the earlier hit to Asian and European markets. Japanese first quarter of the year exports declined 13.4% year on year.

Wallenius Wilhelmsen also flagged declining exports in the high and heavy trade, with exports of construction and rolling mining equipment down 12% year on year — North America by 25%, and Asia by 9%.

The company said analysts expected global sales by important construction equipment manufacturers to decline 16% in 2020, before rebounding 6% and 4% in 2021 and 2022.

Imports to Australia fell 27% year on year, while the Eurozone construction Purchasing Managers Index “fell to levels not seen in over a decade”.

But Mr Stoddard, citing the LMC Automotive forecast, said Europe and South America would record the biggest recoveries in demand by region, with global volume rising 15.6% from 2020.

“The rebounds in China and South Korea are expected to be sharper than most countries due to their apparent success in containing the spread of the virus,” said Mr Stoddard, adding that Japan’s market was not hit as hard as most others.

“Asia-Pacific region is expected to fare better in 2020 than the other major regions. If not for India, the year-over-year demand in the region would look much better.”

Shipmanagers adapt to the new normal, some of it for the better