‘We only sold ships because the offers were good, not purely to raise money to pay debts,’ says SS Teo of PIL

Responding to speculation about the company, PIL has issued a statement challenging ‘rumours’ and ‘false claims’ about a ‘potential bankruptcy’ 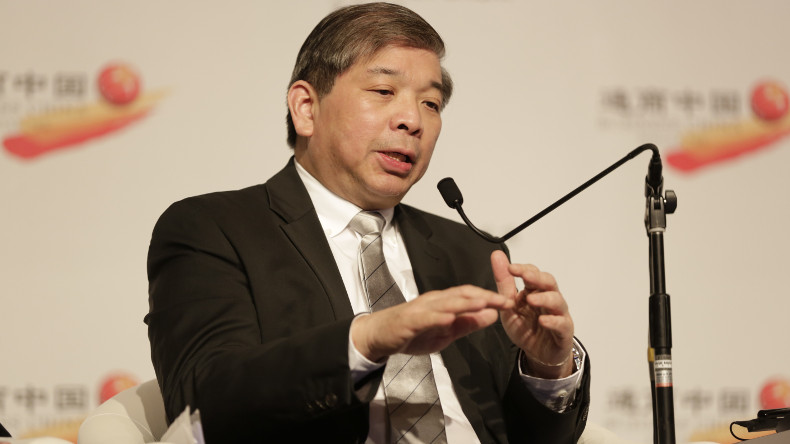 Teo: Pointed out that the sale of six 12,000 teu boxships to Seaspan and Wan Hai, which was announced in March, was priced at “above book valuations”.

THE slew of divestment deals in recent months that have seen Pacific International Lines pocket $1bn were not fuelled by a need to trim down debt, but rather by a desire to rationalise the family-owned portfolio in the light of unfolding unfavourable macroeconomic forces, according to executive chairman SS Teo.

PIL — the largest family-run boxship company based in Singapore — has sold factories run by its Hong Kong-listed subsidiary, Singamas It has also sold its controlling stake in Pacific Direct Line and over a dozen vessels over the past 16 months.

In total, it has raised $1bn in gross proceeds. While Mr Teo acknowledged some of this would go to paying down outstanding debt, he maintained that these deals were not done under financial duress.

The second-generation PIL successor was clearly keen to address months-long concerns surfacing in the media about the financial health of his family business empire.

PIL has allegedly chalked up large bunker bills, leading up to the arrest of a vessel on its fleet in January by one affected supplier. The market has come to link its recent divestments and troubled relations with bunker suppliers with a developing cash crunch.

The speculation around the company prompted it to take the unusual step this week to issue a statement challenging “rumours” and  “false claims” about a “potential bankruptcy”.

“PIL would like to clarify that these rumours are totally false and the information and content derived therefrom are unfounded,” it said.

It said that it and its subsidiaries in China “have fully resumed operations” and that the company “has been making steady progress and is currently actively preparing for a strong rebound after the epidemic.”

It added: “In the face of an increasingly complex and uncertain global market environment, PIL has remained resilient by embarking on a service rationalisation which will focus our efforts on key liner markets in Asia, the Middle East, Africa, Oceania and South America.

“Our strategic business integration has enabled us to be well-positioned in capturing market opportunities brought about by the Belt and Road Initiative), and moving forward, PIL will continue to strengthen our leading position in the North-South routes.”

Mr Teo said that the sale of six firm 12,000 teu boxships to Seaspan and Wan Hai unveiled in March priced the vessels at “above book valuations”.

“We only sold ships because the offers were good, not purely to raise money to pay debts,” he told Lloyd’s List in an interview.

Seaspan and Wan Hai disclosures suggested the deals priced each ship at over $90m apiece, higher compared with the average newbuilding cost PIL commissioned with shipbuilder Yangzijiang back in 2015.

Judging by these numbers, Seaspan and Wan Hai seem to have paid fair prices for the acquired boxships.

Including these vessels, PIL has sold seven of a dozen of 12,000 teu series of ships delivered from YZJ plus three others this year. This followed on from the sale of about half a dozen smaller vessels the year before.

Mr Teo explained that a decision was made to withdraw from the Transpacific trade early this year, leading to the sale of tonnage — including some 12,000 teu units — plying this East-West trade.

“These ships were previously earmarked for joint TP services with Cosco but they became surplus tonnage when we decided to exit TP trade.”

PIL first started reviewing its services last June when a protracted trade spat between the US and China was seen escalating.

Mr Teo noted that the retaliatory trade tariffs between the two superpowers had resulted in cancellations of transpacific shipments.

Some trade volumes also shifted to Vietnam and shipping rates on this major trade fell short of matching expectations.

“We believe the north-south and south-south trades would be more robust compared to the long-haul transpacific and Asia-Europe trades,” Mr Teo said.

PIL has retained five 12,000 teu ships, four of these are still trading in the Red Sea and one other plying services lined for Africa.

It has likewise elected to let go of a 60% stake in PDL for a good price to Neptune Pacific Line, which now holds 40% of the business venture.

As for the sale of Singamas’ factories to Cosco, he suggested that it no longer pays for PIL to carry on with the box manufacturing business.

“Margins for manufacturing have been low and demand for new containers is very volatile and subject to fluctuations in trade volume.

“It is getting tougher for foreign players like us to keep manufacturing businesses going in China as the country is tightening environmental and labour laws.”

But the sale of these businesses to Cosco pegged at Yuan3.8bn (now $540m) stood out for booking a loss on disposal of about $15m.

Mr Teo described this as “a one-off loss” partly accruing from exchange rate conversion between the US dollar and Chinese yuan.

He also sought to distance the Singamas deal from the close ties between PIL and Cosco, arguing that it was a commercial decision for a listed entity that would come to benefit the industry at large.

“Cosco is a serious and responsible player — they bought the factories and kept them running thereafter.

“They can choose to build new factories rather than acquire existing ones but that would have tripped up the industry with excess capacity building.”

PIL has long been rumoured to be an acquisition target for the much larger, state-owned Cosco group.

Mr Teo reiterated that PIL is not for sale.

But sceptics have questioned whether PIL, with its highly leveraged balance sheet, can realistically interest decent suitors.

PIL has advised that it expects to lower its gearing — defined as net debt to earnings before interest, taxes and amortisation — to seven times on paying down debts with the proceeds drawn from the divestments since early 2018.

The shipping group had more than $4.9bn of liabilities and in excess of $351m cash and short-term deposits on its books as of June 30 last year.

It owed more than $680m to trade creditors and run up almost $1.14m in financial leases before the sale of the seven 12,000 teu container ships.

PIL’s trade credit woes have piled up when “bunker prices shot up dramatically” at the start of this year, causing the group to “exhaust” credit limits and chalk up outstanding bills, Mr Teo said.

One bunker supplier went to seek a court order to arrest PIL’s vessels, but he maintained that the court papers “were not served on us before the ship arrest”.

“The ship was also released within 24 hours from its arrest,” he said.