Coronavirus is delivering a severe shock to the US supply chain, as the latest figures for Long Beach and LA show, while China is on course to strengthen its position as the world’s biggest shipbuilder 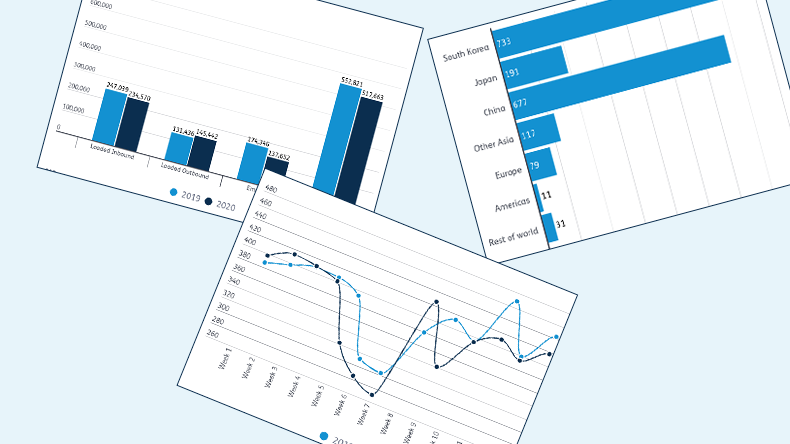 CONTAINER trade at the major US west coast ports of Long Beach and Los Angeles was significantly down in March compared to a year ago.

Port of Long Beach executive director Mario Cordero said the coronavirus outbreak was “delivering a shock” to the supply chain that continues to ripple across the US national economy.

Even though factories in China are beginning to produce more, volumes remain “soft” as US retailers and cargo owners are scaling back orders, according to Port of Los Angeles executive director Gene Seroka.

The National Retail Federation projected this week that imports at major US retail container ports would remain “significantly” below normal for the next few months at least with vice-president for supply chain and customs policy Jonathan Gold pointing out that many US stores are closed and consumer demand has been hit, with many Americans out of work.

Hackett Associates founder Ben Hackett said the coronavirus pandemic is “unravelling the economy nationally and globally” as most of the world moves towards a lockdown entailing closure of significant portions of the service and manufacturing industries.

Those views were underscored by Alphaliner, which this week reported that more than 250 scheduled sailings will be withdrawn around the globe in the second quarter alone, as carriers react to “rapidly fading” demand.

It reported that a “fresh round of blanked sailings” is set to hit the market from April, as carriers have announced capacity withdrawals of up to 30% for various routes, including the transpacific.

For China, figures from Lloyd’s List Intelligence show that vessels movements at the leading container hubs of Shanghai and Yangshan have yet to show any slowdown.

Despite a swathe of blankings being announced by carriers, and more than 200 sailings being cancelled, the number of container-related vessel calls at the major container hubs are again tracking figures seen this time last year.

The figures, which record port calls by containerships, general cargo vessels with container capacity, con-ro vessels and container barges, showed a dip in week 14, as they would normally as the sector heads into the slower summer months.

But despite the current collapse in demand, the figures remain slightly higher than they were in the corresponding week in 2019, indicating export activity from China remains high.

Also from Lloyd’s List Intelligence this week, China is on course this year to claim its biggest share of global shipbuilding output since 2013.

The latest Shipbuilding Outlook for April pegs total shipbuilding output at 122m dwt this year, up 24m dwt from 2019. However, Lloyd’s List understands that total figure will be reduced to 100m dwt, as things stand, for the May update as Covid-19 further impacts the market.

The global orderbook, as it stood at the end of March and prior to the later update, is for 6,397 vessels. China also dominates this list with 2,658 vessels in total although this is down 2% on last year.

The country’s orderbook is dominated by bulkers with 1,136 ships, along with 667 tankers and 463 container and ro-ro ships.

The total number of vessels on order at China’s shipyards is twice that of the second- and third-placed regions. Europe has overtaken South Korea to have the second-biggest orderbook with 1,127 vessels, compared with 996 vessels in the Asian country.

Cancelled sailings cause 6.9% drop in throughput for Long Beach