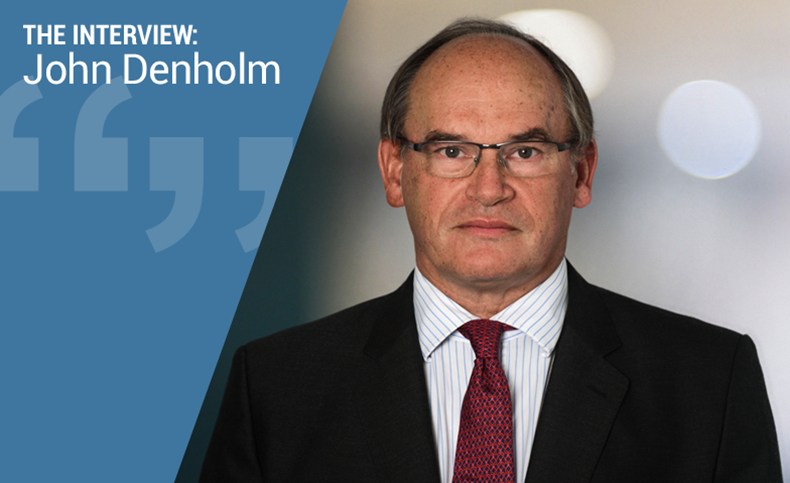 And this will be the main goal of one of Britain’s few remaining traditional domestic shipowners in his coming year as president of the Chamber of Shipping.

John Denholm takes the post as he prepares to hand over the reins as chief executive of his family-owned Denholm Group, now a diversified business following the demerger of its oil division.

On the shipping side, it remains active in the dry bulk market, and is the main shareholder in Hong Kong-based Anglo-Eastern Univan, one of the world’s largest ship managers. It also has interests in industrial services, fishing and logistics.

His immediate in-box will be dominated by the big headline-grabbing issues of the moment, at least in the first instance.

For a start, there is Brexit, which is still by no means ‘done’. It’s increasingly clear that our borders will be nowhere near as frictionless as the industry had been hoping.

Then there is a coronavirus, something that has come to the fore in the period between when this interview was conducted and its time of publication. Decarbonisation is another massive challenge.

But the big prize, he believes, is the one-off post-Brexit opportunity to reshape the business environment in a manner that could transform the UK into the go-to place for shipping companies.

That’s a huge challenge. Piraeus and Oslo remain Europe’s big shipping clusters, and Vancouver and Singapore both dangle tantalising incentives before the footloose. But Mr Denholm is unabashed.

“Actually, the business and fiscal environment here is pretty good for shipowners. You have a tonnage tax. For your business assets, you have business property relief,” he reasons.

“A lot of shipowners would love to come to London. They like it as a place to operate. They like the legal system. They like the social environment. What they’re put off by is the taxes, and sometimes the regulation that applies.

“Will we ever match Singapore as in terms of our fiscal regime? I’d love it if we could, but we can move that way.”

All of this might seem a Big Ask, given the levelling-up agenda on which the Conservatives won a sweeping majority last December. But Mr Denholm stresses the potential benefit from an influx of shipowners, not least in terms of jobs.

Ironically, his own company mainly employs Indians, many of them the products of a magnificent English-style former boarding school in Maharashtra state that Anglo-Eastern uses a training establishment. There are only a handful of British cadets, in line with tonnage tax requirements.

“Would that we could justify employing British officers and crew,” he laments. “But the reality is, we own bulk carriers that trade in the international market, and it would be a significant cost disadvantage to employ British officers.

“In fact, one wouldn’t be in the business. It’s sad, but that’s the reality. You have to you have to do the right things to survive. At least we’re still there.”

Mr Denholm obviously loves holding office in trade associations and voluntary organisations. He is, for instance, past president of BIMCO, and current Prime Warden of the Worshipful Company of Shipwrights, one of the ancient livery companies of the City of London.

He is also a previous Deacon of the Incorporation of Hammermen, a Glasgow-based body originally set up to protect silversmithing and blacksmithing, and now largely focused on promoting engineers and engineering.

While it’s obviously nice to give something back to an industry in which you’ve spent a lifetime working, surely extensive extramural activities tend to interfere with the day job?

“Well, yes, it does. However, I’m coming up to the end of my day job, I’m coming up for retirement. I have my successor working behind me and I can spare the time. I’m going to guess it’s going to take a couple of days a week.”

Normally at this point I quiz interviewees about their upbringing, and whether they had any family connections with the sea. But with a fourth-generation owner heading a company founded in 1866, that would have been superfluous.

“When you’re asked to run a family company, you have the duty to hand it on in at least as good shape — if not a better shape — than when you took it on.

“And yes, there is social pressure, from your shareholders are your sisters and cousins and aunts. It’s very important to them that the business succeeds.

“However, there are huge advantages in being a private company. We don’t have to respond to the stock exchange, we can invest long-term. Public companies can’t take the rise and fall of shipping markets.”

But did he have any choice in all of this? Could he have turned around when he was 18 and said, “Sorry dad, I want to be a struggling artist”?

“Shipping has been my life since I was a child. I was taken on trial trips of ships. I was going to launches.

“But I had lots of choice in the matter. I chose to come in. I trained as a chartered accountant. I could easily have followed a career in finance or banking or even accountancy,” he reveals.

Higher education was at Glasgow University, with a degree in accountancy, graduating in 1977. There followed an apprenticeship with a firm called Whinney Murray, now swallowed up by professional services giant Ernst & Young.

“I used this as a period of industrial espionage. It allowed me to get an understanding of the drivers of different businesses, what made them work and different management styles. And I saw the good, the bad and the ugly. But it was a really fascinating three or four years.”

While he was toying with a move to London to take a job with an investment bank, his father rang to say that the accountant at Denholm Ship Management had handed in his notice.

Being the boss’s son must have made his experience as a twentysomething trainee manager unusual. How, I asked, did colleagues react to the reality of the situation?

“Different people behaved differently. There are always some people that are out to do you down. And there are also other people who suck up to you.

“The ones I really admired were the ones who treated me properly and just said, 'You’re just another person, I’m going to work with you like I would with anyone else in that job.' They were great. And I was very lucky.

“Generally, if you come into a family company as a young member of the family, you have to be better than other people. You can’t gain respect without performing. I would say to the next generation, this is not an easy ride.”

The succession now falls for the first time to a family member who doesn’t share the family name. Mr Denholm’s first cousin Ben MacLehose will take the top job at the end of this year, while he steps back into a non-executive chairperson role.

From his first marriage, John Denholm has four children now in their early thirties, and six grandchildren all under three. In addition, he has five stepchildren from his second marriage.

It must be hard remembering all the birthdays, but as he quips: “Electronic diaries are great. You get the two-week reminder as well!”

He has homes both outside Glasgow and in the north London district of Muswell Hill, and at the moment, spends more time south of the border.

His main leisure interest is sailing off the west coast of Scotland, not in the standard shipowner superyacht but in a 50-foot wooden boat he describes as “nothing fancy”.

He is also a keen skier. The current lack of snow in the Cairngorms compared to his childhood days was, he says, one of the things that really brought the reality of climate change home to him.

“I love music,” he adds. “It’s pretty central to my life.” Favoured listening is the post-romantic composers, particularly Rachmaninoff.

“There’s not a lot of time for reading in my life,” he adds with evident regret. “By the time I’ve read the board papers, the only time I actually really read is when I travel internationally.

“I like a nice Jeffrey Archer thriller, a real gripping story. I can eat my way through one or two of those on a trip to the Far East. That’s my pleasure. But when I retire, I hope I get more time to read books.”

His chosen sport is rugby, and it isn’t a coincidence that Denholm is among the corporate sponsors of Glasgow Warriors, a rugby union side that play in the international Pro14 league.

“The Scots are the best rugby players in the world,” he assures me. “We just let the English have a chance of winning the championship last weekend.”