The week-on-week increase of service cancellations by carriers has declined after the release of data suggesting a pick-up in Chinese factory activity. But the prospects for demand for container shipping remain uncertain as the coronavirus spreads into developed economies 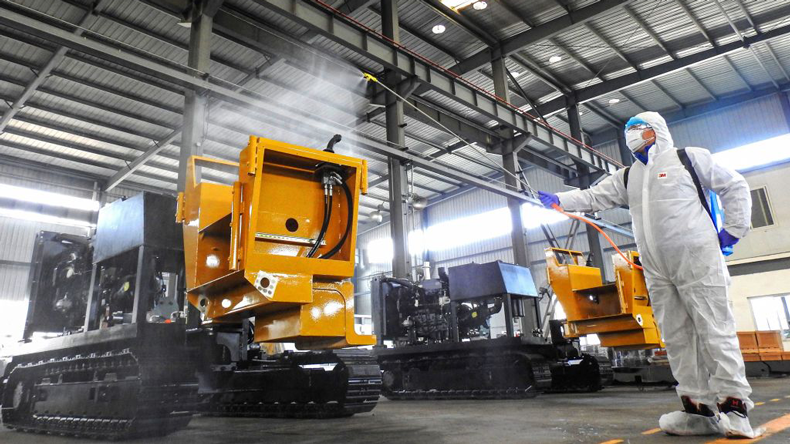 Source: STR/AFP via Getty Images A worker disinfecting machinery against coronavirus in a Chinese factory.

CORONAVIRUS-LED void sailings have slowed following the recovery of China’s factory and logistics activities. But the spread of the disease in other countries has raised concerns about a further disruption to container shipping demand.

Carriers have cancelled 77 services on Asia-Europe and transpacific trades in relation to the virus impact as of the end of last week, up from 70 in the week ago, according to estimates by Sea-Intelligence.

By comparison, the increase rates were both more than 20 cancellations in the previous two weeks.

“The pace of new blank sailings has clearly declined, indicating a belief from the carriers that volumes will slowly be brought back to normal levels,” said the consultancy in its latest report.

The move comes as China is making progress on restoring its economic activity, which had been halted by an extended Chinese New Year holiday and strict quarantine regulation.

The National Bureau of Statistics said on Saturday that the work resumption rate at mid-to-large-sized enterprises in the Purchasing Managers’ Index survey was 85.6% as at February 25, and will rise to 90.8% by the end of March. The rate relating to firms in the manufacturing sector will improve from 85.6% to 94.7% over the same period.

Bloomberg Economics estimated that Chinese factories were operating at 60% to 70% of capacity last week.

French carrier CMA CGM said in a customer advisory on Monday: “Manufacturing activities are gradually picking up, more port workers and truck drivers are returning to their posts, and cargo flow is easing up at the major coastal ports. In short, business operations have now entered the recovery phase.”

However, Sea-Intelligence said the ripple effects caused by carriers’ mass withdrawal of sailings earlier were not yet over, with a risk of a serious shortage of capacity and equipment in the near future.

“Carriers are already pushing rate increases on account of this, and for some backhaul shippers, the coming weeks might well be a matter of whether they can get their cargo moved at all, almost irrespective of the price they are willing to pay.”

Meanwhile, it added that smaller carriers on intra-Asia trade would be under strain to stay afloat, with some having a huge share of their cargo linked to China.

“These carriers are already now suffering a sharp cashflow reduction, and for some, this may well become a matter of financial survival within the next couple of months.”

Some shipping lines have already started to sell ships to shore up liquidity, according to shipbrokers.

South Korean media reported that the Seoul-based carrier had also asked its executives to take a 10% salary cut as part of the cost-reduction measures to help it overcome the current difficult times.

The difficulties facing the carriers, however, may not go away any time soon given that the virus creeping into other regions outside of China.

“The situation in Italy and the US is getting worrisome,” said one executive from a large international port company, adding that the anticipated recovery in cargo demand might fall through if the infection in the western economies could not be contained effectively and hence hurt consumption.

Sea-Intelligence noted the cancellation of the annual Trans-Pacific Maritime conference, which was due to take place in Long Beach, California this week. “This indicates a level of concern — and risk-averseness — that might signal a deeper issue,” it said.

“Such greater risk-averseness might lead to fewer orders, fewer investments, and a higher propensity to reduce inventories versus sales. If this ball gets rolling, the industry will be faced with additional shortfalls in volume in the coming months.”

US southwest ports’ throughput declines due to coronavirus